I happened to be discussing the famous Botvinnik-Fischer game with some friends when Angus French pointed out an interesting anomaly at a crucial point.

The anomaly isn't in the game, so much as in Botvinnik's comments on it: at Black's seventeenth move he gave a couple of short variations which he had apparently analysed in his preparation, but which Fischer sidestepped by choosing a third move instead. 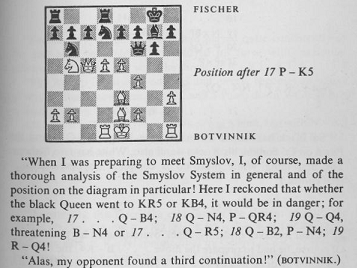 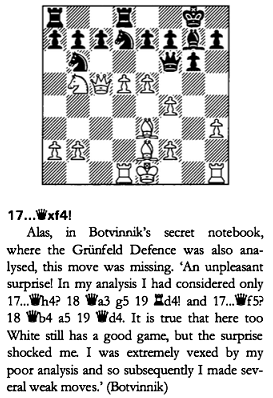 They're two very different extracts purely in terms of text, but in terms of the variations they're almost identical. Both give the line 17...Qf5 18. Qb4 a5 19. Qd4, but whereas Botvinnik as quoted by Fischer gives 17...Qh4 18. Qc2 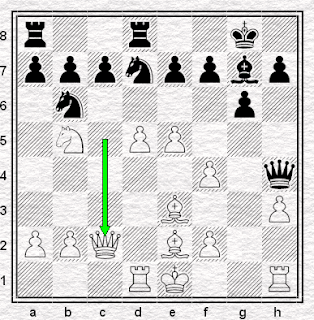 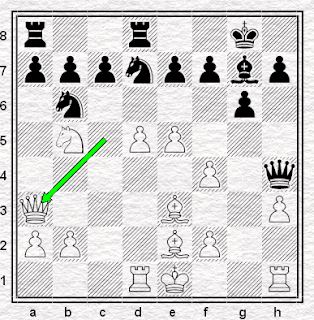 So what? They're two different passages (both translations, presumably, but the content is so different that the originals must also be different). But at the same time, both seem to refer to the same thing, i.e. the variations that Botvinnik said he had prepared when previously studying the position. Which makes it a bit strange that one place has 18. Qa3 and the other 18. Qc2.

I did wonder whether it might have been an error in the original 60 Memorable, but the algebraic edition has the same line as its great descriptive predecessor. 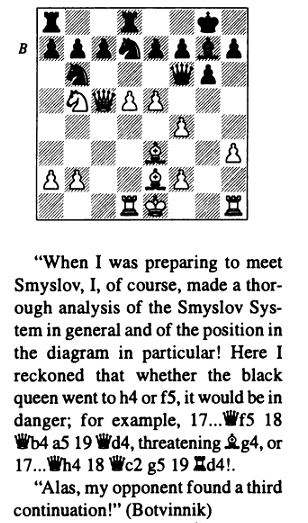 So I'm assuming that there's no error in either 60 Memorable or My Great Predecessors and that Botvinnik did give two different lines in two different places.


[Thanks to Angus French and Pablo Byrne]
Posted by ejh at 7:55 am

Is the pawn on h2 or h3? your diagrams differ here too (I have no idea whether that has any further relevance to whether Botvinnik intended Qa3 or Qc2).

Thanks for pointing out the error - and in correcting it, I've managed to inadvertently delete the image of the descriptive 60 Memorable. Readers are referred to the image of the algebraic version until such time as I'm in a position to fix it (probably Friday). Sorry about that.

(Problem sorted. Thanks ever so much to Angus.)

I suggest you contact Edward Winter. He is already somewhat familiar with the book :)

Botvinnik's comments as given in Chess Life and subsequently in Fischer's book are Peter Clarke's translation of Botvinnik's handwritten Russian text which was provided to Chess Life's agent in Varna (me) two days after the game.
I had offered to save him the bother of writing by having him tell me his analysis which I would then write up, but he conscientiously insisted on providing his own version. I think there was possibly a rest day or a day when he was not playing which gave him time to prepare his manuscript. I paid him $50 on behalf of Chess Life and he seemed pleased with that.
Thus I think the possibility of error in the Chess Life version can be discounted.

So it confirms the line in Kasparov's book, but doesn't appear to be the source, as the comments differ considerably - unless that's to do with editing / translating.

I haven't found any analysis on 18.Qxc7.

A (slightly) longer version of the comment from Leonard:

The quotation in My 60 is from Chess Life, and the text is Peter Clarke's translation of Botvinnik's handwritten manuscript, which he gave to Chess Life's representative in Varna (me) two days after the game. I think the day in between was a rest day or a day when he didn't play, hence he had time to write. I had offered to save him the bother of writing by showing me the variations which I would then write up, as happened with all the other players who gave me CL annotations in Varna. Botvinnik would have none of it, and conscientiously insisted on providing his own text in his copperplate handwriting.
He told me that Bobby had only ever spoken three words to him in his life: when they were introduced at Leipzig 1960 Bobby pointed to himself and said "Fischer", when they sat down to play at Varna they accidentally bumped heads and Bobby said "Sorry", and at the end of the game he said "Draw".
I paid him $50 for the annotation (the same amount that Bobby got for appearing in our Network Three consultation game in 1960) and he seemed pleased with that. The CL editor was also pleased and put the game on the front cover along with a pic of the game in progress.
Peter Clarke was an expert Russian translator so I would discount any possibility of an editorial error in the Chess Life version of the analysis. I guess he gave his views to Kasparov much later and had either changed them or forgotten what he wrote at the time.

So it confirms the line in Kasparov's book, but doesn't appear to be the source, as the comments differ considerably - unless that's to do with editing / translating.

I would not have thought so, and it would be useful to know what source Kasparov was quoting from. (Maybe this, I wonder? I've not seen it but it came out before My Great Predecessors.) But you may well have identified the origin of the alternative version.

A bit more from Leonard that I missed with the previous update:-