He's also the first European to hold the world title since the 1930s.

Thus spake Dominic Lawson, of Magnus Carlsen, when introducing his Radio Four programme on Monday. It's a very strange thing to say, not least because it's obviously wrong, unless we make an assumption which we're not really entitled to make.

Now I'm aware that who is, or is not, a European is far from being a settled question, nor has it ever been. (My wife lived in Turkey for three years. Which continent is that?) But for the moment, at any rate, let's take the view that - as explained here - the boundary between Europe and Asia is denoted by this red line. 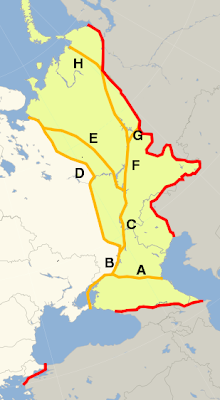 It's also obvious that Lawson's claim depends on another assumption, one that's more robust, which is that we're only including the classical world champions - since FIDE world champions have included Veselin Topalov, from Bulgaria as well as Ruslan Ponomariov, from Ukraine. (Not to mention Alexander Khalifman, who was born in what was then Leningrad. But I am getting ahead of myself.) But of those classical world champions, how many were definitively not European?

There's Anand and Fischer, both from well outside the continent of Europe. But who else? Kasparov is from Baku, which is not far from our red line (it's on the peninsula just below the line on the Caspian coast) and Petrosian was an Armenian born in Tblisi, Georgia. Since both Tblisi and Armenia fall below the red line, we'll classify Petrosian as non-European too.

But Tal was Latvian. Latvia, though part of the Soviet Union, was and is European. As, surely, is the city which was St Petersburg both before and after it was Leningrad. Botvinnik was from there, as was Spassky. Smyslov was from Moscow. (So was Alekhine, but I'll assume we're not including him.) These are cities a long way on the European side of the line.

Karpov, by contrast, only just makes it into Europe - but he makes it. He's from Zlatoust, which, we are told, is a mere eight kilometres from the continental border. Kramnik is from close to the border too: he's from Tuapse, on the Black Sea. Now if anybody can tell me precisely where the Europe/Asia border meets the Black Sea (Sochi? Near Sochi?) I'd be glad to know as I've spent a long time with my face screwed up in front of inadequate online maps, while my personal acquaintance with the region is nil, but I think Tuapse is a little north of our red line.*

This would give us six either Russian or Soviet world champions, since the Thirties, who using the standard geographical definition were and are European. Botvinnik, Karpov, Kramnik, Smyslov, Spassky and Tal. In fact all the Soviet or Soviet-born champions bar two were Europeans by the definition we're working with.

Hence Lawson's statement, which I'll assume for the moment he didn't make without thinking about it, depends on discarding the geographical view, which is fine - and declaring the Soviet Union to be non-European, which is less fine. In truth it's rather odd.

It's odd because I don't recall that being the view when the Iron Curtain was in place. We had Western Europe and Eastern Europe, and - from the end of the Second World War - a very clear distinction between the two, albeit one based on political rather than geographical boundaries. (It was often observed that the concept of Central Europe seemed to have disappeared, and - for instance - that "Eastern" Prague was some way to the west of "Western" Vienna.) Eastern Europe was behind Iron Curtain, but Poles and Hungarians (for example) didn't cease to be European. Nor did Russians.

We also knew that Russia straddled two continents - and it's true that the other nationalities within the USSR were often casually referred to as "Russian". But Asia didn't start at Kaliningrad.

Not that I give a damn where world champions come from, or for that matter who is Asian and who is European. But sometimes I'm interested in people's reasons. In this instance I'm puzzled by Lawson's reasons for making his statement - and if he meant what he said, the only explanation I can think of is that he classifies Soviet players as non-European. No matter if they're from the European side of the border. Or from St Petersburg. Or from Latvia. Why?

Did he mean what he said? Or did he mean Western European but got the two confused?

[* Pages consulted included this and this. Among many others....]
[Dominic Lawson index]
Posted by ejh at 7:55 am

Maybe he's using the Twilight Struggle definitions of continents, in which case the USA and USSR were in no continents at all.

(Twilight Struggle has some rather odd definitions of where the continental boundaries are, mind. Canada's being in Western Europe is my favourite. It makes sense as a game mechanic, but it's not exactly geographically accurate.)

He must surely have misspoken no? I'm guessing you are nervous with the show, compounded with having to play Carlsen.

You will appreciate his column in the latest New in Chess, I think. I wondered whether his "football fan defence" was inspired by this blog.

He must surely have misspoken no? I'm guessing you are nervous with the show, compounded with having to play Carlsen

It's plausible, but given that he's been a journalist for thirty-odd years and has been around famous people all his life, it's not obviously the explanation.

You will appreciate his column in the latest New in Chess, I think.

Heh, I missed that on my flick through the other night (and I won't see my copy again before next weekend, I'm away). I did see an obnoxious column by a friend of his, though.

Actually, according to the Soltis biography, Botvinnik was born in Finland, which I rather liked.

Well, Wikipedia (which may or may nor be more reliable than Soltis, or indeed less) has

Mikhail Moiseyevich Botvinnik was born on August 17, 1911, in what was then Kuokkala in the Russian-controlled but autonomous Grand Duchy of Finland, but is now the district of Repino in Saint Petersburg.

which I decided in the circumstances to render as St Petersburg. But of course Finland would suit the argument just as well.