What Did Duchamp Ever Do For Us?

As promised, here is a follow-up to the mention, a couple of weeks ago, of the "What Marcel Duchamp Taught Me" exhibition - it is on until the 5th November at the Fine Art Society so you might still catch it. There is also a little comment on the Duchamp exhibition currently on in Paris.

But before we get on to that: Tom Hackney has an exhibition about to open in Manchester; details on his website here. You'll remember Tom from our various posts on his artworks based on the chess games of Duchamp. We'll come back to his exhibition in a future post - but for now: what did Marcel do for us?


Duchamp's eureka moment that founded conceptual art (one in the eye for all that "retinal" stuff) was so fundamental that all things "non-retinal" stem from it. Any contemporary artist working in this field has the spirit of Duchamp egging them on.

The challenge for the contributing artists in the Fine Art Society show is for each to define their individual take on Duchamp. They were invited to contribute not only an artwork but a brief commentary alongside defining  the significance he has for them: what - going back to the title of the exhibition - he taught them. And this makes WMDTM especially intriguing. You can try and trace the motivation for the artwork back to Duchamp, and you can explore the artist's explanation as you go.


Here is Chris Levine's seductive piece "Then to Now and Then Again".

It is a gorgeous confection of holographic light, shown-off like a hallowed - haloed - object, in its own room in the gallery. The interior of the gallery building, by the way, and you in it, is the focus of another artwork (mentioned last time) Something You've Already Seen - Duchamp himself was never shy of self-referencing. As you approach Chris Levine's piece you feel you should tread reverentially, as if in a side-chapel of a gothic cathedral, as if you are entering into the presence of an unfathomable reliquary whose meaning is ineffable and unreachable. Did it contain Duchamp's ashes I wondered.

It is the king in the Duchamp set re-created above, although there it is black or white, and the primary blue is actually given to the rook.

Duchamp had himself messed around with perceptual effects, optical illusions almost, in his Roto Reliefs (reprised in WMDTM by Gavin Turk's Rotor Rings), though had abandoned them as a blind alley (and when they didn't sell). If he had lived long enough to embrace the technology, surely Duchamp would have been delighted at the idea of a holograph, and the apparent transubstantiation of light into solid matter: it may be the ultimate trumping of the retinal by the non-retinal. He'd have wanted a complete holographic set, and a holographic opponent (maybe even more than one in the buff).

This is what Chris Levine (in the exhibition catalogue) says Duchamp taught him:


“Duchamp showed us art can be expressed in unlimited forms, an idea or concept that we engage with on our own terms and that ultimately art is in the eye of the beholder.

The chess move is a metaphor for the decisions we make and the infinite potentiality of outcomes in this holographic reality.”

Debatable, but at least we can understand it. We shouldn't expect artists to be as opaquely profound as Duchamp appears sometimes to be in his own utterances - albeit he also seems, now and then, to be taking the proverbial. Chris Levine tells it as he sees it. As for some others in the show, like Duchamp's Eau de Voilette, they bottle it - and duck the challenge of transparency.

There is much more in the exhibition to delight you, tease you, baffle you. Sometimes you get it, sometimes you don't. I have my favourites. If you've managed to get there, you'll have discovered yours.

And if you get to the Pompidou Centre in Paris you'll discover even more, and perhaps see why Duchamp had his Damascene moment: he wasn't (if I might be so bold) really that brilliant at painting, doing the retinal as he might put it. He did, though pull off one or two in a kind of post-impressionist manner: for example his 1910 painting of his brothers playing chess, which we've seen before in these blogs, but we'll show it again - and, believe me, it looks so much better up close and personal, when you can see its scale ; it's almost worth going to Paris just for this.

His chess gets a decent look in at this exhibition: he did a number of studies around his more cubist Portrait of Chess Players of 1911, though I'm afraid my hurried photograph may not enlighten you too much... 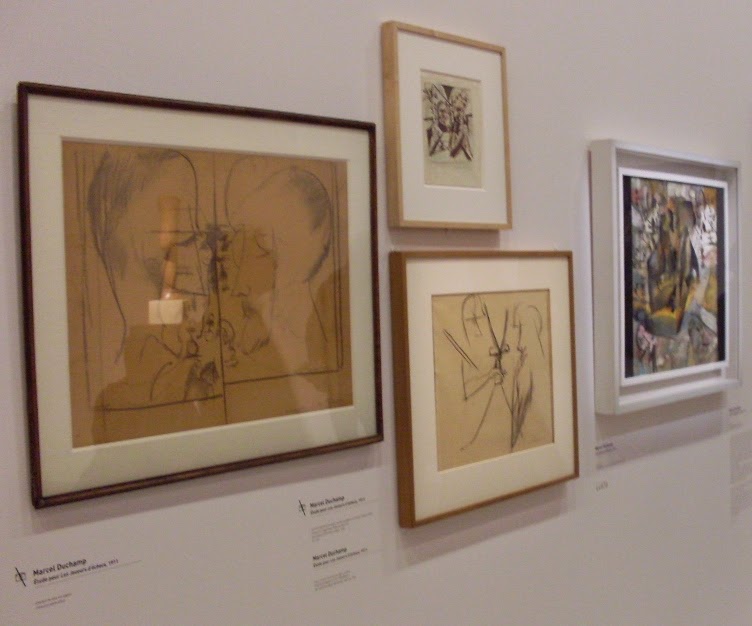 ...and there are some of studies for chess-piece designs by one of his brothers.

One or two more of Duchamp's paintings in the show are maybe seminal: Nude Descending a Staircase for example, though (and this is what makes this show so instructive) it is an admixture of the "isms" of the time: in this case a mélange of cubism and futurism. Duchamp (as this show demonstrates, and maybe we have forgotten) was immersed in the currents of his day: swimming with them, but ultimately hopping out. Some of his painting is indeed pretty derivative (his nudes for example) - maybe even deliberately (typical). But he put his technique to good use when not so much trying to paint for pictorial effect but as an aid to conceptual exploration.

If I may go into over-drive for a moment: it was Duchamp's inexhaustible ideas-production-line that was so remarkable, as is admirably demonstrated in this comprehensive exhibition. He wasn't just a one-trick readymade pony. He generated ideas, reworked them, recycled them, cross-referenced them, put them in boxes, wore them, measured them and called them names (great quote: "the title of a painting adds another colour"*). And secretly lived with one for 20 years.

No wonder the artists in the WMDTM exhibition could find something of their own in Duchamp: he is an bottomless well of inspiration. Like all the other great artists of the twentieth century he was constantly reconfiguring and re-thinking his art work and exploring new ways to articulate them. Sometimes he was arch; often pseudoscientific, alchemic, potty even; invariably he was good for a laugh. And he played chess pretty well, too.

Nice to have a couple of exhibitions to celebrate his enduring legacy, retinal or no, and to give us the opportunity look at him again with a fresh eye.

(*The quote was given in one caption in the exhibition; but I have been unable independently yet to find the source in Duchamp's writings and utterances.) [Note added 2.11.14: It maybe from an interview Duchamp gave to Philippe Collin about "Ready Mades" in 21.6.1967 (see ref here) - if only I could track that down]