"Short", Julian Barnes wrote in 1994, "has a history of graceless behaviour". That was twenty years ago: he has had twenty more years of graceless behaviour since, the most recent manifestation of which I'm aware being his latest column in New in Chess, in which he proves that he can be as just as boorish about the Scottish nation in 2014 as he was about the French in 1983.

The content is not more original than the title*.

The content, it has to be said, does not add up to very much, which is a shame since the style adds up to even less. I appreciate such judgements are a matter of taste, but Nigel's taste is too much for the pompous and constipated, of which the following is a particularly bad example. 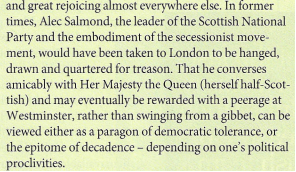 Nigel ought to acquaint himself with Orwell's advice on writing plain English. My personal advice would be for Nigel not to write at all.

That would spare us further pieces like his latest, which has no real content beyond a series of gibes and clichés: Nigel getting his cheque for providing us with a kilts-and-haggis view of Scotland, as if his knowledge and understanding of the country had been formed by reading Hot-Shot Hamish in the Seventies and had neither improved nor been updated since.

Here, for instance, is Nigel applying the full force of his intellect to the question of what constitutes Scottish national identity.


is identity conferred by some occult practice, like wearing a kilt or blowing the bagpipes?

Hilarious. And Nigel goes on to describe Scotland as


the land of lochs

which provokes the thought that just because it's alliterative doesn't make it stylish, but is surely preferable to characterising the country as a

and its point of view as

Kilts. Bagpipes. Lochs. Wee lassies. Tartan. The really impressive thing is to actually get paid for stuff like this, isn't it? At least he spared us the Loch Ness Monster and deep-fried Mars bars.

But there is more belittling to be done, as those tartan grievances are


Scotland was, presumably, correctly deemed not to be a nation.

Whether this is more boring than it is boorish, or the other way round, is again, a matter of taste. What it is not, is worth the time it takes to read.

As if tired of belittling Scotland, Nigel takes a detour late in the piece to belittle a Scot as well.


Talking of Dr Rowson, my fellow three-time British Champion suffered an acute case of separatist twitterhoea in the run-up to the referendum.

The second is that if the referendum debate had been conducted in the same terms as Nigel's discussion of it, Dr Rowson would probably have got the result he was looking for.

But the third is - look, this is rubbish, isn't it? What is the purpose of New In Chess running pieces like this? What do we learn from them, other than that New in Chess has no editorial standards and that Nigel Short has spent the last thirty-one years failing to grow up?

Just because you've played a match for the world championship doesn't mean we benefit from reading whatever rubbish you care to come out with - and if New In Chess did possess any standards they would tell their writers so, or send them on their way. Because just because you've played for the world championship doesn't mean it's all right to be a jerk.

[*EDIT 10 November: Nigel claims not to have said this. See comments.]

[See point four for instance]
[Nigel Short index]
Posted by ejh at 7:55 am

Well said. I would prefer to read a column by Keene than one by Short - that's how awful his writing is.

you mean, you'd prefer to reread a column by Keene?

It's true, the editorial standards of both NiC and Chessbase are virtually non-existent. The same is true to some extent of all chess journals though - anything any GM writes (about anything) is likely to get through regardless of quality. It is a shame for many reasons, not least that those strong players who really do write well are not necessarily seen as special.

This sort of column would see Jeremy Clarkson sacked...

Would you be so kind as to provide a reference for the quote at the top? One wouldn't wish you to be guilty of the same journalistic sloppiness that you accuse others of...

Thank you. And what would Julian Barnes reference be for this alleged quote?

I dispute that I ever said such a thing.

Mr. Horton, that simply isn't good enough. Let us be clear that you are not quoting me, as implied by your introduction, you are quoting Julian Barnes, who is supposedly quoting me, from unknown sources- if indeed any. Unless you can produce evidence that this is an accurate quote and show the context in which the alleged statement was made, I request that you remove the quote altogether. At the very least you must a) show that you are quoting Julian Barnes, and not me b) publicly acknowledge my denial at the top of your article. Otherwise people will imagine you to be a malicious obsessive bent on defaming my character - which of course could not be further from the truth.

Do you intend to do anything about my request, Mr. Horton?

A discussion of the NIC article 'Aagaard vs Short' can be found here:

No surprise that Horton is witholding my last comment and allowing other people (or perhaps himself) to post anonymously. I never expected fairness from this clearly disturbed individual and of course I haven't got it. I will repeat: when are you are going to change the article, Horton?

In Finland you can find the quote with slightly ore context http://hardwick.fi/blog/?tag=english&paged=10

OK. After consideration I have decided that I am happy with the piece as it stands and that Nigel's complaints are adequately catered for by his own comments, to which an asterisk draws attention. If Nigel is unhappy with this he is welcome to contact the blog. He might however be better advised to take it up with the author of the piece to which he has taken offence. This is not hard to do.

Several comments have been delayed or deleted while this matter has been under consideration. Not all of them have been Nigel's.

Comments on this piece are now closed. It is possible that the subject will be returned to in a later piece.