The Surrey County Chess Association Match Books, which we have been investigating in this series (linked at the end of this post), are first and foremost a record of Surrey County matches over the long decades from 1884 to 1967. They provide an unrivaled, and unbroken, documentation of Surrey's players over the period. We can follow an individual's career as they start out on the lower boards, climb through the ranks, and then sink back down the order as their powers decline. There are many such stalwarts of Surrey who did their county proud over decades - and in some future post in the series we will give them their due.

But the Match Books also draw our attention to their opponents (always to be found in the right hand column). Thus, Surrey regularly and repeatedly played other counties around London, or in the Southern Counties Chess Union (formed in 1892) - although others from farther afield also figure. Sussex was the Auld Enemy in county chess terms and was the first one to be joined in battle by the SCCA on 19 January 1884. Middlesex was first engaged on 25 January 1908 - 24 years later.  Surrey has played both counties ever since, but it is the Men of Middlesex who will feature in today's post.

Many of the individual names in the Match Books would pass unremarked - especially if they appear only once or twice - unless there was a personal or club connection to the reader. But there are others who, even when they appear on the odd occasion, would be instantly recognisable to all: like the chap winning on board 2 for Middlesex on the 25th April 1914 - his sole appearance against Surrey.

Well, well. E. Lasker. That's Edward surely (rather than World Champion Emanuel). Edward also played on board 3 for Middlesex against Staffordshire (1-0 v Dr Mellor; Middx 10.5 v Staffs 1.5; BCM Jan 1914 - the above Surrey v Middlesex match of April 1914 doesn't seem to be reported in BCM). He had just won the City of London Chess Club Championship, and he left England for New York in October 1914.

And here is another intriguing one-off; from the line-up on the 24th January 1920. Take a look at board 31 - and the Middlesex player on the right.

Well, well, Wells, H.G. He lost the game (the image above is a bit distorted, his opponent was A.L. Densham), which was enough to give Surrey the match 17.5 v 16.5.  But was it the H.G.Wells, prolific author, sometime politician, and all time Lothario? His dates, incidentally, were 21 September 1866 to 13 August 1946, so he would have been 53 when the match was played. It's a bit of a long shot - but worth checking out.

Well, the first question must be: could Herbert George Wells even play the game? In fact, his writings, fiction and non-fiction, are peppered with references to chess, the most notorious being his diatribe (tongue-in-cheek, possibly) in Certain Personal Matters of 1897 - which is given in full by Batgirl here. In spite of his seeming antipathy - "It is the most absorbing of occupations, the least satisfying of desires, an aimless excrescence upon life. It annihilates a man." -  he is knowledgeable enough about the game to briefly compare the styles of  Steinitz, "our brilliant Lasker", and Bird, whose "victories glitter..[though] his errors are magnificent." He also refers to a game of a certain Mr Lowson, who Batgirl suggests, may have been William Lowson (1814-1893) sometime President of the Dundee Chess Club. EDO has a reference to a Lowson active in 1872-4 in the City of London Club. Whatever his ire, Wells finishes his essay with the revealing: "And yet I have played many games." The answer to the first question must be therefore be "yes."

In late 1920 Wells visited Russia, where he met Lenin and Trotsky. So, the second question might be: where was he in January that year? Michael Sherborne, author of the HG Wells: Another Kind of Life (2010) says (in correspondence with your blogger) that Wells was busy in the winter of 1919-20 engaged in the publication, in fortnightly parts, of his Outline of History. After these "colossal labours, Wells felt the need for recreation" (quoting from Mr Sherborne's book) and (continues Mr Sherborne by email) that wouldn't rule out a game of chess. He adds that although Wells principal address was in Essex, he had bases in London including a flat at 52, St.James's Court near Buckingham Palace, which - it seems to me - might have made him eligible to play for Middlesex. This question earns a "maybe".

So, in detective style, we could say that H. G. Wells probably had access to the means, and might have had the opportunity. But it's a long way short of a smoking gun with his prints on the handle, and I suppose you might have expected some other evidence of him having played formal competitive chess to have turned up before now.

From the doubtful Wells to a Middlesex chap who is bang to rights. He even played later for Surrey County, too. But for this we'll have to dip into the second volume of the Match Books: the blue one. 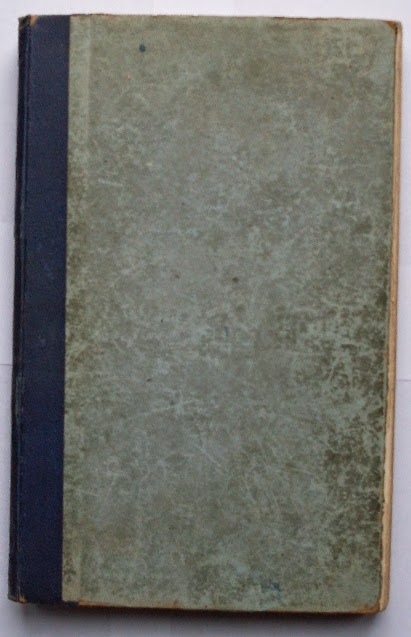 Not a thing of beauty, and not a spot on the bespoke Victorian elegance of the first volume (we saw it here): neither outside, nor in. It shows matches from 1950 through to 1967; thereafter a Bulletin supplanted it as the organ of official record for the county (this snippet from Martin Cath, who himself first appears 30th May 1965, board 33, Surrey v Berks).

Leafing through Volume Two I came across this Surrey v Middlesex match, from 2nd May 1964:

The spread is interesting on several counts. For the venue, for one thing: John Lewis, in Oxford Street - which you can see from the top of the left hand page. The store wasn't open Saturday afternoons, strange as that seems nowadays, so they were able to play in the cavernous restaurant - which guaranteed a decent tea.  Among the top boards you can see Michael Franklin for Surrey (active until a few years ago, now retired from the game) and Ken Inwood (still playing for Kingston CC); and for Middlesex there's Cenek Kottnauer and Bob Wade, also Bill Hartston on 11. I'll leave you to spot other names from the past, some still playing today.

So, for another interesting thing, as I hope you'll agree, take a closer look at board 58.

It is a funny feeling bumping into yourself as you were 50 years ago, when you weren't quite expecting it. Ferreting around in the Match Book I found myself playing again on the 5th December in the same year, against Paul Durrant - who plays now for Surbiton CC and with whom I have crossed swords in recent years in the Surrey club league, though neither of us recognised each other from the previous century.

That was all in the time when I played a lot of junior chess alongside my schoolmate Paul Timson. The master who ran the school chess club, Mr. Honan, was a proper player it was said (though one of our squad memorably managed to beat him in friendly). He may well have been the Neil Honan who came second in the Universities Championships in 1952, and was presumably the "N. Honan" in the Match Book playing Board 10 for Middlesex, v Surrey, 20th March 1954. Whatever: all that was before I took a twenty-five year adjournment, though Paul played on through the decades representing the country in international correspondence chess; more recently triumphing as joint ECF senior champion in 2013.

Paul was then a stronger player than myself - for example playing on 32 to my 58 in the Surrey/Middlesex match shown above, and 17 to my 45 in December 64 - and still remains decidedly so. Clock this fine youthful game he played against Essex in February 1964, and which was published in Chess in March that year. 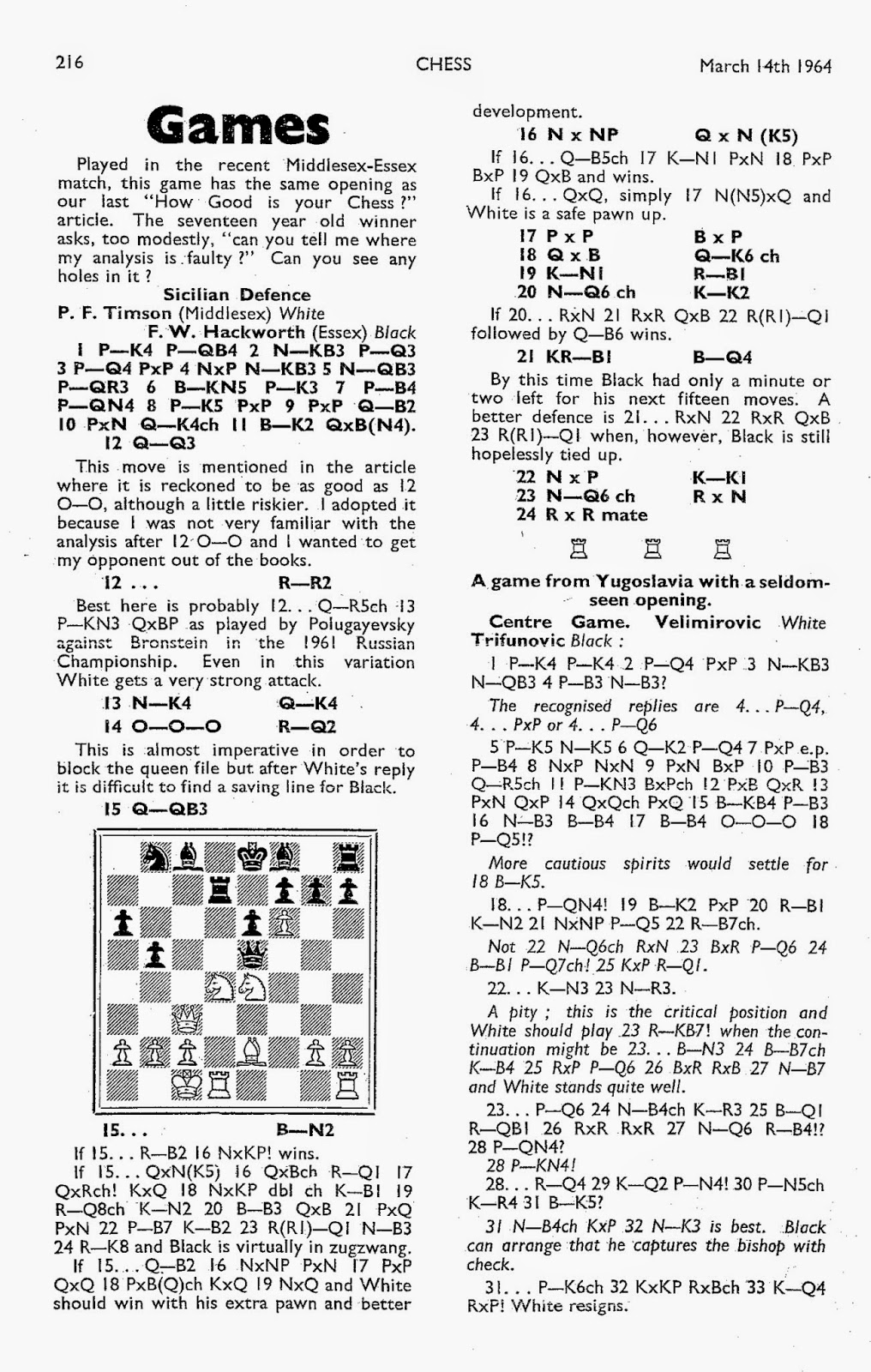 In view of that quaint notation, here it is as we do it these days, with Paul's original notes.


And after that personal trip down memory lane - I hope that you will forgive my self-indulgent intrusion into the narrative - next time we'll check out an Edwardian Middlesex-Surrey connection prompted by the Match Books.

Acknowledgements
Thanks to Michael Sherborne, author of the excellent HG Wells: Another Kind of Life (2010, pub by Peter Owen), and Dr Emelyne Godfrey at the H G Wells Society; and thanks for the memories to Paul Timson, Paul Durrant, and Martin Cath.