Pump Up My Rating? II

I got my first Elo rating in September 2011, right after Benasque. Nine games in Spain, four at e2e4’s Gatwick Open in June and another 4 at the Sunningdale Major in May saw me come out at 2049.

I’d actually I played 12 games in those last two events, but even before I had a rating I had begun running up a big plus score in games that didn’t count - a habit that led to my Elo DWP? post last February. Anyhoo 2049 was not a bad start at all, I thought.

Within three months I had shipped 130 points.

Two years and nine months later, I have finally achieved that goal. 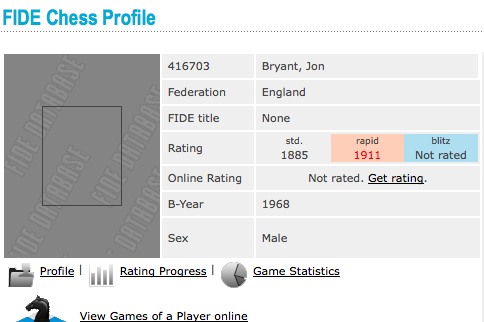 LOL.
But any of us can lose to Alex Golding...

Maybe your initial rating was just too high, and has only now settled down to its correct level, fluctuating around the 1920 mark.

Arpad Elo had this to say in a 1962 edition of Chess Life:

You could be right Niall, although I’m not sure I’m minded to agree!

Of course everybody - or nearly everybody - thinks they’re underrated. In my case I do have a bit of an argument in my favour.

While my elo has been tanking my ECF has actually be rising.

I used to think I was underrated, so I thought I'd do a couple of weekenders in September to pick up a few quick points before the team chess season starts.

Regarding the bobbing cork, it's unhelpful to look too closely at points lost in just one tournament. If I take my last weekender as an example, I finished on 1pt/5, but the last game was on a knife-edge and could've gone in my favour, making it 2/5, close enough to my expected 2.25pts/5.

I reckon these things balance themselves out over time.

My last comment on PUYR says my rating is collapsing. It is.

The thing about the tournaments I play, Nial, is that it’s often possible to score a 200 ECF TPR and yet barely improve an elo rating in the low 1900s.

I agree with you about one tournament though. One game either way can make a big difference.

Is it really only 1879 in Australia, btw? That’s a bit harsh. I did pretty well in those two tournaments as I recall.