A few years ago, back in 2011, the Blog belatedly stumbled on a rather unusual chess painting that was to become the launching pad for a series investigating chess and chess players in Bedlam, and the later Broadmoor (as it became), Asylums. It was Richard Dadd's The Child's Problem, then on view in an exhibition on the art of watercolour painting at Tate Britain.

Now the painting may be seen again, in an exhibition devoted solely to Dadd's art, at the excellent Watts Gallery near Guildford in Surrey until November. As it is not on everybody's doorstep (though Surrey chessers have no excuse...) it is reproduced below. Its reappearance gives us the opportunity to investigate anew this rather odd piece of work, and add a few more comments to extend our analysis of 2011 (for which, see the Dadd series listed in our Asylum Index).

Seeing it again at the Watts, in rather better conditions than at the Tate, is a real pleasure. Here you can really appreciate the painting's miniscule and puzzling detail - at 17 cms by 25 or so, it is about half-way between A5 and A4.

I was fortunate enough, a few weeks ago, to catch a talk by the Watts Gallery's Director, Nicholas Tromans, on Dadd's art - he has written an authoritative work on the artist. He was joined by Victoria Northwood, Curator of the Bethlem Museum of the Mind, in Beckenham - also worth a visit - who talked rather more about the history of the asylum itself. I subsequently took the opportunity to swap emails with Nick Tromans, and the results are discussed below. But first a recap.


Richard Dadd was a Royal Academy alumnus and already an accomplished artist when he was admitted to Bedlam in 1844 after he had murdered his father at the behest of the ancient Egyptian god Osiris, in what we would now call a psychotic episode. He continued to paint, and as his condition eventually stabilised he benefited from a relatively benign regime to produce decorations for the institution, portraits of his doctors, allegorical works, and his rather better known phantasy fairie paintings, such as the one that provides the cover of Nick Tromans' book.

The Child's Problem, which was painted after 13 years inside (Dadd had another 29 to go), shows a just-legible chess position, and we discussed it at length in the previous posts. It had been deciphered by Leonard Barden and Hugh Alexander, and is reckoned to be this simple two-mover:

So, it is a "proper" position, and we had a bit of fun in an earlier post with the fanciful notion that Dadd might have had help composing it from Edward Oxford, would-be assassin (allegedly) of Queen Victoria in 1840 who, according to his doctor's notes, "plays fives, draughts and chess better than any other patient".

In the painting the child has the white queen - and so the key move - right in front of him, yet he is reaching elsewhere. That's puzzling enough from the chess point of view; but just as odd is the figure in the chair, assumed by most commentators to be the boy's opponent: is it male or female (opinion is divided, see here for a detailed discussion); and what is it doing? He/she is on the same side of the board as the boy, and maybe asleep; or maybe playing with eyes closed, "blindfold", or sans voir as they used to call it; or maybe not even playing at all, but waiting patiently as the frustrated child wrestles with a problem specially set for him to solve.

And that's not to mention the stuff on the table (where you can find all the other parts of a complete chess set), and the items in the background. Of these, perhaps the rendering of what might be Lely's Venus, in the middle, is the most poignant. As confirmed by Nicholas Tromans in his talk, Dadd would have been in segregated wards for the duration, and so his attempt at the female figure is rather awkward, to say the least, and has almost reverted to the male.

So, we saw above what the chess world makes of the chess in the picture; but what does the art world make of it: the chess, and the art? This is what the Tate says about the painting on its website:

"The title of this work refers to a position on the chess board which was considered simple enough to have been set by a child. The theme of the opposition of black and white is picked up in the pictures on the wall which relate to the anti-slavery movement, a cause supported by Dadd’s family. On the table are delicate still-life objects, such as the walnut shell boat to the left, which may or may not have significance"

By the way, we questioned that "simple enough to have been set by a child" last time around with the help of Richard James. The "opposition of black and white" idea is picked up in the caption in the Watts Gallery exhibition, which goes like this:

"The 'problem' in question here relates to the chessboard. The wide-eyed child seems poised to win over his much older, sleeping adversary. Dadd has developed the theme of white versus black in the rest of the picture, which includes a white marble sculpture and references to the enslavement of black people. The intricate watercolour belonged to Charles Neville, a senior attendant at Bethlem."

Slightly perplexed by the "poised to win" claim, and the "white versus black" point (when the "black" pieces  are clearly red) I emailed Nick Tromans setting out my concerns as to how the picture had been captioned. He came back immediately with his insights on how Dadd was wrestling with his condition, his situation, and his art, in this splendidly generous response; one that also underlines just how problematic The Child's Problem is.

"Many thanks Martin - this is very useful to have [i.e.your email].

My response - feel free to quote - is that Dadd's methods are hard to follow because he was not necessarily painting FOR anyone : he is not seeking to tell us anything and therefore has no duty to be coherent or lucid. He is working through his own intellectual, compositional and personal "problems" without any interest in elucidating anything for you or me.

1. Dadd moves "sideways" through his thoughts, not towards any object, i.e. without argument: I think in this work may have he has started off with chess, which we know he was interested in, then moved to the idea of black and white, and then thought if those colours as applied to people, i.e. race, and then to the issue of slavery. This chain of thoughts does not 'go' anywhere, is not his problem!

2. Dadd likes to undermine any logic that may have become apparent in his pictures, i.e. to remind himself that their meanings are not tidy : so as to make the chessman red rather than black would be typical of this tendency - i.e. just when you have the key to the work, he makes a move that emphasises that there probably isn't a key. I don't think we can look for any clear rationale for the actual moves on the board, any more than we can explain the child' ruff collar!

And re your interesting suggestion re sans voir, I was reminded of this note from Dadd's Broadmoor doctor:

7 November 1864  Employs himself generally in painting and is at present engaged on a water colour fairy scene which he is executing with great care. He is unable to converse for long without introducing fanciful ideas connected with the spiritual agency and in explaining his idea he becomes much excited and occasionally his eyes have a singularly wild appearance. As examples of his thoughts he told me (Mr. Orange) this afternoon that the power some people have of playing chess without the board was probably due to their having a familiar spirit and that towards some people the chess pieces were evidently unfriendly and that this unfriendliness might be due to the antiquity of  the game.

So art-logic trumps chess-logic; though in view of the inwardness of things in the painting that should probably be "art-psychologic". Even though Dadd used a "proper" position, that itself does not provide a key to unlock the "real" meaning of the painting - if there is one at all; and about that Dadd is no longer here to enlighten us. And, as an afterthought, it's worth reminding ourselves that Dadd subtitled this painting (in his own hand) as "A Fancy Sketch".


"Did you know that there's a fiction based on the image? Reggie Oliver, 'A Child's Problem' (short story) in A Book of Horrors (Jo Fletcher Books 2011)." 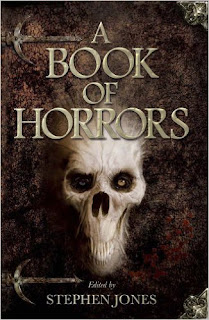 It is a suitably Gothick tale, in which the problem, and chess, have a bit part. This will give you the flavour:

"In the chair behind the table sat Sir Augustus with a large white handkerchief draped over his waxy features...On the table were as usual the papers and a chessboard...For some minutes George [a boy - MS] studied the chessboard. There were five white pieces and three black. It did not take George long to see that white could checkmate in two moves. It was a comparatively simple problem, a child's problem. He began to feel an irresistible urge to make the Queen's move...He was reaching up to move it three squares along the board when he found his wrist suddenly gripped by something cold and hard..."

Yes. Gripping stuff. But it is the legacy of slavery, another reference to the painting, that is more crucial to the plot (incidentally, there is no appearance of Venus). This is what the author has to say by way of explanation:


"The painter Richard Dadd has long fascinated me, and the images from his work have been an inspiration for several stories of mine...One picture of his in particular, 'The Child's Problem', with its strange atmosphere of enigmatic menace, haunted me. It took me many years before I worked out the story behind it - a tale of guilt, power games, childhood and the loss of innocence."

Ghosts on the lawn and skeletons in the cupboard may not be immediately obvious as The Child's Problem's back story. But then, in this almost willfully elusive painting, what is?

(Please see Daddendum 2, and Daddendum 3)
Asylum Index
Posted by Martin Smith at 8:00 am