In the last posting we were discussing the impact of the building of the Berlin Wall on various international chess tournaments that were due to take place that year and the next: mainly the Women's Olympiad, which was cancelled, but also making reference to the Interzonal, which took place not in Amsterdam, as planned, in 1961, but in Stockholm the next year.

Not everything was cancelled, though. Of three major events that were expected, as late as August, to take place1

When I noticed that this event had, in fact, taken place my first assumption was that maybe it didn't include any East German competitors, since I'd seen the crosstable from a previous tournament, the one held in 1957, and it hadn't been enormous. But this was not the case: if we look at the results 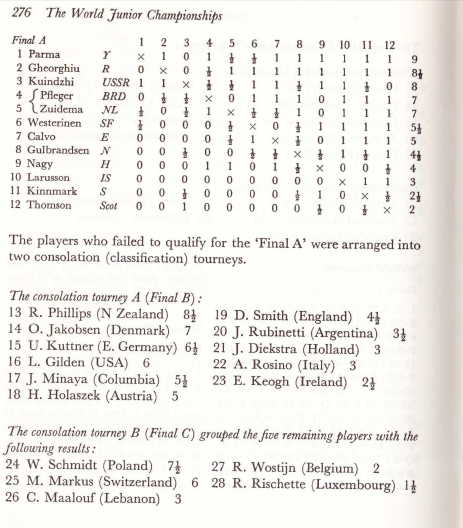 we can see that there was, in fact, a competitor from the GDR.

It's possible to explain this using dates: the tournament began on August 12, 1961 and the construction of the Berlin Wall began the following day. If we were to take it that the NATO policy on GDR visa, which predated the Wall, was neglected where chess was concerned, but then implemented rigorously when the Wall went up, that would be explanation enough - young Herr Kuettner would have already received his visa.

Well, maybe that's what happened. But where the policy pre-Wall is concerned, there's the curious question of the Berg en Dal, or Ubbergen, tournament, or Zonal. Or not. 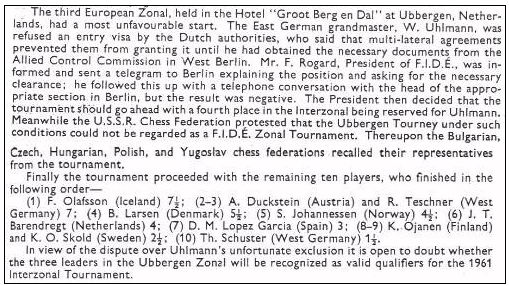 Uhlmann was refused a visa, the other Eastern Bloc nations withdrew in protest and the Zonal was subsequently, as it were, derecognised (and a new tournament organised). Mark goes on to give a clipping from Bob Wade's World Chess Championship 1963*:

This is one of those tit-for-tats in which N.A.T.O. countries have retaliated for the setting-up of the Berlin wall.

But Wade was wrong. It wasn't. It couldn't have been, because the tournament took place in 1960

which is how CHESS was able to give the crosstable in December of that year, and why the report above ("Uhlmann's unfortunate expulsion") is from the BCM for January 1961 (page 24).

I don't know why Uhlmann's appearance in the Zonal was particularly singled out in 1960.2 I guess I'd like to know, as I'd like to know whether Uwe Kuettner had any problems obtaining a visa, whether there were any other examples of the policy being implemented prior to August 13, 1961, and for that matter, when the policy was dropped, openly or quietly, afterwards.

I've nothing further planned on the subject, as it stands. There's presumably a long and comprehensive piece to be written - but not by me - on the effect of the Berlin Wall, the NATO boycott of the GDR and the visa crisis on international chess. But any further information, or just discussion, gratefully received.

[*Originally Arco Publishing, 1964 - see if you recognise some of the reviewers here]

[Thanks to Richard James and Ian Kingston for images]
Posted by ejh at 7:55 am

See here (and comment two below). David Smith. More than that I don't yet know.

We think it may be this guy.