Ever come across Forbidden Planet? 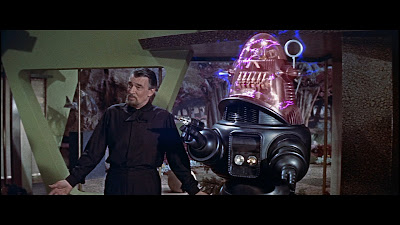 No, not that one. This one. 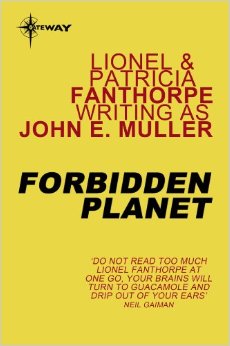 Forbidden Planet, the well-known movie, was produced around half a century ago and is noted for the imagination and intelligence with which it treats its themes.

Forbidden Planet,* by "John E Muller", was written about half a century ago. I've not read it - or not much of it, this being due partly due to the advice offered by Neil Gaiman and partly to the unhappy fact that not much moren than the first chapter is available on Google Books.

But what a chapter it is.

It introduces us to an obscure corner of the universe, which is described as follows. 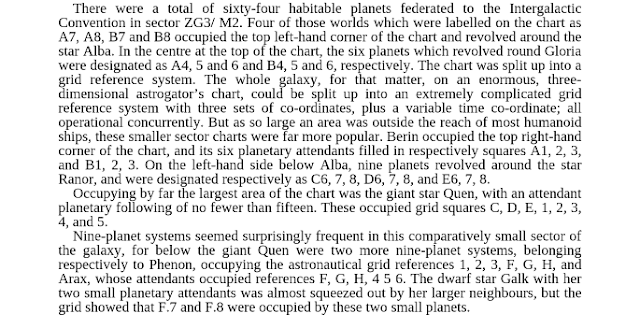 The Great Mystico, it transpires very shortly, is a chap called Johnny Denver.

No, not that one.


If you're more interested in the Great Mystico and the Silver Eagle than in the rest of the passage then you are almost certainly right, but you're also almost certainly going to be disappointed as we will have nothing further to say about them. Instead we shall be pondering what could possibly resemble a "simple chart" possessing sixty-four co-ordinates which are identified using the letters A to H and the numbers 1-8.

While you're trying to work that one out, let me introduce you to the Garaks and the Zurgs.

So the Zurgs, in their 4th dimensional transport, can travel from B3 to D4 and then, if they wish, to F5 and H6.

And what of the Garaks? It appears that they teleport.

And what might these "definite limitations" be? Well, it appears that there are two distinct sorts of Garaks, and so distinct that never the twain can meet. 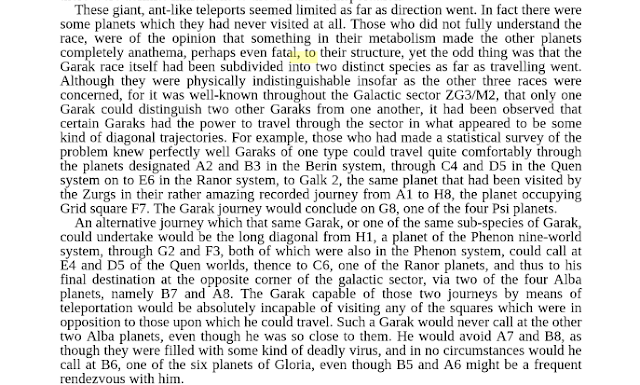 This is actually a bit like getting on the wrong train at Sutton and finding yourself permanently on the Wimbledon Loop. Try the platform opposite!

The Pralos? What are they all about?

It transpires that the Pralos have really powerful transportation, but they too have their limitations, being unable to travel in a straight line from E3 to D4, or from G1 to A7 (change at G7 or A1, please do not leave any baggage on the spaceship). C1 to C8, though, no problem.

Bit through the speed of light. For some reason this reminds me of as a species we are not large like the Whale but there are other species with whom we are concerned today, notably the Gishgilks, who sound a bit like David Icke's lizard people and have powers to match.

On that note (and the invocation of "an extremely high science", whatever that may mean in English) Chapter One comes to a close, as did the excerpt on Google Books** after just a single page of Chapter Two. Which is a particular shame because Chapter Four is called The Opening and Chapter Five The Moves and I was just beginning to work out what the author was driving at. 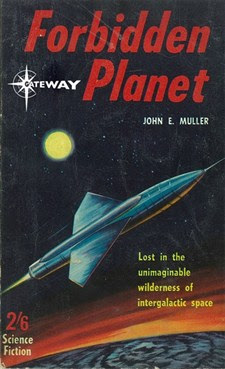 Well, I don't suppose they'll ever make it into a musical. But we may just be looking at a neglected classic. Neglected, anyway. So I do urge you to read it.

Though I have no intention of reading any more myself.