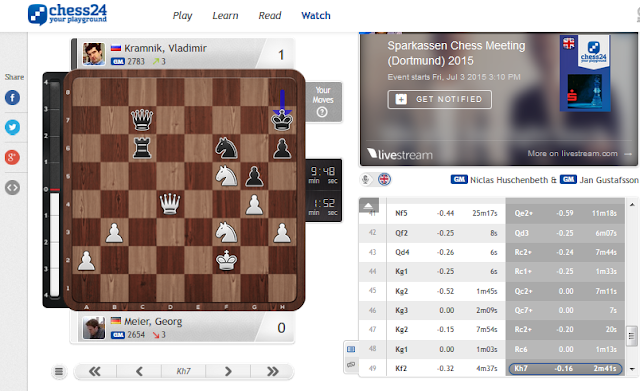 Having lost a winning position against Caruana on Tuesday afternoon, he'd been holding reasonably firm against Kramnik on Wednesday when in the position above he played 50. Ke2?? (50. Ne3, safeguarding c2, seems to be correct) possibly under the impression that after 50...Rc2+ Black wouldn't have time to pick up the a2 pawn, since his f6 knight would now be hanging.

Regrettably this was not so and after 51. Ke3 Rxa2, since 52. Qxf6 runs into 52...Qf4+ or Qc1+, he tried to cover both squares with 52. Qc4 - but then 52...Qb7 threatened to put the liberated knight on d5, where it duly arrived with a bang and a terminal check. Exit Georg to spend the rest day pondering on the point and a half, against world-class players, that he'd managed to turn into none.

But what about that Vladmir Kramnik, eh? Nobody in the world more dangerous when the computer says 0.00. Nobody. Not even Magnus Carlsen.

Here's a bunch of noughts from his game against Nepomniachtchi the previous day. 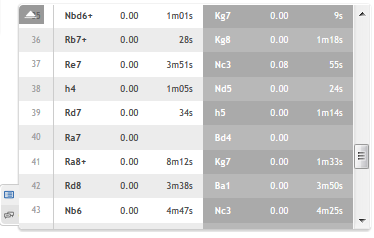 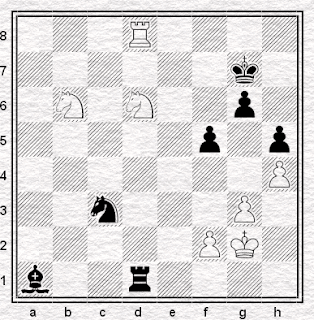 Kramnik had been much better earlier on and let it slip, but undiscouraged by events, he just kept shuffling his pieces until they came up in a pattern that gave Nepo a chance to go wrong. He came up with 44. Nbc8 Kf6 45. Rd7 Nd5 46. Nb6, which just constitutes moving a knight back and forth and shifting the rook one square: but it's more what Black had done, while White was shuffling, that was the point, since after 46...Be5?? 47. Nb7!! 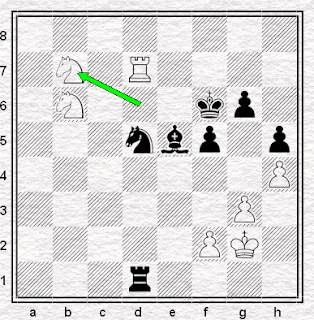 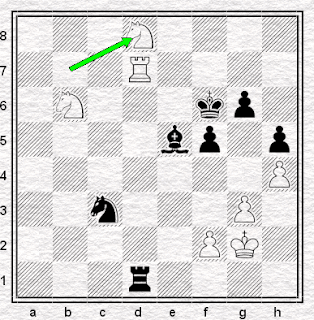 Naturally I was reminded of the similar sequence in his game against Aronian in the 2013 Candidates, in which the evaluation similarly stood at 0.00 for, if I recall, about ten moves, from roughly this position 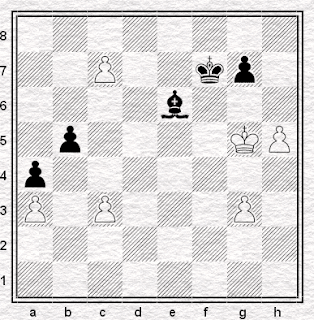 to precisely this one and you will probably recall that

If you are able to remember

then you're doing better than I am, but we'll leave that for another blog. What I do remember is the long string of 0.00s and then - when it seemed that not only was there zero on the monitor but there was nothing left to play with - the numbers all of a sudden shot up and up.

That's drama, that is. It's a kind of drama Kramnik seems to specialise in. For all sorts of reasons, but including this, I often think he's my favourite among all the leading players of the past forty years.

Obviously this does show that 0.00 means something different to what it seems to mean, and what it means is not "this game is dead", even if it stays that way for move after move. This might be the computer misleading us, in a way it is, but another way to look at it is us learning about the limitations of the computer: once you've seen this happening multiple times you start expecting it to change, whereas previously, you might have been expecting an imminent draw.


"How did you go bankrupt?" Bill asked.
"Two ways," Mike said. "Gradually and then suddenly."

So when I was watching Kramnik fiddle his knights around against Nepo, I was thinking of the game against Aronian. And when the numbers started changing - just a little at first, just enough to let you know it maybe wasn't so simple any more - I knew something might be happening. Then when the bishop went to e5, they went up like the whistling of a kettle.

Sometimes they mislead us and sometimes they inform, but computers illuminate far more than they obscure. And sometimes what they provide us with is all the more illuminating for having been previously hidden.

Because that's real drama, the sudden appearance of the deus ex machina: and there's more drama to be had from seeing it, from knowing about it, as it happens, than from finding out much later, only after the handshakes and everyone's gone home.
Posted by ejh at 7:55 am