Fighting to the end My first encounter with Browne came in 1983 at the players’ meeting before a televised tournament in Bath. The organisers explained that due to the strict time limit (2 hours for all moves), players were expected to act as gentlemen and and not try to win dead equal positions on time. “Can you define gentleman?” shot back Walter, peeved that his desire to win from any position might be curbed.


By the time you read this I’ll be about halfway through the tournament in Sitges. To put mildly, I do not expect to be amongst the leaders by this point.

There’s a lot written about how the differences between the sort of people who do end up leading the field in European Opens and people like me who do not. They are better of chess, of course, but how are they better?

One of the things to which amateur chessers could pay much more attention should we genuinely wish to improve, is that the strongest players simply try harder. I’m sure we can all think of an exception to the rule, but by an large the higher the elo, the harder they are to beat and the longer they try to win.

As Jacob Aagaard put it in his essay Danes Eat Fish for Breakfast - part of Quality Chess’s Grandmaster versus Amateur collection,

Probably the most important attribute for a grandmaster is his tenacity. If he wants to win a game, he will fight until there are only kings left on the board, Even if he has a bad day and spoils the advantage in the opening and fails to make progress from his slight advantage in the middlegame, he will press on until there is no hope left. This is partly because grandmasters are stubborn, a quality which is invaluable in the hunt for the title, and partly because they know that this attitude brings result more often than their amateur opponents expect.

Danny Gormally has something similar to say in Play Like the Pros. 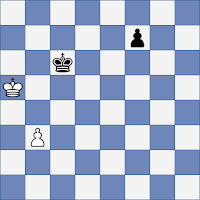 Walter Browne was famous - or do I mean notorious - for his will to win. He might have wanted to  secure a full point from any position, as Rogers put it, but today’s is one that got away. Clearly Browne would have found the solution had he been looking for it. He must have already mentally given up the game as drawn. It’s not, though. Not even for a gentleman.

Anyhoo, whether I’m successful or not in playing and playing until I get a Sitges king and pawn endgame I’ll let you know next week.

Funny how little even the pros knew about the game in 1983. Today's equivalent of 1983-vintage Browne would find this pretty trivial; the idea is just better-known now.