Last week Angus (via Tom) tipped us off that Channel 5 were going to show a programme about Susan Polgar called My Brilliant Brain. The central premise was that Polgar is a "genius" who possesses a brain that is different to those of ordinary people.

To demonstrate Polgar’s “fundamental chess ability” of “memory” they conducted an experiment where she was asked to reconstruct a chess position after just three seconds to view it. As the camera first panned over the board we saw this block of squares:- 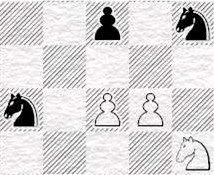 My instant response was, “Hang on a minute that’s …”, but before I’d finished the thought the camera had moved on to another part of the board.

This distinctive formation of the castled king position and rook on e8 and the bishop back on its home square f8 confirmed that Polgar was about to be shown a known theoretical position.

When we got to see the whole board it showed a position taken from the Zaitsev variation of the Ruy Lopez. It is usually reached by 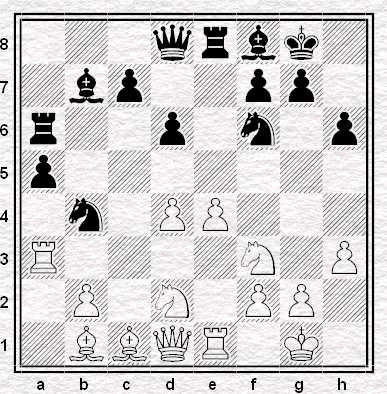 So Polgar reconstructed the position quickly but it’s hardly evidence of her genius if I, an average club player, can do exactly the same thing. Indeed, when I mentioned this to Tom the following day all I had to say was “…bxa4 line of the Zaitsev” and he could recall the precise position too – and he didn’t even need to see it.

The point of the experiment was supposed to be how Polgar used ‘chunking’ to keep a chess position in her short term memory. Instead of memorising the positions of individual pieces she remembers familiar sub-formations (chunks) and reconstructs the board that way. This was confirmed when a non-player placed pieces on the board at random and she found it impossible to reconstruct the position.

The fact that a known theoretical position was used doesn’t invalidate the chunking idea, indeed the nature of my own responses seem to prove it. What it does show is the fundamental dishonesty of the programme. In truth it was Polgar’s long-term memory being tested, not her short-term memory.


Later on we saw brain scans taken of Polgar firstly while she was shown photographs of famous chess players and then while she was shown diagrams taken from her own games. During the latter she was asked to think as if she was playing chess considering her next move.

“These are the first scans of world champion’s brain playing chess.”

Well, not really. Looking at chess diagrams then thinking about a move, and actually playing chess are not at all the same thing. [And I note in passing the ‘world champion’ tag is misleading. The average person watching the programme will have assumed that meant Susan Polgar had once won the championship of the entire world and not have known it was just the female half of it.]

The programme showed the results of the scans and claimed that the part of the brain Polgar uses to play chess is exactly the same as is used to recognise faces. Apparently this is known as the fusiform face area.

Now this is an interesting finding but what is actually being said here? The programme claimed Polgar’s chess playing ability is entirely based on her ability to recognise familiar positions and formations and that her brain is actually different to everybody else.

“Astonishingly, Susan’s brain has hijacked the fusiform face area and adapted it to chess.”

What of other Grandmasters? What of me and you? Do we also use the fusiform face area to recognise chess positions or is this unique to Polgar as the programme implies?

What about those scans? The programme doesn’t make clear whether the scans we saw were taken when Polgar was looking at the familiar chess positions or when she was thinking her next move. Would scans at these different times show similar results or would there be differences?

In any event, is it so astonishing that Susan’s brain uses the fusiform face area to recognise chess positions? Even the laziest research on the internet (i.e. looking up 'fusiform' on Wikipedia) suggests this area of the brain is also used to recognise, amongst other things, words and numbers too. Not looking quite so surprising now is it?

These are the key questions in assessing the programme’s fundamental claim that Polgar is a genius and that her brain has become different to yours and mine. Sadly, My Brilliant Brain didn’t ask these questions let alone answer them. Mind you, given the programme blatantly lied about Susan Polgar being the first female grandmaster and employed numerous other half-truths and misrepresentations, I’m not sure I’d have believed it even if it had.
Posted by Jonathan B at 4:09 pm

PS:
I forgot to mention a quite funny moment towards the end of the programme when Polgar's son wins an under 7s chess tournament and collects a trophy that's taller than he is.

I thought the programme pointed out that Polgar's brain is not different to ordinary peoples', and suggests that anyone could achieve this level of ability if trained in a certain way. She may not be seen to be a genius to seasoned chess players, but people who don't play chess, who this programme was partly aimed at, would call anyone with her level of ability, and doing things like winning at blindfold chess, a genius. The choice of a familiar opening position, which she was asked to recreate may have been an unfortunate one if it was only testing her long term memory, but I'm sure she would have done just as well with a 'typical' chess position which was not instantly recognisable.

I've won many games of blindfold chess - I must be a genius :D

The programme doesn’t make clear whether the scans we saw were taken when Polgar was looking at the familiar chess positions or when she was thinking her next move.

Actually it did. It was explained that the photographs were of famous chessplayers (I recognised Tal & Fisher) and that the chess positions were taken from her own games.

Other than that I also found the programme somewhat misleading, sensationalising and annoyingly cavalier with facts.

you're right in what you say about the photos of chess players and the positions take from Polgar's games.

What I meant was the programme doesn't make clear whether the second set of scans were taken at the point she saw the position or, say, a moment or two later when she was thinking of what move she would make.

This may or may not make a difference to the brain scan but certainly does make a diffence to any claims on what the scans actually show.

the programme did indeed claim anybody (or at least many people) could achieve similar results with similar training.

It also pointed out (correctly according to my meagre understanding of such matters) than or brains physically change as we create new memories - and thus Polgar's brain has become different to yours and mine because it has become "adapted" - their word - to remember chess positions.

RE: "I'm sure she would have done just as well with a 'typical' chess position which was not instantly recognisable"

Perhaps so. Why didn't the programme makers give her just such a position then?

The fact remains, what the programme makers said was happening, and what was actually happening, were two different things.

To be really sneaky, you should take a well-known position like the one they used - but move eg the white king to h1.

Perhaps Susan Polgar said, actually that's quite a well known position, maybe you should try another one. Then the director said, I can't be bothered to set that up again - no one will ever notice.

Maybe the chose it in advance as a slam-dunk, knowing she couldn't fail to get it right, and so help prove their point?!

But that's just it Tom. By doing things as they did they were proving anything but their point.


btw: another area of dishonesty in the programme ... That guy Polgar was playing at Blitz chess in the park. He's her husband. Curious the programme didn't think to mention it don't you think?