Chess, The Theatre, A Hospital - and, Photographs.

Remember this - The Chess Players, a chess-based theatre performance in St George's Hospital, Tooting, that ran early November? And that also featured games between Streatham and Brixton Chess Club members and the staff, patients and visitors of the hospital? Well, we not only have our First Team Captain's rather amusing account of his loss (!) to a passerby at the event, but some intriguing photographs that I'm sure will make every reader wish they'd been there to see the real thing. 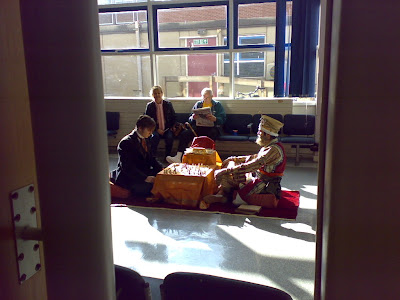 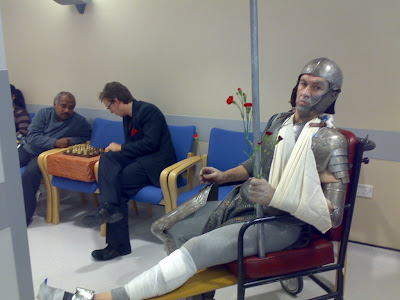 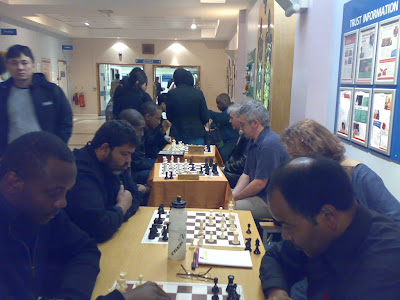 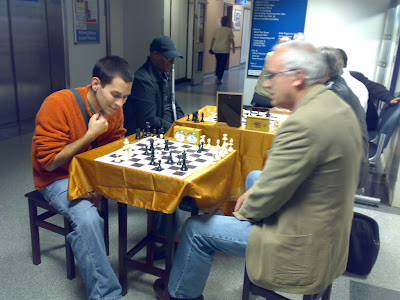 And here's what happened to Captain Martin Smith:

"A random passer-by was inveigled in to playing my good self. After we had sat down he began explaining that he was writing a book on how to generate and solve Sudoku puzzles that would have unique solutions. He'd written his own computer programme and wondered how he could get a publisher. I pinched myself and mentally checked whether St.George's had a psychiatric wing. He then explained he was also planning to write a chess programme based on control of squares, ignoring tactical considerations completely (more pinching and reality check). He'd stopped active playing five or so years ago when he was with Hayes chess club graded 135 or so. He then wheeled out a pretty decent Scheveningen Sicilian a la Kasparov and out played me positionally before finishing off with some pretty back rank tactics. Smith 0 – 1 Random Passer-by."

How about for the 2nd photo "The two knights defence is a very dangerous opening!"

inveigled??? Does Martin think he is Nigel Short with the language he is using?
Andrew

Martin is the new Nigel Short?

We'll find out if he's the coach of the Iranian women's team and if he ever claims to have shagged the random passer-by's girlfriend.

If he says yes to both then clearly Martin is indeed the new Nosher.