Poets do not go mad; but chess players do. Mathematicians go mad, and cashiers - but creative artists very seldom. I am not attacking logic: I only say that this danger does lie in logic, not in imagination.

Thus spake GK Chesterton. Was he on to something? It seems to me that there is some strength to what he says, even if it is not logic as such that's to blame, but its applicability to chess and its inadequacy in the face of chess. It's the capacity of chess both to be reducible to logic in principle and to be beyond it in principle: part of the obsessive, addictive quality of chess is in the contrast between the near-infinity of variations, on the one hand, and their simplicity, their closeness, on the other. 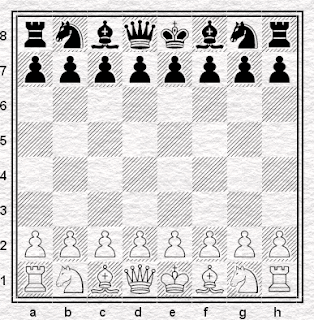 If it were simply about imagination, creativity, the problem wouldn't arise: the boundaries would be non-existent, the possibilities limitless. It's precisely because the chessboard is so small and the pieces so circumscribed, that there is a problem. The logician grasps the problem and the method: and being a logician, they know that a solution, logically, is there. But as they have no way of arriving at it, it's a sequence with a beginning but no end. That's the trap: that's what brings on obsession. And obsession brings on madness.

Do enjoy the festive season.
Posted by ejh at 3:45 pm

quite a few creative artists were, in fact, notably, "mad", i'd say.

Funnily enough, I had that line in my original draft...

I think the flaw in the quote lies in the line

It seems to me that this compromise with the theory being proposed allows one to reverse the subjects of the quote without changing its validity.

On the otherhand, I also have known a few arty types (broadly speaking rather than poets) and a fair few of them have indeed been quite bonkers.

I think in principle this is true, but I do think that there's an element by which chess channels and intensifies obsessiveness as well as keeping the lid on it by giving it something to do.