Knight to the rescue - the answer 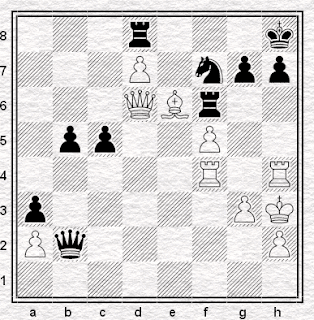 The remarkable reason (which may or may not have been given in Wednesday's comments box by now - I'm on holiday in the Basque Country and prepared this posting in advance) occurs in the position after 40...Nf7 41.Qe7 Ng5+ 42.Kg4 Nxe6 43.fxe6! Rxf4+ 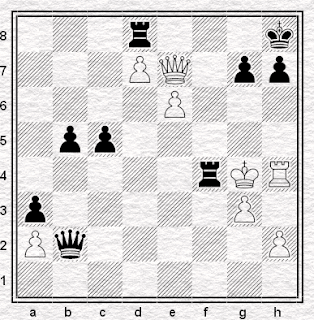 Now, although any capture leads to a draw by perpetual check (beginning 44.Kxf4 Qd4+ or 44.gxf4 Qg2+) 44.Kh3!!! is an extraordinary winning move: see the game below or, better, work out the variations yourself first.

(I was particularly pleased with the win: I've now gone ten games without defeat in competitive email play and may be close to winning a tournament outright for the very first time. After something like eight years of trying.)

By curious coincidence, I also just won an internet game where I sacrificed a rook for promoting pawns: Spaceman-Ihaveagirlfriend, surfdudeonline.net.

Not in the same league though, it has to be said!