Knight before both bishops 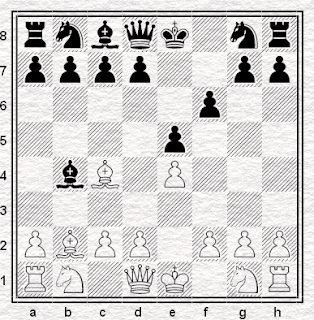 I remember coming across this unlikely gambit in an old David Levy monograph on the Sokolsky Opening, which I used to play as a teenager. My reaction, at the time, was bafflement: "how did they think that one up?". I was even more surprised to find a player called Fischer on the White side of the gambit, which I therefore assumed to be some other Fischer, of whom I had not heard, until I discovered that it was a simultaneous game played during Bobby's famous US tour of 1963-4. (He played his famous Evans Gambit offhand game against Fine not long before - perhaps that's where he got the idea of trying out this line.)

I still confess myself surprised, though - surprised that Fischer played it, surprised that anybody ever played it. Surprised still more to discover, while writing this piece, that Tartakower turned over both Reti and Colle with the gambit. Nevertheless, I still think it's a load of old bosh, though I've never actually played either side of it: as White I always bottled out with 3.b5, and as Black I normally go 2...Bxb4, if you can talk about "normally" where such a rare opening is concerned.

What's also surprising about the sequence is that it involves the development of both White bishops (indeed, of three bishops in all) before any knights have come out. It's startling, when you think about it, how rarely this is the case, for either side. In fact I can't, even after some thought, think of a totally respectable variation where this is the case.

There are various Modern Defences where the Black bishops go to g7 and g4 - selecting one particular move-order in that opening is impossible, but as White I might very well face a sequence like 1.Nf3 d6 2.c4 g6 3.Nc3 Bg7 4.d4 Bg4 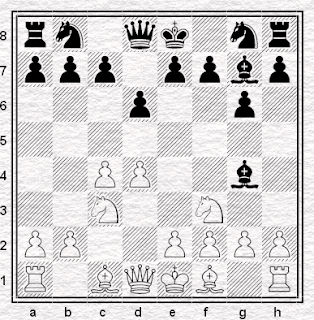 which has been played by rather more grandmasters than the aforementioned Sokolsky gambit. 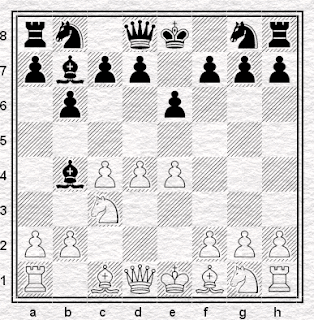 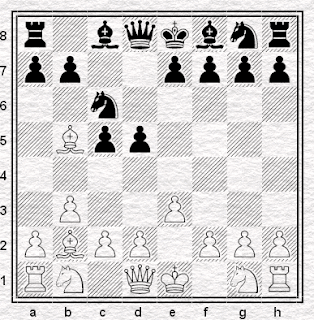 which is also fine for the side deploying the bishops, but which may not be the other side's best choice.

Which, if it says anything, perhaps says that there may well have been something in the old chess proverb "knights before bishops": even if it be only that its opposite, "bishops before knights", very rarely applies. One wonders why. Because they're targets, when developed too early in the game? Or because knights both attack and defend, more easily, pawns (and squares) in the middle of the board?

One reason may be the simple fact that you have to move a pawn to develop a Bishop which therefore takes more time than a Knight which can just jump out straightaway.

I'm not sure "Knights before Bishops" is a proverb - I seem to recall it was a rule added by Lasker to those of Tarrasch!? I wonder if the reason is more opening-historical than anything, discoveries that 2.Nf3 is a better move than 2.Bc4 after 1.e4 e5 or 1...c5 for instance. Still, this is all vague memories & guess work, rather like my chess play in fact...

Usually the knights know where they want to go - f3, c3, f6 and c6 are the squares from which they will likely exert most influence; otherwise e2, d2, e7 and d7; and, as a last resort, h3, a3, h6 and a6. For bishops there are more squares to choose from and it's often less clear which might be best. So, I think there's a practical argument for "knights before bishops".

Does Watson say anything about this in his Chess Strategy books?

It would be interesting to see an analysis of where pieces first went (or whether they were still on their original squares when a game ended) in games between GMs. Also, some stats about the order in which pieces were developed.

Fischer also played the exchange Caro-Khan in which which Be3 and Bf4 occur before knight moves... and, as White, he liked his white-squared bishop...

I'm not sure c3 & c6 are that definitive as squares for knights. Eg, in the Ruy Lopez for white Nc3 gets in the way of c2-c3, which supports d4. In the Queen's Gambit Declined, an early Nc6 for black gets in the way of both c6 and c5. In the Hedgehog, the b8 knight often finds access to more promising circuits via d7. By contrast, blocking the f-pawn with the knight doesn't typically interrupt the usual ideas of the mainstream openings.

To Watson, this seems to be an example of an old rule ("knights before bishops") being invalid in modern chess, where we just worry about the concrete positions. My gut feeling is that he tends to go too far with this stuff; if you don't call it a rule but a guideline, and acknowledge that of course there are exceptions... well, I'm with you that there's probably a grain of truth in there.

Presumably it wouldn't be awfully difficult to take a large database and figure out the average move on which each piece is first moved. It might be interesting to see whether (as Watson would presumably contend) modern players do indeed develop their bishops earlier.