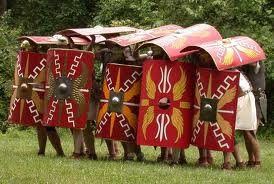 Although I don't have the exact quote to hand, Viktor Korchnoi once explained why he didn't play the King's Indian with reference to Soviet military tactics in the battle of Stalingrad - or possibly the siege of Leningrad, which he lived through as a boy. He compared the rush of Black's kingside pawns to the way in which soldiers of the Red Army would rush across no man's land in the face of unremitting fire, hoping that the survivors would overwhelm the enemy guns.

I was reminded of this recently when playing through a game Sengupta-Safin, Sangli 2000, while looking at certain lines in the Exchange Spanish in connection with a current correspondence game. On move 22 Black moved a pawn from c7 to c6 and thereby managed to create an unusual pawn formation: the pawn square. 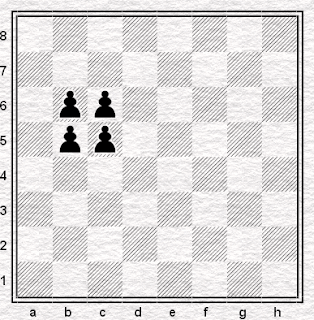 If Korchnoi was reminded of the Second World War, I'm put in mind of all those squares of soldiers at the battle of Waterloo: or maybe of the defensive formation of Roman legionnaries, the testudo (tortoise) which proved so successful against everybody except Asterix. I'm also reminded a little of the famous knight square from the thirteenth Kasparov-Short game in 1993. But maybe what works with the infantry isn't what works with the cavalry.

It looks potentially very effective to me: the pawns mutually defended and lots of squares attacked. Are there any other examples of the pawn square from recent (or other) grandmaster practice? Might it come to vie with the Irish Pawn Centre in the popular imagination?

(and a large PGN database) is your friend for this sort of thing.

Running a query over 670,000 games downloaded from TWIC, I found this configuration just 133 times. The owner of the pawn square won 52 of these games and lost 32, so probably there isn't too much wrong with it.

Here is a highly entertaining game Pachman-Fischer, featuring the testudo.

This really isn't coming out the same when I publish it as when I preview it...

I'm trying to point you at Chess Query Language, .

I think there was a famous Kasparov-Karpov World Championship game with this pawn feature.

Heh, that's excellent. Thankyou for showing it to us.

Another pawn diamond ... Kasparov-Anand, 1991 as mentioned on this blog just a week or two ago.

Not in the middle of the board though.

can somebody run the query to find occurrences of pawn box and pawn diamond? thanks

Korobov-Bogner had a semi-mobile pawn-square for Black (fg45) that morphed in a couple of moves into an Irish pawn center when attacked by h4. With an underpromotion (for the losing side) to boot in the cleanup.

Game seems not to be at chessgames or other places.