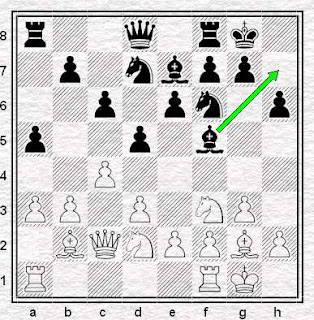 [Edit: Forgot to include this originally ... don't forget tonight's the night of the chess club quiz. Kick-off at 7:45pm at the usual venue in Woodfield Grove. See you there.]

Today's position arose in game twelve of the 1958 Botvinnik - Smyslov match and then again more recently in the somewhat less exalted circumstances of my game for the S&BCC London League 2nd team against Athenaeum earlier this month.

My opponent played 11. ... Re8, to my eyes an eminently sensible move, but Smyslov, and if you weren't already familiar with the game the arrow is a bit of a clue, retreated his Bishop.

I know this is not an uncommon manoeuvre in this line, see the near identical positions below, and (I think) I understand the general point ... the Bishop is a bit exposed on f5, potentially vulnerable to Nf3-d4 or perhaps e2-e4 at some point so tucking it away safely on h7 removes it from danger. What I'm totally unable to grasp is why he needs to do it at this precise moment.

OK, the Reti is hardly the kind of opening where every tempo is crucial but consider Petrosian - Furman, 1975, which after Smyslov's retreat continued,

and now White played 14. Ne5 ("!" - Ray Keene *) blocking the advance of the e-pawn. Had Black not played the Bishop retreat first, of course, White wouldn't have got there in time. 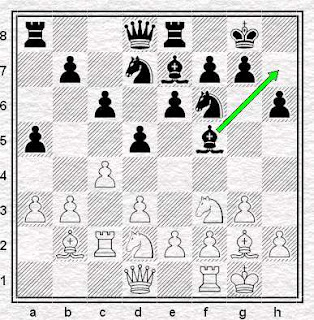 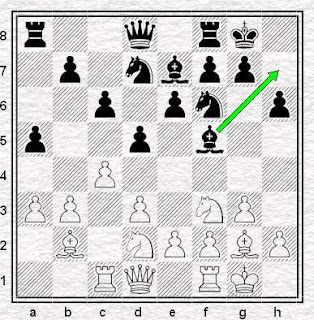 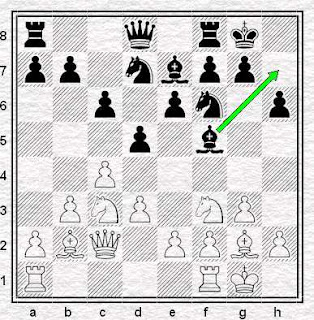 
* BTW: I found all the material for today's post in Ray Keene's Flank Openings - a book unlike a lot of RDK's output in that it's pretty useful.
Posted by Jonathan B at 9:10 am

Not so much fannying around, Jonathan, as playing a move you know is useful when you're not absolutely sure what you'd like to do next. It might or might not not be an entirely accurate move order, but those are only established - if indeed they ever are - over many years of play when all the reasonable alternatives have been tried out and evaluated. So a grandmaster may well make a safe, useful move, and see what happens next. Like Kh1 in the Sicilian.

it was played 17 years after the Botvinnik - Smyslov game.

Mind you, given the relative lack of games in this line at the top level perhaps "... all the reasonable alternatives ...." had still not been tried.

I have played Bh7 in a very similiar if not exactly the same position. It gives black a move extra to react to e2-e4 rather than being forced to move the bishop. I think in my game, Nd7-c5 would have been very strong after e4. Looking at this position Nc5 might also be strong after e4.
Andrew

Thanks for that Andrew,

so perhaps in Petrosian - Furman had Black not played ... Bf5 first, White could have answered

... Bishop retreats (with or without an exchange of pawns) and then White has time for

b2-b4 taking control of the c5 square and preventing the Knight move you mention.

Is that the sort of thing you have in mind?

I had a similar position too in a county match on Saturday. It was same as the Botvinnik-Smylov and JB-LL2 Opponent position except White's queen was on d1 rather than c2 and her rook was on e1 rather than f1 and I had Na6 rather than Nd7. I also played Bh7 as I often do in such positions.

The reasons I played my bishop to h7 were:
1) In anticipation of White's e4
2) To secure the position of the bishop on the b1-h7 diagonal (often the position will open up and this bishop will be very good)
3) As a useful waiting move - I'd rather wait for my opponent to commit themselves a bit more before I decide how to commit myself. I didn't play Re8, for example, as I wasn't sure that the rook belonged on e-file. In fact, in the game (which was drawn in 15 moves, btw, after no exchanges had been made!), I played Rfd8.

I noticed you'd played ...Na6 instead of ...Nbd7 in a similar position at Wimbledon last season (against one of their Polish guys I think).

Perhaps you're right about delaying ...Re8. I've seen some games where Black plays ... Ne8 to allow ... Bf6 and obviously that's impossible if Black commits the rook to e8.

btw:
I think White playing Re1 at this stage is probably a small error. I'm sure s/he (we) should be getting on with it on the queenside.

Black is just fannying around, but that's appropriate--he's equal, very precisely equal, in the sense that the the position is just boring, I think.