You know how sometimes in a postmortem, it feels like your opponent and you were playing an entirely different game? You're busy pointing out how you couldn't exchange bishops on c4 (because the rook endgame was worse for you with an open b-file) whilst he's explaining how he was trying to mate you? It's like you're speaking an entirely different language: you say pawn-weakness, he mouths the mysterious words that appear to have no meaning to him, shakes his head, and starts talking again about where your king is. That kind of thing? 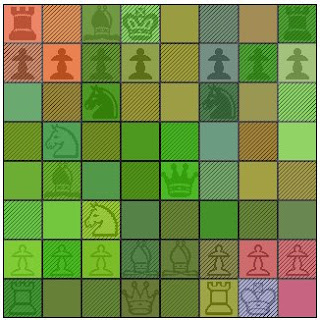 Well, judging from his recent blog post, Tom Brown sees chess in a way so different to me it seems not only a different game, not only a different language, but a thing entirely alien - and all the more fascinating for it. He has created a frenetic animation of a chess game that includes "colored fields to highlight the relevant ranges and the changing relationships of the pieces as they move about the board...

"Take a look at the changing colors and wonder how many relationships are established by moving the pieces about and also wonder at how the relationships change as pieces continue to develop...as they work with and against each other...here and there...near and far," he writes, going on to ask: "Now, where is your relevant range in life? and what color do you give off??"

Some questions have no answers, we can but mouth their mysterious words.

It is no new secret of course that chess is a grand, vast game that welcomes on to its boards all kinds of players with all kinds of thinking from all kinds of backgrounds - and the internet is the perfect vehicle for meeting more of them. On which note, allow me to introduce to you WuChess, a new website set up by RZA, a rapper best known for being the "de facto leader of the [famous American] hip hop group Wu-Tang Clan". WuChess is currently registering members before launching properly - and according to its blog numbers over 3,000 already. I'm one of them, and looking forward to playing new opponents there. How about you?
Posted by Tom Chivers at 12:34 am

the internet is the perfect vehicle for meeting more of them

Thought I better sign up also as I have a Wu-Tang Clan album.
Andrew

Thanks for the write-up! I will bookmark your blog.