In the end, it was one missed win too many. 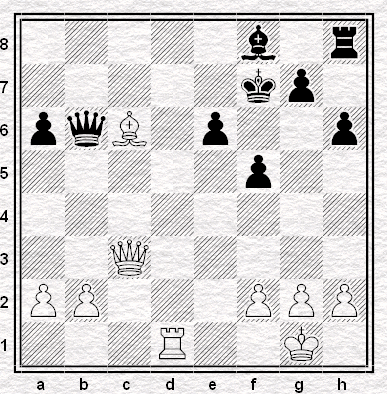 It was the last day of the season, and everthing came down to this game and this position.

We had lost quickly on board four and we were losing on board two, but board three looked to be winning a bishop ending (which was, indeed, eventually won) so I needed to win this position to draw the match - and win it on tie-break.

All season I had created won positions and failed to win them: I had, I was sure, created another one. My opponent had played the weak 9...a6 in the opening and after that the story was all about an exposed Black king and an undeveloped kingside. I had played for the diagram position absolutely convinced that I would be winning, just looking for the final touch.

However, when I got there, despite having plenty of time (I'm not sure how much - I was sufficiently distracted, or distressed, at the end to pick up my opponent's scoresheet instead of mine, on which times are recorded) I couldn't see it.

I spent most of my remaining time trying to find something, failed, eventually played 32.Qc4 anyway and was surprised by 32...Qxb2! 33.Qxe6+ Qf6! which saves the game. I played on for almost thirty more futile moves but there was nothing doing and eventually I had to shake hands and accept relegation.

I looked at the game a little that evening and a little more the next morning: but it was only when I put it through the computer that I understood that much of the above is based on a disastrous misapprehension. Can you see the the simple tactical point which I had missed, and which, if I had seen it, would have meant I won the game, squared the match and kept Casino Jaque in the top division?

It is the most soul-destroying pattern there can be: always to be winning, and always not to see the win that is there. I am shattered.

Agony. Commiserations to both you and the team.

Not that it will be any consolation, but before Joe S left his comment I had looked at 32.Rb7 Qc5 for several minutes trying to make 33.Be8+ work, without once thinking about 33.Rxg7+.

Yeah, that's what it's all about.

The thing was, I'd seen that the f8 bishop couldn't move, but I hadn't translated that into realising that it couldn't protect anything either.

I'm sure this is all very instructive on one level.