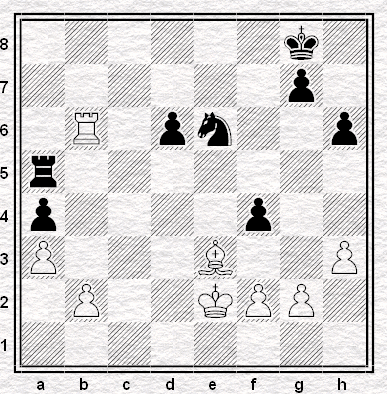 In those days there was a two-stage Olympiad, rather than a long Swiss: teams were divided up into Preliminary Groups and according to their final positions were be placed in an appropriate final group. Two teams qualified from each group to the top section in the second stage - and while the easy and predictable winners of the group were Yugoslavia, England started well and looked likely challengers for the second spot: particularly with weak sides Andorra and Luxembourg to come in the final two rounds. However, in the seventh round they lost badly to Canada and really needed maximum scores against the back-markers in the eighth and ninth.

This shouldn't have been so hard against Andorra, but on top board Penrose was faced with Olaf Ulvestad, a Norwegian emigré. White is surely better in the diagram position, with bishop against knight and Black's pawns vulnerable to attack, but Penrose wrongly thought he saw a way to win the d-pawn immediately with 47.Rxd6??. Presumably he'd just assumed the immediate capture 47...fxe3 which puts White a pawn up after 48.Rxe6, but in fact it loses to 47...Re5 which is the move Ulvestad played. 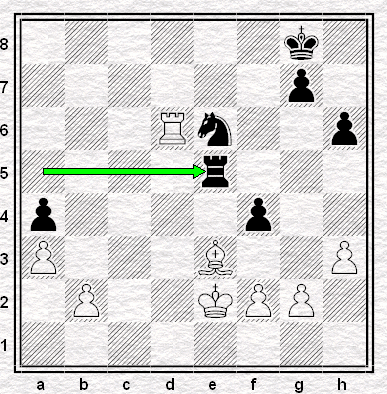 There followed 48.Ra6, a doomed attempt to get two connected passed pawns for the piece he'd lost, which was met by 48...Re4, denying Penrose even that small chance, since if 49.Kd3 fxe3 50.fxe3 Nc5+. Thus the game reached the following position: 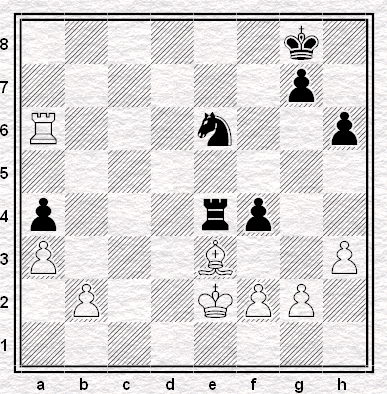 Ray Keene (modestly underplaying his own role in the drama) takes up the story:

At the Siegen Olympiad England was (sic) in the same Prelim section as Yugoslavia and Andorra. We were heading for the B Group, i.e. coming third, when disaster struck in the game Penrose-Ulvestad from (the) England v Andorra match.

Penrose had been winning but had a mental blackout during the game and made a weak move. He turned to me and said he had probably lost a piece and then - suddenly - in mid game he fainted and fell to the floor. I grabbed him - I am quite big, he is tiny - dragged him to a chair and positioned him there bolt upright. I was puzzled that his face appeared to be turning dark green to black.

Recognising that first aid was at the outer limits of my competence I decided to use what skills I did possess and called out in loud German - for Siegen is in Germany -"gibts vielleicht ein Arzt hier oder jemand der First Aid versteht?"

At this moment a polite young man leapt out of the audience and said - "Vat your are doingk eez keeling heem!" I asked why and he said that by making him sit upright I was draining the blood from his head: indeed, Penrose had now turned an alarming shade of black. The German continued, "ve must lay him down on ze floor zen he vil be ok ja!"

So we picked him up from the chair and put him flat on the ground, at which point colour returned to his face and he eventually recovered. The game with Ulvestad was discontinued and resigned. Penrose went home and England ended up in - and won - the C group, our worst ever Olympiad result until Calvia.

Still, nobody actually chinned anybody.

In truth Ray's memory is slightly at fault since Penrose's disaster cost England their chance at the A group rather than the B group, which only disappeared when Andrew Whiteley lost to Weber of Luxembourg in the last round. I don't know, from the crosstable, whether a draw would have been enough: either way, Black won easily from the following position to render the question academic. 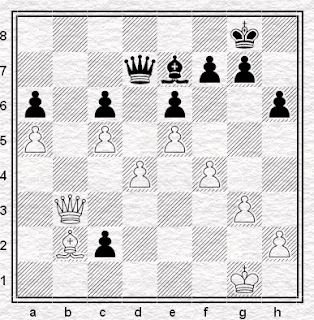 Subsequently Penrose turned to correspondence chess (although he did play the Olympiad again, in Nice in 1974). Ulvestad remains best-known for his variation (4.Ng5 d5 exd5 b5!?) in the Two Knights' Game. And Ray Keene - whatever happened to him?

Playthrough: Penrose-Ulvestad
Posted by ejh at 8:40 am

"ve must lay him down on ze floor zen he vil be ok ja!"

This German first aider ... had he previously appeared as a German officer in some war film or other? The Great Escape perhaps.

The Penrose link records that:

"At the Leipzig Olympiad in 1960, he defeated new world champion Mikhail Tal with the white pieces in a Modern Benoni:

I wonder when the next one was? (Miles?) In fact, I wonder how many there are in total!

Nosher beat Kasparov once in their WC match.

If we include ex WCs then we can add Keene beating Botvinnik and probably several other victories over Soviet ex WCs by Brit GMs and others?

Mickey Adams beat Kramnik at Corus 2004 so that makes five in total.

Olaf Ulvestad was not a Norgwegian emigre, he was American, of Scandanavian heritage, born in the Pacific Northwest, USA. Bob Hunt

Ulvestad left Washington state to live in Andorra in the mid-1960's, which explains why he was representing them in the Olympiad. He eventually returned to the United States.