When one side always wins

I’ve played 20-odd games with 1. Nf3 so far this season and haven’t done too badly with it at all. I’ve won eight, drawn seven and lost five. That’s an overall percentage of 58% which is “above average” according to my Chess Base dossier since you ask.

Not bad wouldn't you say? NO – it’s total crap. I think I should be doing much better.

I’ve come to this conclusion after examining the results of the games in Nigel Davies’ The Dynamic Reti. Of the 65 complete games analysed White scores +55 =9 -1. That’s over 91% which rather exposes my shameful lack of success with the opening.

You may be interested to know the only player of the White pieces to lose a game in Davies’ book is a certain Mr. Plachetka who went down against Kestler at the Nice Olympiad in 1974. In fact, even in this game White was better throughout before making a rash 29th move that lost his advantage then blundering the game away entirely on move 32. 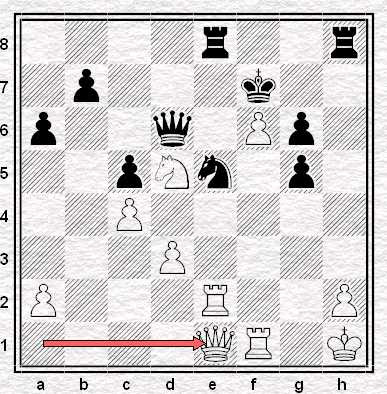 Black to play and force resignation

Why books with such an imbalance of scores get published? Is it because, as it appears to be, that chess book authors and publishers have an incredibly low opinion of their customer base? Their thought processes seem to run something like as follows:-

Not everybody takes this attitude of course. Consider Peter Wells' introduction to his book Chess Explained: The Queen's Indian, (Gambit, 2006):

"In general the selection of games has also been determined by considerations of strategic clarity and, I hope, entertainment. What was largely ignored was the result. Accidents happen even at a high level, and the reader is advised to use his own judgement in conjunction with the commentary rather than the less rigorous method of checking the result!"


If only all authors of chess books were like Peter Wells and actually interested in producing a quality product. Alas they are not and one of the things that follows from this basic starting point is that they churn out chess books that only contain games where one side wins. I do wish they’d stop. It’s embarrassing and it demeans us all … author, publisher and reader alike.


TIDLACB I
the omission of important lines
- Nigel Davies: The Dynamic Reti, Everyman 2004

TIDLACB II
[comment removed to keep Nigel Davies cheerful. Actually he hadn't asked us to do this (or threatened us with legal action if we didn't) but, hey, we want him to be happy so we did it anyway]
- Nigel Davies: The Dynamic Reti, Everyman 2004

There's a lot to be said for only looking at games where the side you want to follow wins. Otherwise you won't remember which plans for your side were good and which were bad.
So leave Nigel alone!

My guess is that well over half of all new chess books are on the opening but surely only a fraction of our games(especially at club level) are really decided in this phase of the game.
Why then do we all find these books so attractive ?
Joe S

Peter Wells is a quality author. He writes very interesting, thought-provoking stuff and is very principled- he won't churn out any poor quality marketing-led chess stuff just for $$'s. It's a shame that his chessbase magazine articles haven't been made into a book as they were (expect still are) excellent. I don't want to buy CBM just for that though.
Andrew

How can you remember which plans were bad, if all you are presented with apparently works?
Andrew

Joe - indeed. In my results spreadsheet last year and the season before I had a column called "When was the game decided?" From all my losses over those two years, only one has the word "Opening" ascribed to it in that column although there were also four games I won in the opening. This is from 70+ games.

Peter Wells is a quality author.

Yes, he is: there's an integrity to the way he writes which is missing in a fair number of other writers.

So Mr/Mrs/Ms Anonymous you feel that it's inevitable that the side you want to follow must have adopted the right plan if they won and presumably, therefore, must have chosen the wrong plan if they lost?

I actually prefer to look at games where "my" side wins when learning openings for two reasons:
1) it is more fun.
2) Somebody has to mess up for a decisive, non-draw outcome and I'd rather learn ways to exploit typical mistakes of the other side.

Of course, the second reason is fundamentally flawed, because it does not help me to see what kind of weak moves typically ruin "my" side's position. But then, back to no. 1 ;-)

And yes, openings are most probably not that important for most of us (except may be GMs), but studying them gives the illusion of being in control. Furthermore, it is easier to "impress" other chess players by saying "I play the killer-blabla variation" than to discuss some complicated endgame. To me, the popularity of opening books reflects humankind's desire for quick & cheap fixes, I guess that is why I just bought one myself...

Of course there's a natural tendency to see that "your" side lost and decide "well, I'd better play something else". Indeed to some degree this is rational - if a given line is taking a pasting, perhaps there is something badly wrong with it. But in most circumstances game will be both won and lost in large numbers in any given variation (except perhaps this one) and if you don't find out from the books what you're likely to be up against, you'll find out the hard way.

Wells's way of selecting games could have led to a selection where one side always won, and may do so in the future, who knows!

Books about openings also talk about plans for the middlegame, so it's not just about winning or losing in the opening. A more basic approach would be Michael de la Maza's from 'Rapid Chess Improvement' in which he suggests learning openings one move at a time, and then if you lose in the opening go back to the book and choose an alternative move for next time, although 'de la Maza isn't a particularly strong player.

Thing is, there may very likely not be a next time, not with exactly the same sequence of moves - and besides, what if there is? What's to stop you goping wrong on the move after?

All openings possess certain very sharp lines which sooner or later you need to know, but other than that it's not really a question of knowing exact lines. It's being aware of the ideas for each side in the position - in a way, not knowing the moves so much as having a good idea what to do when you don't know the moves any more. And that's not really quite the same as "plans" - there's not usually a simple scheme you can stick to.

It seems to me that there are several things you want from an openings book:

1. Some idea of general plans for both sides. I think the books which deal with the basic pawn structures that arise are best at this (e.g. McDonald & Harley's "Mastering the French") - why aren't there more books like this (perhaps the approach only suits closed openings).

2. A basic repertoire (with some alternatives, but not all the lines). Good examples of this type of book are Watson's "Play the French" and Kosten's book on the English.

3. "The Complete Whatever" type book. Good for looking up after a game, but I find these books impossible to get through.

4. Books based around complete games. Useful when you don't have a type 1 book to try and work out the plans, I find. Bizarrely I am also working my way through Davies's book on the Reti (I wonder if I should tell Jim Plaskett) and it seems fairly average for this type of book, in my opinion.

Incidentally, in support of the "play through winning games in your favoured opening" approach, I was getting routinely clobbered on the black side of the QGD several years ago. I had no database then and couldn't gain any insight from the dozen or so relevant books I owned so I played through 10 games which Capablanca* won on the black side of the QGD and it did the trick!

*Mike*
"... Davies's book on the Reti ... seems fairly average for this type of book, in my opinion.

I wouldn't necessarily disagree with what you say - although I'd suggest that's an indictment of chess books in general rather than a defence of Davies.

"... in support of the "play through winning games in your favoured opening" approach"

I don't object to this approach per se. Indeed, I also think it's worth playing through games when the opponent plays badly and gets smashed - that way you get to see what you're aiming for.

What I don't like is when this is ONLY what you get. This is probelmatic because games can get left out no matter how instructive the opening because the wrong side wins. Similarly, games can end up getting included regardless of how little value they actually have, just because the right side gets the full point. If you follow the link in the post to TIDLACB II you'll find Davies analysing Smyslov-Hausman. Aside from anything else there's really not much point including this game in the book because it's almost entirely irrelevant from a theoretical point of view. But then if you just pick games based on (a) famous player of the White pieces plays the b2-b4 system against the KID and (b) he wins the game then who cares?