Is chess a sport? That's a question I've wavered on indefinitely all my life, but an incident last Thursday night after my London League game at Cavendish Chess Club has definitively swayed me to one answer, and one answer only. My opponent that fateful night was Stewart Reuben, and after our exciting draw, during our postmortem, I suddenly realised that I was unable to extract my left earplug. This has never happened to me before, and although I normally put them in quite a way, they have never seemed dangerously deep. Probably what happened was that the way I had been chewing gum had coaxed the thing further into my auditory canal than usual, to a point that fingers could no longer grasp, I supposed as he pointed out various moves that I had missed. 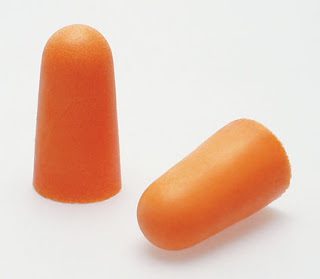 Afterward I tried this and that on the way to the tube - pinching at it with my fingers, holding my nose and blowing, hoping the pressure would force it back up - but to no avail, and in the end I decided to go to A&E at UCL in Gower Street, where I arrived at 10.45pm to find a crowded waiting room. At 11.30pm a nurse in a blank sort of mood saw me, and said I would have to join the queue to see the Doctor who would try to take it out with tweezers. And if that didn't work, suction. I asked her if she might try herself there and then, but apparently not.

Two hours later another nurse saw me - Gary who stank of cigarettes and who looked like he'd started to withdraw from nicotine the moment he last stopped chaining - and he took it out in about a minute, and then got a Dr who looked about twelve years old to check my ears. Said Dr looked at the ear-inspecting-device (later, I found out, called an Otoscope) like he'd never seen one before, and possibly he hadn't. He looked in my left ear, manoeuvering the thing this way and that, issuing sighs like a child confused in junior school at his first trigonometry lesson. Finally it struck him to look into my right ear to check how an undamaged ear should actually look, and he swapped the Otoscope back and forth comparing them, concluding that no damage had in fact been done on the left, on the basis of symmetry. 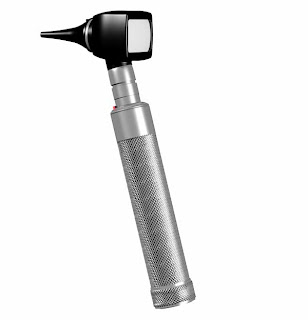 It was 1.30am then, or so, and I jogged the mile or so across town from Euston to Holborn to just catch a night bus, getting back around 2.30am to the flat and a wide-awake and instantly-relieved Sarah (my girlfriend) who'd got my message explaining I'd be late and why ... a voicemail that nonetheless failed to save her from a long, worried wait. Still - aside from my survivial with hearing intact - the silver lining from her point of view is yet another arrow in her quiver of arguments in favour of me getting myself a mobile phone (I phoned from the hospital reception) but, I digress.

Of course it was a shame that the first blank nurse couldn't have just plucked the thing out there and then. When the second nurse did so two or so hours later, nurse number one actually popped her head in as he held the tweezers in hand (longing for them to be a cigarette, no doubt) and stated in a blank, indifferent sort of way, that she was surprised to learn the earplug was still visible, i.e. reachable by tweezers and not in need of suction, and hadn't fallen further in due to my long wait. Caused, of course, by the fact she wasn't willing to take it out herself two hours earlier.

Still, given how busy and in some cases unpleasant the waiting room was, it is not hard to understand why they don't make cheerful individual decisions, why they have a system they 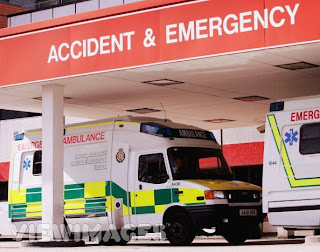 stick to, why I didn't get rushed through, why they all looked rather frazzled. (Except for the twelve year old Dr, who looked extremely excited - a shiny device there, the inside of an ear here! - as if he was off seeing brand new things on a school day trip. Perhaps he was.)

Drunks, you're probably thinking, and indeed there were three drunks, each unpleasant in their own way. One plonked in a wheelchair in the centre of the room, snoring away, eventually wetting himself massively without noticing. Another came in, cornered a confused family and their distressed daughter (younger even than the Dr; ten years old maybe) whom he started lecturing incoherently on the dangers of smoking. Finally one had obviously fallen down or been in a minor fight, but his injuries didn't amount to much... yet he refused to leave the waiting room and go away after having been seen, despite repeated requests to do so. "Give me ten minutes, wankers... I need to get my stuff from over there, wankers..." Two security guards eventually did a good job of manhandling him out of the building.

Of the many other unfortunates that night, the one I felt worst for was a guy who came in about an hour after I'd been there. Mid-twenties, effete, quietly spoken, a few cuts around his face, shaking a little, I heard him tell reception how he'd been beaten up by somebody he knew - but he didn't want to go into more details about that, he really didn't, except that the person had repeatedly stamped on his ribs and he was struggling to breathe as a result... Despite trying to hold himself together mentally and physically, despite trembling on the edge of tears, despite the wincing and the wheezing, there he was, determined to protect the person who did this to him. Pretty tragic and upsetting to witness, of course a million times worse for him. Still, they rushed him through, and I didn't resent my wait (as I mentioned before) but nonetheless, I digress.

And so, in conclusion, my experience has at last convinced me that chess is a highly physical sport, replete with the potential for injury that proves it.

Thanks to Martin Smith for the title of this post. For another late night after-the-games adventure, see this post too.
Posted by Tom Chivers at 11:37 am

Yes yes yes ... but what I really want to know is, Was Stewart Reuben using one of those electronic devices to record his moves or did he make do with pen and paper like everybody else?


PS:
I had Doogie Hooser M.D. as a doctor recently too. He called me 40. I told him I was in fact 39 and if I got anymore of his lip I'd be phoning his mother to tell her he wasn't in school.

Tom - congratulations on not having a mobile phone - you and me aginst the world! Have you abandoned ChessWorld? Paul G

Howdy *Paul*! No, I've not abandonned chessworld I've just had zero time to play on the site - very busy at work work, moved in with girlfriend, laptop broke and out of action for several months... I'll be back though. I have a computer at home now. I should see if a social is coming up... I think I'll be having a curry soon with Tryfon too.

*Jonathan* no, Stewart recorded his move in the usual way. This 39/40 thing has come up before I seem to recall. Rather unamusing I think you find it!

There's a social on 19th April, but I don't think I'll be able to make it, though there's another one in the summer. Work work - sounds even worse than work!

Tom - congratulations on not having a mobile phone - you and me aginst the world!

Angus French as well, I think...

You, me and Angus French against the world!

Don't worry Tom about sticking things in yourself to prove chess is a sport. I once lost a paper clip up my nose whilst deep in thought about a move and forgetting I was holding it. Shefield Royal Hospital put it in their museum to prove how stupid some patients are. I never thought of that excuse though. Doctor, I am trying to prove chess is a sport so I shoved this paper clip up my nose.
Cheers.
David Bentley

I was hoping a mobile phone was going to go off at King's Head today to give me something to write about tomorrow - They had promised to default anybody who's phone rings.