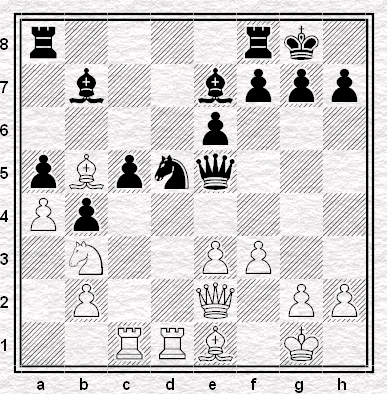 IM Sergio Garza v Justin Horton, Aragón Team Championship 2008, position after White's 20.Bd2-e1. Black's nineteenth captured a pawn on e5 and White had overlooked that after 20.Nxc5 Bxc5 21.Rxc5 his b2 pawn would be hanging. But now, of course, the e3 pawn is hanging.

Question 1. What happens after:

(The game and some comments will appear tomorrow. Quite likely there will also be remarks in the comments box today. You may take it that at least one wrong choice was made by the author and that his quest to beat an International Master remains unfulfilled.)
Posted by ejh at 9:10 am

2a (the queen/la dama): I don't think so but I shall check with the computer this afternoon / creo que no, pero lo comprobaré con el ordenadeur por la tarde....

(Javier observes that 23...Bd5! would win a pawn for Black - he only looked at it for two minutes without a board, and didn't check it on the computer. It seems, he says, that I had the advantage. Indeed I did.)