A bishop for a king 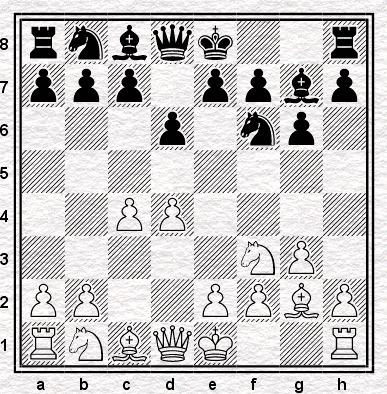 I played it first just over ten years ago now, the game transposing from the English. I'd become sceptical of the worth of the systems - against a KID set up - that books on flank openings recommended. Mostly I would try an English set-up with g3 and d3, expecting that my results would improve with practice, which they did not. Occasionally I improvised some nonsense with g3, c4 and b4. Finally I found myself coming to the reluctant conclusion that, just as the Reti anti-Slav systems really aren't as good for White as playing against the Slav, so the Reti anti-King's Indian systems probably aren't as good as playing against the actual King's Indian. Which I had always been afraid of, and which I knew nothing about.

But as it turned out, I was move-ordered into the Fianchetto Variation, in a club game in November 1998, against a strong player who (game below) played 7...d6 where everybody else had previously taken on d4. Not fancying the c5 exchange and early queen swap I pushed the d-pawn, anticipated an early debacle and - somewhat to my surprise - walked away a convincing winner (or anyway, a winner) at the end of the evening.

I gave the Reti option one more go, a few months later. (In fact I won the game, but I often prefer to abandon a distrusted variation after winning my last game with it - it's a bit like Holden trying to get a proper goodbye from Pencey.) Then I played the Fianchetto Variation again. I won that one too. And the one after. In fact I won the first seven games I played with it.

Such things do happen. (When living in Newcastle some years ago - in fact, not long after I started playing the Fianchetto Variation - I started watching Hartlepool, who promptly won the first seven games in which I watched them. This would have been less remarkable had they not been second from bottom in the league at the point when I began.) Still, while they happen, they do not happen very often and I doubt there's a chessplayer in the world who wouldn't feel attached to an new opening with which they won their first seven games.

The eighth, by the way, was a draw. I was on my fourteenth before I lost one. And my score, in the unlikely event that I've counted it properly, from OTB games from 1998 until last Saturday, is as follows:

Indeed, even if you take my results after the initial thirteen-game unbeaten run was ended, I still score 62.5% which is more than enough to be getting on with. (I've not included any lightning games I've played with it, since [a] I don't have the scores of these games and [b] I don't play lightning any more, but I can't resist mentioning that while I've never beaten an IM at normal time limits, I did use the Fianchetto Variation to beat an IM at a 2000 five-minute tournament in York.)

What's so great about it? I don't really know. And if I'm to be honest, in a number of these games I've been worse, sometimes much worse, in the middlegame, but recovered to win or draw. But I speculate that most KID players like to play the big-pawn-chain game, which they don't really get in the Fianchetto Variation. Normally both sides commit themselves and it's whoever has the most nerve and experience that prevails. But the Fianchetto Variation isn't like that, it's much more non-committal and Black is perhaps less clear as to what plan to follow. I don't know. All I know is, it seems to work.

So why doesn't everybody play it? Of course at GM level it's a different story and there are variations which are thought theoretically stronger for White, and these involve playing an early e4. But there is a little secret, which I'll let you into here. It's not for Black to play 7...cxd4 8.Nxd4 in the game below, giving us this position: 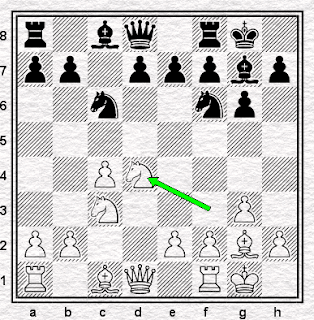 .
That's an old variation of the Symmetrical English and one not only a little better for White but not too dissimilar in style to the Fianchetto Variation anyway. I do really well from that position too. 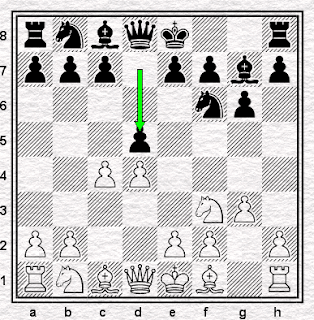 I've found over the past couple of years that more and more players are choosing this option - maybe it's been recommended in a book, maybe the word's got around, whatever. (It's been the almost inevitable choice of email opponents, as it happens.)

After ...d5 Black can try a solid, play-to-draw option with ...c6 or can take on c4 with ...c5 to come, opening everything up for the g7-bishop. So White may take on d5 immediately (which I do) but provided Black knows to play ...Nb6 before touching the other knight, life seems to me to be, in contrast with the KID, no easier for White than Black. 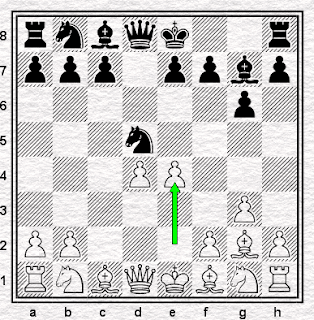 which is a lot harder for Black to defend (though of course it's perfectly possible to do so). However, to play that line I have to leave my knight on g1 - which is inconvenient for somebody who likes to play 1.Nf3 or 1.d4 and 2.Nf3, avoiding Budapests and Benkos. Still, perhaps now everybody is discovering the secret, I shall have no option.

As it stands, the Fianchetto Variation is still my pride and joy, my opening of openings. Seventy-four per cent, it's scored me. Barely worth Black turning up. I wish I'd discovered it ten years before I did. But then again, I wish that of a lot of things.

Interesting. Re the Grundfeld, is there a reason not to play 3.Nc3 and then go down the mainline Grunfeld? Or does black just delay moving his d-pawn until you play Nf3, so it doesn't matter?

Yeah, I don't want to play the mainline Grunfeld...

My experience over just the last two years (having taken up early g3 and Bg2 systems on his advice) is almost entirely identical to that of EJH.

I've yet to lose with the system. I did get beat once by George Salimibini but then he must be at least 50 ECF points stronger than me and in any event he played the Grunfeld set-up and not a KID.

On the plus side I've drawn with a 182ECF - the highest rated player who's failed to beat me - and am now almost certain (so far) to beat juniors and those graded below me.

Certainly a much smaller sample of games but I'm equally happy with the results.

g3 against the KID is now one of my most successful openings.

Previously I'd played set-ups based on an early b2-b4. This was suggested in Davies' Reti book and Dunnington's. It was my least successful opening - white or black - by far.

btw:
my feeling is that Black players who play the KID mostly want to play the big pawn chain variations and just hack away on the kingside.

That strategy doesn't really work against a fiachettoed king position.

I don't know why you're worried about people taking on c4 and playing ...c5. It opens up the diagonal for the g2 bishop as well! In fact since white still has his pawn on d4, even more so!

It's not exactly terminal, no, but in pratice I've found it hard to get anywhere against.

Incidentally Richard do you have any idea who that IM might have been?

I remember you telling me about the record with this opening just before your first loss- ok it was to Hebden! Shame as you would have come joint first ahead of 3 GMs if you'd won.
Andrew

I lost horribly a few years ago to a weaker player who went fianchetto against my rusty KID: got impatient, made some positional errors, prematurely sacked the exchange and it was all just a bit miserable from there on in.

Lol. Is it a total coincidence that I play the KID and played in a 5-min tournament on a rest day at York a few years ago? ;)