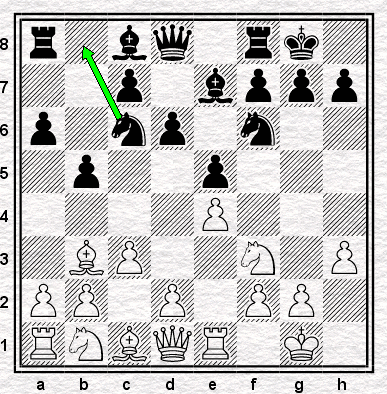 I say it suits me, though looking it up on Chessbase Online Database I find myself scoring only one win and one draw from the seven games on that database (which are not, of course, the only games I've played). I've employed it against at least five players with a variety of master titles and to my mind I've equalised in every game - whether that opinion is more or less important than the fact that I went on to lose every one of those games (even this one) I'll leave it up to you to judge. But I think it suits me, by which I probably mean I like it.

I like it, of course, because of the smart-alec element, moving the knight back to the square from which it started. Everybody likes to tell a joke and never mind that they heard it somewhere else before. Everybody likes to play a move with wit, even if the wit is copied from somebody else. But I also like it because it's logical, moving the knight to d7, where along with the pawn on d6 and the rook which will come to e8, it piles up on the strongpoint at e5. I read Nimzowitsch as a boy - and if nobody else in the world believes in overprotection, the idea still, presumably, has an effect on me.

I also like it because I've always taken a childish pleasure in playing games in which the largest possible number of moves are played before a capture - there's an example below* where the board is full until White's 26th. When I first started playing tournaments - the Hitchin Open, in the late Seventies - I would, after my game in the junior section had finished, go round looking at all the games in the Premier, to see which one had up to then played the fewest moves and which one had had the fewest captures. I saw nothing odd in this behaviour although I suspect, now, that a child psychologist would have a note or two to make about it. Well, our quirks and odditities remain even when we become aware of them, and sometimes I think I like to have the fullest board in the room.

Besides, the strong players don't like it. I've seen good players screw up their faces when they've realised they're going to have to play against the Breyer: they may have the White pieces against a club player but there'll be no twenty-move win for them today. Steve Waugh always said, do what the other side don't want you to do. That makes sense to me. The masters might have gone on to win in the end - but they didn't like it much. So I do.

From an over-protection standpoint, isn't 9...Nd7 even more logical - ?

Not really sure of the grounds for calling it an example of overprotection at all...(unless you're simply comparing it with the alternative 9...Na5)

Because everything's serving to protect e5?

Yes, but the re-routing of the Knight from a square which defends e5, to another square with defends e5, is somewhat irrelevant to that, no?

Not disputing that black ultimately might end up overprotecting e5, but it's hardly the primary point of the Breyer.