A couple of weeks ago I played for the other club in what resulted in the kind of mismatch you wouldn't have thought possible in a league chess match. I'm pretty sure that our bottom board would have beaten their top board with ease and had Other Club C stayed at home and Other Club D travelled instead I'm fairly sure we would still have won without dropping a point.

Total whitewashes are pretty rare in themselves but it wasn't so much the fact that we won 6-0 that stands out for me, it was more the manner of our victory. Our captain won inside fifteen minutes - the resignation was by no means premature given that he was already a queen and rook up - and when I delivered mate an hour and a half or so later there was only one game remaining. The home team's top board was battling on gamely a rook and several pawns down but eventually threw in the towel when he was faced with either mate or losing his other rook.

It was not too surprising to discover after the match had ended that none of their guys had much experience playing chess under tournament condiditions. Our team was made up only with middling club players, and I was on board three rather than my usual four or five, but it was very much bows and arrows against lightning nevertheless. This sort of thing is never that much fun for anybody of course but the home side seemed to enjoy playing serious chess and we had the unexpected bonus of an early start to our journey home.

My own game, I have to say, was a rather unusual experience.

By the time we were notching up our first point I'd got my pieces into this formation. 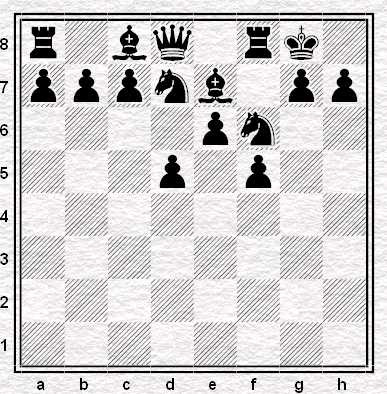 and hereabouts Morecambe and Wise's famous routine with Andre Previn floated into my mind. White's play reminded me very much of Eric's attempt to become a concert pianist. Individually the notes were fine but as a whole they lacked harmony and they sounded (or looked in this case) somewhat odd.

which brought us to this position 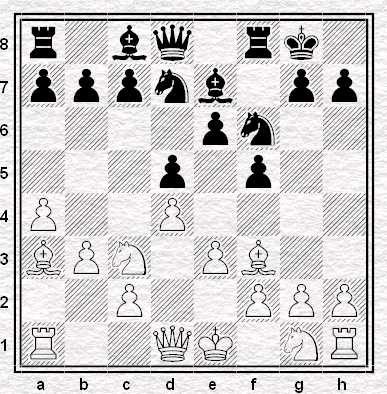 At this point it occurred to me that considering his inexperience White was actually playing pretty well indeed. He'd brought his bishop to the h1-a8 diagonal putting pressure on my centre and preventing me from placing my own bishop on b7; he'd delayed the development of his king's knight thus retaining the option of putting pressure on my weak e6 point with Ng1-h3-f4 and now he was forcing the exchange of my dark squared bishop leaving me with weak squares in the centre.

Despite their unconventional appearance my opponent was playing all the right moves - though not necessarily in the right order.

Perhaps his pawn on h1 may have provided a clue that he was not conversant with all the subtleties of the game as yet.

I'm not sure what you mean about the pawn but your comment did inspire me to take another look at the post and I noticed there was a mistake in the second diagram (B should have been on f3 not e2) - now corrected.

Thanks for pointing out the original mistake.

Black is much better here. He can play either c5, or c6 followed by e5. Also stick a N on e4. Whites pieces are on silly squares.

Yes I agree - although White's play is closer to being sensible than might appear at first sight.