To trick or not to trick

Here's a nice little trick - if you think it's worth your while. 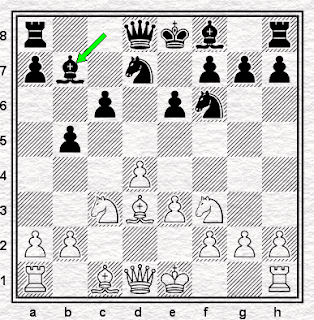 8...Bb7 (which Steffen Pedersen calls the Wade Variation) is probably the main move, though Anand played the riskier 8...a6 against Kramnik and other top players sometimes prefer it. (8...Bd6 and 8...b4 are also playable though much less often seen.) 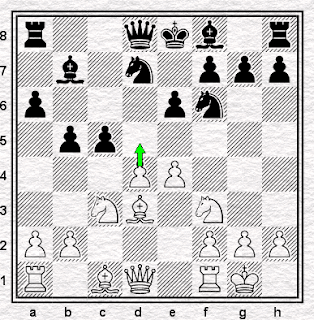 and now because 11.e5 isn't going to work after 11...cxd4 12.exf6 dxc3 White normally plays 11.d5, known as the Reynolds Variation, in which many grandmaster games have been played and which is currently seen as all right for Black. (Provided that is, a number of pitfalls are avoided, starting by not capturing on d5, which error was committed against me one weekend in the 4NCL.)

All right, but what if we play 9.e4 instead of castling? This is the trick. If Black, knowing that the idea is to move the bishop first and then the a-pawn (and possibly not knowing much more theory than that) plays naively 9...a6 then White has 10.e5! 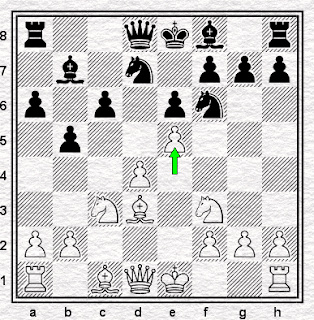 Now Black is suddenly in huge trouble. If this is not immediately apparent, the point is that after the natural 10...Nd5 and the subsequent exchange on d5 Black either doesn't have the freeing ...c5 any more, because after 11...cxd5 there's no c-pawn, or, after 11....exd5, is going to lose very quickly to something involving e6 with the Black king trapped in the centre. Pedersen calls the position after 11...cxd5 "very good for White" while Vera (Gambit, 2007) calls it "clearly unfavourable for Black". Black gets a dead bishop: White gets a big space advantage and an attack on the king.

So why is 9.e4 more rare than 9.O-O? Largely because if Black knows what they're doing (or thinks about it instead of playing the automatic move) there is 9...b4! 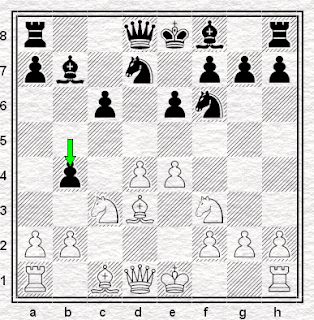 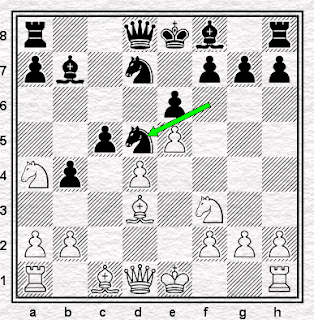 This position is no disaster for White - many fine attacking games have been won from here - but we can see that Black has successfully got in both Nd5 and c5, the moves he wanted to play. In general it's not so testing as the line with 9.O-O and for that reason is less popular with grandmasters. (Come to that, the whole 5.e3 line may be less testing than 5.Bg5, though that's a very complicated story.)

However, my experience has been as follows. I've tried the trick 9.e4 four times (I think) all against players rated a little lower than I. Every time, they've followed up with 9...a6?, allowing me to play 10.e5. Now as it happens I've not won all these games - I actually think I may only have won one of them - but nevertheless, a plus-over-minus position is not to be sniffed at after fewer than a dozen moves if somebody's going to hand it to you. The problem with it is - in order to try the trick, you have to play the second-best line. If they know what they're doing, you've deliberately put yourself in an inferior line. But on the other hand, everybody does seem to fall for it.

Is it playing for tricks or playing the man and not the board (as Simon Webb, for example, advised)?

I play one variation which is basically tricksy, ie, if black goes down the mainline I believe he comes out with at least the better practical chances (albeit at the cost of a pawn.) Having said that I've not actually lost in this line, although I'm not sure I've ever won in it either; however, I do intend to replace it when I get the changes (eg 15 years from now.)

What's "get the changes"? Is that a contemporary expression?

Typo! I meant 'get the chance'.

As Sarah emailed to me the other day, "I feel like I haven't spelt in a week."

Perhaps we should start using the expression and become linguistic pioneers?

Yeah. Let's get the changes!

Nice post! I love reading about these kinds of mini-traps.

The only tricky line I use these days is the Nge2/Ng3/Be2/h4 King's Indian, which can find Black being overwhelmed pretty fast if he doesn't pay attention.

The icing on the cake is the dis-information that goes with the trick. Your next opponent will prepare for 9.e4 instead of 9.O-O.

The drawback is that when you do eventually play 9.O-O, against a stronger opponent presumably, you have less experience of it because you have been playing 9.e4.

Your next opponent will prepare for 9.e4 instead of 9.O-O.

Blog readers would of course suspect that you might in fact castle. It's the eye-witness effect that you shouldn't discount.

Here in the USA weekend swisses, the players frequently scan the other boards looking for openings to book up on. (Or in the case of GMs and IMs, they are deciding whether to open with 1.e4 or 1.d4.) It's always helpful to play a second-string variation in an early round, when you can usually afford it against a weaker opponent. Then you bring out the better line in the later round against the stronger opponent.

Unless of course the tournament has gone all wrong, in which case you stoop to the third-rate opening, for entertainment value. I once defended the Steinitz Scotch in such a situation, a wild draw, still totally unclear in the endgame but we were both exhausted. The hard part was keeping a straight face afterwards telling the other players that it really is playable. You never want to miss an opportunity to lead some Lopez player astray in the Scotch ...