It is not often that I can say that I've trumped my friend and fellow blogger EJH's chess achievements but last Tuesday I managed to win with the black pieces. I can't claim I wasn't very fortunate, to be precise I can't claim I wasn't dead lost for long periods during the middle game, but nevertheless I ended up mating him with Queen and King against King in the blitz finish and victory was mine.

The game began with 1. c4 but pretty soon transposed into a Classical Dutch - which should please recent visitor to our comments box Psycho Cowboy. 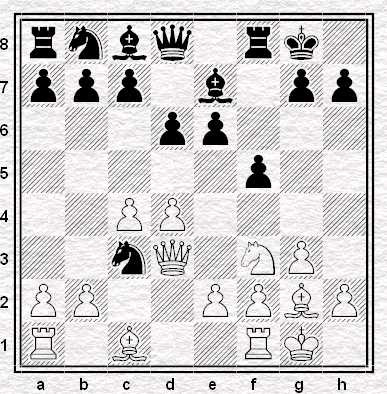 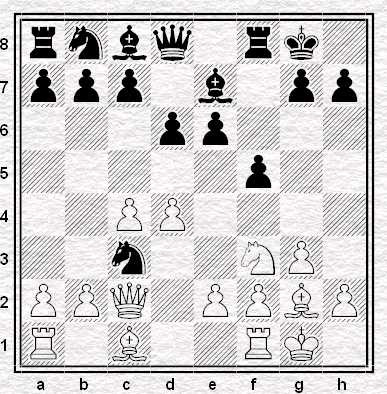 ... in the past twelve months.

My opponents were spread across the whole spectrum of playing strength (130s, 110s, 170s respectively) but curiously they all responded with bxc3. Well it's curious to me because I'm pretty sure that I'd prefer keeping the pawns in order with Qxc3 here.

I'm no expert on these lines but I very much doubt that there are any grounds to say one move is objectively better than another. It seems to me that the choice here is entirely a matter of taste and personal style.

So, valued readers of the S&BCC blog, I'm interested to know whether you would prefer to recapture with the pawn or the queen and why? In short, would you prefer this ... 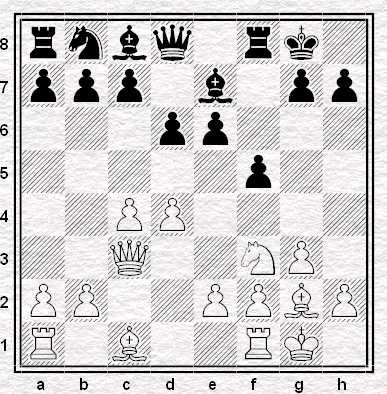 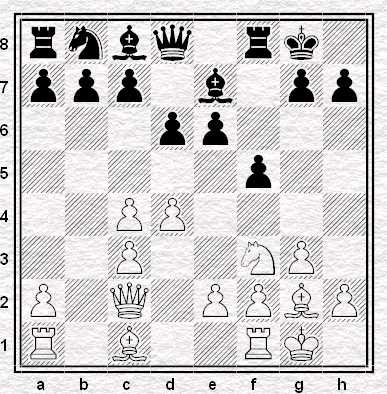 All answers gratefully received.
Posted by Jonathan B at 8:33 am

OK. I'd take with the queen, both on principle and because I know a little of the theory, but I suspect that people are taking with the pawn because they think Black is going to play ...Bf6 and ...c5.

Which Black may well do, putting White's queen and rook are in the firing line of the bishop - but in fact, White can handle it. This may not be clear, though, to somebody new to the position. (In fact, White can play 9...Bf6 10.b3 - and I have a feeling, can even try 10.b4, though I'm not sure I'd have the nerve.)

Either Stauton or Morphy once took in a very similar position with the pawn, but through modern eyes that's obviously not the done thing.

A quick note before I head out to the Bielski ...

I rather suspect that with the Queen on d3 (rather than c2) it IS objectively better to take with the monarch rather than the lowly pawn.

With the Queen on c2 though ... EJH you seem to be saying current theory suggests that even then Qxc3 is objectively the right choice. Well I'll take your word for that - although bxc3 must be highly playable too. Shirov played it, for example.

Perhaps then you wouldn't fancy a transpo to the French???

well you may have convinced me last night that the Staunton Gambit Deferred is not completely terrible but I still can't quite believe it's as good as the Staunton itself.

I found a secondhand copy of NIC Yearbook 78 in the Baker Street Chess & Bridge shop today.

As a reformed Dutch player myself, I consider bxc3 a mistake. That said, the white position can stand the worsening, and the position remains difficult for both players. It all comes down to piece activity, like in some theoretical Nimzo or English positions where white takes bad pawns but still fights for the advantage. Shirov is a genius, he can get away with a bad move once in a while.

As for the theory, I no longer have Bellin's old book on the Classical Dutch, but I do have Pinski's 2002 book by the same title.

So Pinski does not actually question bxc3, but his Qxc3 lines all lead to +=, and his bxc3 lines do not. Based on that it should be bxc3?!.