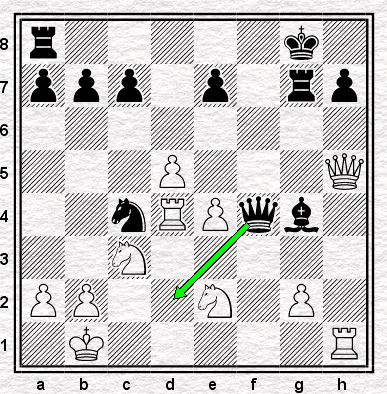 21...Qd2!! 0-1
Following the Mamedyarov-Kurnosov "cheating" controversy - in so far as there was anything to follow, in the absence of anything that resembled evidence - I found myself having some sympathy for poor old Shakhriyar Mamedyarov, who seems to have made a bit of a fool of himself.

It's very easy, in the current climate, to get suspicious of an opponent. Moreover I can imagine how it must play havoc with a grandmaster's mind, to try and play one's best against an opponent when one's ability to think and concentrate is being overwhelmed, not only by the feeling that one is being cheated, but the certainty that, as a result, today's efforts will be futile. And once your head's been got at, you've next to no chance anyway: and whatever you do next isn't likely to be all that rational.

Still, why sympathise with a man who seems on this occasion to have got it badly wrong? Perhaps because everybody needs a friend when they get it wrong, and perhaps because everybody gets it wrong sometimes. I remember getting it wrong myself. Not over-the-board - the level at which I play is yet to face that particular agony to any degree, although our time will surely come - but in email seven years ago, in a competition where computer use was not permitted and where (as far as I could tell, from previous games I had played) they normally were not used.

Not dissimilarly to Mamedyarov's situation, I was on the White side of a theoretically-approved line - and within the space of a few moves found myself in a lost position after a couple of surprising tactical blows culminating with a queen going from one en prise square to another.

The game went as follows: 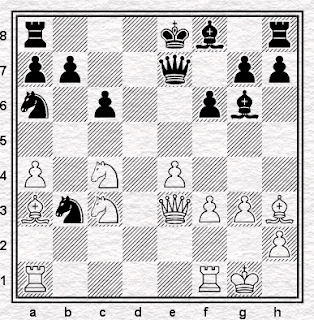 after which, although a little uneasy after Black's last few unexpected moves, I remained confident: I expected the Black queen to move and then to have a breakthrough in the centre, presumably with e5.

In retrospect, that was the beauty of pre-computer correspondence chess: despite all that thinking time, despite being able to move the pieces, you could still think you were winning and yet find yourself immediately lost the next move you received. Because when I next received a move it was the highly surprising 16...Qc5!! 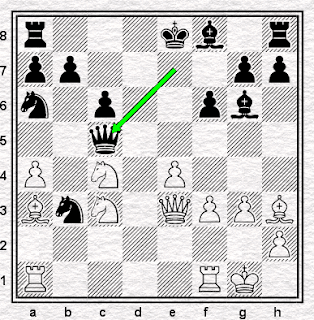 which brought about my resignation without further play. Perhaps a little prematurely, but I'd attribute it to shock as much as to the realisation that I was a pawn down for nothing.

Shock and more than shock. Because I didn't believe it. Players at that level surely don't play moves like that: computers do. People don't expose the queen to attack and then play it part-way down the very diagonal along which they are being attacked. Ordinary players don't always play ordinary moves. Sometimes they play good moves, sometimes they even make sacrifices and sometimes they even sacrifice the queen. But even in email chess, they don't usually play like that. I sent a complaint straight off to the controller and consulted with my friends who had computers (I, at the time, did not) to ask whether they thought it suspicious. The controller told me there was no evidence and no case to answer. I wasn't at all pleased with their reply and said so. And, in saying so, indeed in having said anything at all, I reckon I made a fool of myself.

Because looking at it again years later - with a computer - I can't see what I was complaining about. Yes, of course, the last move is a belter - though it possibly didn't need to be seen in advance, before 15...Nxb3, as I had thought, given that 16...Qf7 also seems to survive. So it's not at all hard to see, not now, how Black might, say, have had one move planned but had a last look round for something else and found this wonderful alternative.

Maybe they didn't even have anything good planned. Maybe they'd just meant to put the b3 knight back on c5, which leaves White with enormous, winning compensation for the pawn - but until the last minute they hadn't realised they could do better, they hadn't realised they were actually close to winning. This hadn't even occurred to me until now, until I looked at the game again to write today's piece. I was so sure that I'd been done, so sure that I'd been turned over, that I'd assumed Black had had it under control all the time. But suppose he hadn't? Suppose he'd thought he was close to losing and that only a bad mistake by White could get him out of it?

In fact, if he'd used a computer it's most unlikely he'd have got into the position that he did, because the computer would have told him how bad it was! Rybka, for instance, rates White's position as 1.00 or better from before move ten (and while I know that this was seven years ago and things have moved on, I doubt it would have been enormously different then). Indeed, it's only at my plausible but disastrous fifteenth move that the tables were turned. 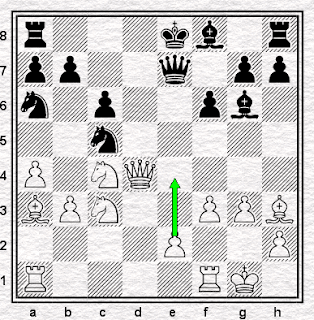 I thought 15.e4?? would allow me to break though to Black's king while protecting the queen from an exchange - but it turned out that I didn't have time for either and didn't need to find it. Rybka assures me that 15.Rad1! (not the only move, as it goes) would suffice after which Black tries - and he has nothing better - to exchange off some heavy pieces with 15...Rd8 it comes to grief after 16.Qxd8+ Qxd8 17.Rxd8+ Kxd8 18.Rd1+ Ke6 19.b4 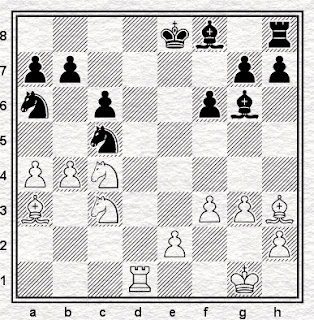 and now after the knight moves the rook will come to d7 and it'll soon be over. Which isn't obvious from half-a-dozen moves back - but even won positions aren't always obviously won. Chess isn't supposed to be obvious.

Still, it's mostly obvious to me that I got it wrong in 2002 as it seems pretty obvious that Shakhriyar Mamedyarov got it wrong in 2009. Both of us rushed to judgement: whereas had I taken my time and thought about it, as I so often do not after a chess game, I might have reflected that there was more evidence that a computer had not been used than there was evidence than it had.

Stil. Maybe he did use a computer. Maybe he didn't use one until the last minute because by that stage he thought he was lost without one. Maybe I can't know that for sure either. We can none of us know it for sure any more. I suspect, in fact, that the real damage done to chess by computer-cheating will be that: the mental damage, the destruction of trust. And perhaps the loss of joy in beautiful moves: because we replace the reaction how did you think of that? with its opposite, who thought of it for you?

My two pence worth; if Qd6 was a novelty then if this was a prepared novelty then Kurnosov would have surely analysed it. I also suspect he used Rybka to do so in a great deal of depth to ensure that it work and some of that analysis would have to stick for it to be worthwhile. If he can rattle out 15-20 moves of theory then I fail to see why he could rattle out 10 moves of analysis.

Well quite (assuming you mean "could not"). I don't doubt a computer was used - but some time before the game, I suspect.

It's quite possible that the whole line had been played in a private training game or analysed with the help of a chess engine.

Those that would attempt to detect cheating by comparing moves to a portfolio of chess engines are to my mind potentially creating false accusations. Some points :-

Chess Engines, Rybka in particular, are becoming increasingly good at emulating grandmaster positional assessments, so the computer's first choice would match the GM's.

Players who train with chess engines can get better at anticipating the machine's ideas. This also increases the match-up rate.

The concept of "out of book" isn't well defined. The position in question had been played up to move 16 (not move 12 as alleged by the white player). The moves beyond that may have been played in private or analysed beforehand.

Perhaps in the future, players will be searched for chess playing devices before matches..or does this happen already? Or maybe one day people will have chess computers wired up to their brains. We could all become super GMs overnight.

Much like black cab drivers are somewhat redundant now Sat Nav has arrived...

Hmm, destruction of trust. Personally, I don't feel the possibility of computer cheating has or will worsen OTB chess. Most players are not cheaters in this premeditated way, in fact they are more with me than against me on this issue.

What we need is a simple plan for dealing with a suspected cheat, because Mamedyarov clearly panicked in the flames and failed to get out of the building unharmed.

Suspicious behavior (getting up after every move and taking your jacket qualifies, matching Rybka's moves does not) is not going to convict anyone. What it will do is lead eventually to the cheater, if such, being caught in the act.

The problem is that nobody wants to make a false accusation, but as they say, "Il faut faire un choix." I think it should be considered correct to report suspicious behavior as such, *without* a requirement of proof. The TD can note it and then go see for themselves, but take no further action until warranted by something concrete. With the weight of enough such reports, a search would be justified.

The alternate outcome is that the TD will already be well aware of the situation and can explain to the player why the suspicious behavior is not to be worried about.