Confused? You will be

Try and follow this carefully, because I shall only write it once.

There I was, reading my copy of Practical Endgame Tips by Edmar Mednis, pusblished by Cadogan in 1998. The first chapter is a bit of didactic entertaiment entitled Resigning Too Soon in which a selection of masters do precisely that: on page twenty-three a section starts called Causes of Unnecessary Resignation and it picks its way entertainingly though points numbered (1) to (6).

The time control had been reached and Black, dissatisfied with the slight advantage possible after 41...Bxh4+ 42.Ng3, went in for tactics:

[page 27 then ends and we find ourselves at the top of page 28, looking at a diagram. Confusingly, it is not numbered 30 - ejh] 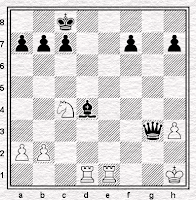 ...when the shocked and momentarily blinded German GM resigned! Neither Black nor White had noticed that after....

White saves the rook and wins the game with the pedestrian 43.Ke3.

[Hang on, you're saying - what six to where? There's no such piece! As it goes, I was saying the same thing. So we read on, hoping to find out what we've missed...]

(8) Indeed the position of Diagram 31, Veselovsky - L.P Psakhis, USSR 1980, is resignable for White. His king is caught in a back-rank mating net.

All that Black has to do is play the simple 1...Kc3, whereupon the game is over. Yet Black preferred a move with a double threat and chose:

Black threatens both 2...Ra1# and 2...Bxf4. Though surprised by the move, White looked no more and did the expected: he resigned! Yet, by being fancy instead of simple, Black had...

[and we move to the top of the double-column page, again, where the following diagram is placed:] 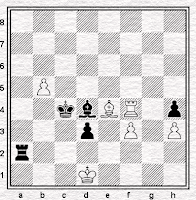 ...thrown away the win. White draws with the unexpected 2.Bh7+!

[OK, that one worked all right, even if the diagram was numbered wrong again. So we just swap the diagram numbers and get on with it, right? But no, because we still haven't got a R6xe2 anywhere. So the first diagram's still a mystery. Well, plough on...]

(9) White's need in Diagram 32, Kofman-Sachetti, Budapest 1947, is clear: he must prevent devastation after the threatened 1...Qxh3+. Since there is no 'obvious' way of doing that, White resigned! The correct approach would have been to rack his brain to see if there isn't something special in the position to offer hope. If White had looked hard enough, he would have noted that Black's king is poorly placed. Voilà, the answer is: 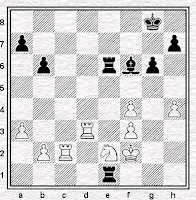 [in which no queen of any kind appears to be available to wreak devastation at h3 or anywhere else. The text continues, starting with a White move although the diagram is annotated B, meaning Black to play...]

White has a substantial material advantage and will win with care.

(10) Both sides are ready to win Diagram 33, Carlos Torre-NN, New York simultaneous 1924, White to move. If Black were not threatening mate starting with 1...Rc1+, White's passed pawns would be decisive. However, the famous Mexican - who was strong enough to defeat Emanuel Lasker in Moscow International 1925 - saw no way to cope with BlacK's threat and resigned! Of course, playing the simul was a distraction yet if Torre had concentrated harder on the 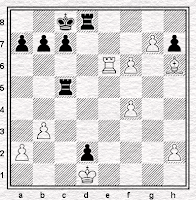 value of his passed pawns, the correct move would have come to him easily enough:

And as that one seems perfectly all right (save for the strange numbering of the diagram) I can get myself out of that constricting small type, relax, sit back and ask - did you follow all that?

I don't suppose you did (even if you were viewing it in the right browser and resolution, without which I imagine this posting is a jumble of nonsense). I mean I didn't, not at first and not for quite a while. Still, just in case there is anybody who can view this properly, who's waded through it all and who still gave a monkey's by the end of it, here's a short set of test questions.

Very amusing. Back in the days of rub-on transfer diagrams I can imagine the things falling on the floor and some poor non-chessplayer trying to figure out which went where. What boggles the mind is that in the electronic age it is still possible to publish game scores that don't play through. The database program will not allow that, but somehow the printed version still has errors. Has happened to me more than once.

Now a couple of questions for you: (1) Was the author really given as Edgar? (2) Why didn't you also point out the missing the white king in diagram "31"?

In K.Darga - L.Lengyel, isn't there a white King missing (or is that part of the fun?)

maybe it's taken up Vassily's idea and is off in the background, kissing the queen...

I recognize 33B as Darga - Lengyel from the 1964 Amsterdam Interzonal. On my WCC site I noted, 'The premature resignation may even have cost Darga a place in the subsequent playoff for the last spot in the Candidates matches.'

You can always look up the rest in a database. - Mark

Now a couple of questions for you

EJH is away and therefore not available to respond for at least a few days.

I was supposed to proof read this post and while I may not have been as conscientious as I should have been I assumed the absent king in the first diagram was missing in the original.

Error spotters - well done and thanks. Actually I should have known better to prepare a complex piece on the nmight before a two-day business trip away from the internet: normally I'd find and correct errors in the morning. So thanks for that: an ordinary chessplayer is right in both instances which have both been corrected (as has a third error which seani was kind enough to point out to me separately).

However, it does all serve to illustrate the point, which I've made on here before. errors of this sort are almost inevitable - whether you're publishing on the internet or in print. However, there is supposed in book publishing to be a checking process, called copy-editing, which - while there's no process which is infallible - should catch most of the errors, and all the most glaring ones. It's my informed suspicion that some chess publishers do not employ copy-editors (or, at very least, have not done so in the recent past). If Cadogan had one in 1998, what was he or she doing while checking page 27-9?