On Bob Dylan and chess

Tomorrow sees the release of Bob Dylan's 33rd studio album, Together Through Life. This is much more of a cause for celebration than it would have been, say, fifteen years ago - his last three albums have, thankfully, been spectacularly un-boring (and un-Christian). The omens are good, too: 'Beyond Here Lies Nothin'', Together Through Life's opener, is sexy and stellar, despite its fairly obvious similarities to Fleetwood Mac's 'Black Magic Woman'. One never really needs an excuse to write about Bob Dylan, of course, but given that this is the Streatham and Brixton Chess Blog there really ought to be some accent on chess. Instantly the question is begged: is Bob Dylan a chess player?

In so much as anyone who knows the rules of chess and who has pushed a few pawns around can be called a chess player, then the answer is yes. Indeed, there is photographic evidence: 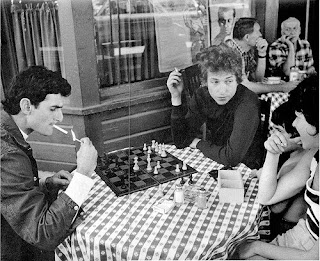 The above, to which we shall return soon, was one of many photographs of Dylan in Woodstock taken by Daniel Kramer in 1964 and 1965. On the left is Dylan's roadie Victor Maimudes. But as we all know only too well, being a chess player, and describing oneself as such, is far, far less about playing and more about that intangible state, both overwhelmingly joyous and depressing, whereby the game begins to dominate your waking thoughts, your bookshelf, your life. What interests me is that in the early-to-mid 1960s chess continues to crop up as a minor motif in Dylan's work. On the Minnesota Hotel Tapes (recorded 22 December 1961, before the release of his eponymous debut album), for example, he tells the following story about his travels and travails in East Orange County:

Note the tone and pace of Dylan's speech, all rather suggestive of someone heavily under the influence of Woody Guthrie. Note, too, the accompanying photo taken from the same Kramer session. (For many years Hardinge Simpole have hosted a page containing a transcript of the Orange County tale - here again it is juxtaposed with yet another Kramer chess photo.)

In January 1964 Dylan released The Times They Are a-Changin'. We need not make too much of that album's famous protest song, 'Only a Pawn in their Game', besides noting the pleasing central use of some vague chess imagery. (Dylan later returned to pawns as metaphor on 'Caribbean Wind', an outtake from 1981's terrible Shot of Love: 'Could I have been used and played as a pawn? / It certainly was possible as the gay night wore on.') More interesting is Another Side of Bob Dylan, released later in 1964 and specifically its liner notes, which contain the following elevated prose:

"i could make you crawl
if i was payin' attention"
he said munchin' a sandwich
in between chess moves
"what d' you wanna make
me crawl for?"
"i mean i just could"
"could make me crawl"
"yeah, make you crawl!"
"humm, funny guy you are"
"no, i just play t' win,
that's all"
"well if you can't win me,
then you're the worst player
i ever played"
"what d' you mean?"
"i mean i lose all the time"
his jaw tightened an' he took
a deep breath
"hummm, now i gotta beat you"

It was in the same month that Another Side was put out that Daniel Kramer began his year-long photo shoot: chess was seemingly on Dylan's mind. This is further evidenced by his stream-of-consciousness novel Tarantula (released, finally, in 1971 but written in the years 1965-6), which also contained a few references to chess. Tarantula had its critics - viz. most people who read it - and certainly, it is not the most re-readable book in the world. But it is an eminently important text in and of itself by virtue of the fact that it illuminates, poetically, the inner workings of an artist at his creative peak. We should therefore be at least mildly curious at passages such as

in a hilarious grave of fruit hides the wee gunfighter warm bottle of roominghouse juice in the rim of his sheep skin/ lord thomas of the nightingales, bird of youth, rasputin the clod, galileo the regular guy & max, the novice chess player

Darling the Hypocrite immediately lights a fire to the floor & People Gringo pounds his fist on a book & says that rocking chair & watermelon are the same word only with different letters ...St. Bread from the riot squad-entering with his chess pieces & a hilarious hard on & he laughs too

MAMMOTH NOAH & the orient marauders all on the morality rap & Priest of Harmony in a narrow costume-he's with the angels now & he says "all's useless-useless" & Instinct, poet of the antique zenith-putting on his hoofs & whinnying "all's not useless-all is very signifying! " & the insane pied piper stealing the Queen's Pawn & the conquering war cry "neither-neither" & jails being cremated & jail in I fall' g & newly arrived spirits digging-digging their finger nails-their fingernails into each other...

...all of which suggests that the Royal Game was a sort of stock ad-libbing port of call for the young Dylan. Did this interest in chess persist, however? A 2002 article in The Atlantic suggested as much, claiming that the singer was one of many to engage in a phone conversation (worth $2,500) with Bobby Fischer in the 1980s. But Fischer was Fischer, a celebrity in his own right with a titilating aura: I wouldn't mind speaking to OJ Simpson, but that doesn't mean I'm into American football or murder. Besides, Dylan's manager allegedly paid for it.

Improbably it was everyone's least favourite Irishman, Bono, who got to the heart of the matter. When Dylan came to play at Dublin Castle in 1984, the saviour of the world and part time U2 singer interviewed him for Hot Press magazine. Most definitely a chess player himself, Bono couldn't help but ask:


Bono: Chess, do you play chess?
Dylan: Yeah, I play chess. Are you a chess player?
Bono: I am a chess player.
Dylan: I'm not that good actually.
Bono: I'll challenge you to a game of chess.
Dylan: I don't have it right now actually, I just don't have one on me, but the next time you see me!
Bono: Oh, you can get these little ones you know, that you can carry around.
Dylan: Yeah, I take them on tour all the time, but nobody in the band will play me.
Bono: Really?
Dylan: Yeah, they say it's an ego trip. They say I want to win, I don't want to win, I just like to play.
Bono: When you put out a record that causes trouble - is it part of an overall plan, or do you just do it?
Dylan: No, I don't ever put out a record to cause trouble - if it causes trouble, it causes trouble, that's apart from me. If it causes trouble, that's other people's problem. It's not my problem. I'm just not going to put out a record that I just feel - you know, if I feel like I'm inspired to make a statement, I'll make that statement. But what happens after I do it, I don't care about that.
Bono: What's your opening game?
Dylan: My opening game, you mean king's pawn up two - and all that? I don't know.
Bono: You just takes it as it comes.
Dylan: Yeah. I don't really play that seriously.
Bono: Well, I thought I did until I played Adam's brother Sebastian - he was only about 13 years old and he beat me!
Dylan: Somebody may have a chess game here.
Bono: I'd love to play.

And then, just as they were on the search for a chess board, Van Morrison entered the room and spoilt everything. Isn't that always the way?

All we really know about Dylan and chess, then, is that he played a bit, admired Bobby Fischer, didn't know any opening theory and would often bash out drug-fuelled doggerel about the game. Sounds a lot like me. But we're not quite done: 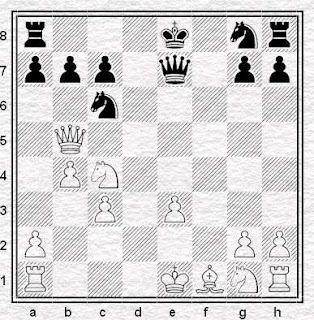 Dylan - Maimudes, Woodstock, 1965. White to play
Yegads! Looks like the insane pied piper's gone and stolen the Queen's Pawns again. So far as I'm aware this is the position on the board in the first Kramer photograph. Why white to play? It's not just that Dylan's evidently distracted by some interesting patter while his roadie is deep in thought. If we look at the photo which accompanied the Orange County yarn it appears that the same game is progress, only seven half-moves later: 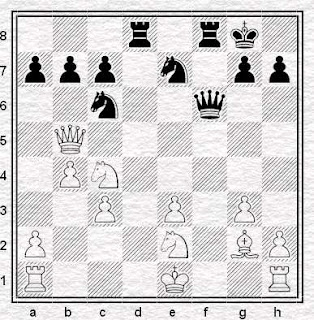 Clearly Bob Dylan was not the worst chess player in the world; perhaps his roadie was. Either way, it is refreshing to know that not all of my heroes (cf. Andre Breton, Frank Zappa) have feet of clay when it comes to chess.
Posted by Morgan Daniels at 10:46 am

most people who read itOr indeed tried to

I've noticed before how chess can be seen as very cool, and at other times very uncool and geeky. I suppose it depends on whose doing the playing.

I'd be curious to see some of Bono's games, maybe.

I was only 10 years old when I told him that I could make him crawl, and then went on to beat him in chess.

Victor taught me to play when I was eleven, in 1968. We were in mountains of New Mexico and he had nobody to play with. I don't remember beating him though.