The detective stubbed out his seventh consecutive Hamlet and reached for the bottle. It was late, very late, and he was getting nowhere.

'Well, Watson? What do you think?'

'I don't even know what I'm doing here' replied William, the English chess grandmaster. 'You've just been staring at a wall for six hours. And is Ron Passant really your name?'

There was a long pause. William, formerly a great hope for British chess but now a lawyer, was perfectly used to sitting in silence for forever and a day, but even he was getting impatient.

'There's no easy way to say this' said Ron finally. 'There's a serial killer on the loose - and he's picking off British club chess players that nobody has ever really heard of, one by one. Watson, I need your help.'

'Because there's a pattern to these murders. So far this guy's killed ten players - and he's going to kill again. He has an intricate knowledge of chess, and so I need a chess player to figure this one out.'

'Oh, I was just looking up grandmasters on Wikipedia and liked the way Spassky described you as being like a drunk with a machine gun. Reminded me of myself.'

Ron passed Watson the chessboard that had been found by the first victim three weeks ago. 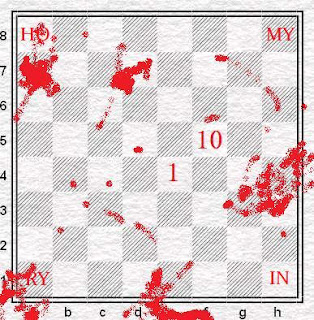 'Well, yes. We think there's some order to his madness. If we can decipher this odd code we might be able to figure out who he's going to kill next, and catch him in the act. Oh, and there was also this note...'

Watson stared long and hard at the board. 'Ah, but there is. If I know my British club chess like I think I do, there are only two people who could possibly fit the bill. And given our killer's propensity to murder players rated below 200 ECF, I think we can narrow it down to just one. Ron, we're going to Lichfield.'

'Oh god, that's a long way from New York. I really don't know why they put me on this case.'


Who is the serial killer's next intended victim?

It's well-known I prefer intuition over analysis, so I'll take a punt on Kier Eyles.

It's Ray Keene isn't it? Or Gerry Walsh?

Dunno but does anybody remember Raymondo being called in by the police - apparently - to investigate something or other.

So we went out for lunch today and frankly, I may quite possibly have had myself a sup of that delight called beer. Therefore I'm going to attempt this properly.

But it turns out, I have to go now.

Any chance of a clue or two here Morgan.

I'm impressed with T.C.'s work but can't take it any further.

RY (a1) and IN (h1) also correspond to the first and last letters of the surnames of victims Eddie Ridley & Tom Iveson; however, this doesn't seem to be the case for the other two corners which anyway don't match with any player from Lichfield. Therefore, it's Kier Eyles.

Yuri Slobodynk, perhaps? (being as he is not as good as Yang Shen)

Is this like mornington Crescent or something where there's a joke but I don't get it?

Anon is right - it's Yuri Slobodink.

TC is right about Z v A.

Looks like the whole grid is taken from a passage of text, possibly from a Sherlock Holmes story (I haven't checked yet but may do later), possibly starting from a8 where we have HO(LMES?). But as we're looking for a set of initials belonging to only two active players in the ECF list, one of whom plays for Lichfield and one of whom is over 200, that leads us, without needing to decipher the full code, to YS (the least usual set of initials belonging to a currently active Lichfield player) and Yuri Slobodink. A quick check on my copy of the Master List confirms Anon's two active YS players.

William Watson might have consulted his former class mate at St Paul's back in the 1970s, Richard Holmes.

(Your link on Andy Tipper actually led to Andy Tinker (RJCC many years ago) - there is no Andy Tipper in the list).

I told myself that I'd confirm the answer once two people got it right. So well done, Anonymous and RJ. Yuri Slobodynk, about whom I know absolutely nothing, is correct. Maybe somebody should get in contact with him. Oh, and thanks, too, for pointing out the Tipper gaffe, Richard.

I'm guessing young Anonymous has figured out the text which forms the code -- care to share your workings (and your name?)

Thanks for playing. I have a feeling this may not be the last chess-themed murder Ron has to tackle...

(There were only 60 Sherlock Holmes stories so it probably isn't that.)

To clarify: "young Anonymous" didn't suss the code - RJ has his "logic", such as it was, exactly right. Lichfield was the biggest clue.

Credit to TC for his beer-fuelled(?) contri pointing us in the right direction.

But more credit to MD for creating the puzzle! Very imaginative. Ron Passant II to come?

This had me stumped for a good while yesterday while stuck in the office pretending to work. Good "meta-reasoning" by RJ there.

As everyone else has done the heavy lifting, my own 2 cents:

- in my recollection, the only SH story to use a cipher with one-time pad given by a text was Chapter 1 of The Valley of Fear. Does that have any relevance to 128?

'To clarify: "young Anonymous" didn't suss the code - RJ has his "logic", such as it was, exactly right. Lichfield was the biggest clue.'

Yeah, I kinda regret putting the Lichfield bit in now. It does boil it down rather. As for the code: let's just say there's a clue in the first sentence. That's all you're getting.

'But more credit to MD for creating the puzzle! Very imaginative. Ron Passant II to come?'

Cheers! Makes it worthwhile. I'm certain Ron will have another chess related murder to solve in the coming weeks...

I guess there's some kind of Shakespeare theme going on ---- what with Hamlet in the first line, and later a deliberate avoidance of the quote from the same 'method in the madness', with 'order' used instead. Presumably as a clue to the fact that the order of the victims reflects the order of the moves?

Speaking as one of the victims of the murderer, if a victim of a murder can in fact speak, is the significance of the letters HO and MY in the top left and right hand corners a reference to MYcroft HOlmes, the great detectives smarter, older brother, who appeared in, I believe two stories: The Greek Interpreter and the Bruce-Partington Plans?

Incidentally I do not recall being murdered by this Yuri Slobodink, but then I have been murdered so many times it is hard to remember all the occasions.

Ooh, come on then Anonymous - which one are you? I was so hoping that one or two of the eleven chess players I'd decided to arbitrarily kill off would stumble across this blog. *Please* tell me who you are, oh please!

I was more worried some of the victims might start getting bumped off for real and the rozzers would come knocking ... if so I would like to make it clear in advance this post had absolutely nothing to do with me. All Morgan's doing. He's your man officer.

In answer to your question about my identity (your post of 7th April, 2.44), I am an ex work colleague of a Streatham member.