The Good, The Bad, The Ugly

If I could go back in time and stop civilization at a certain moment - stop all human ingenuity, invention and innovation that came after - I would do so at the moment that both the bath and the sofa had just been invented. And if I could do the same thing but only in the realm of chess computers, then I think the point of development captured in this lovely video (via Mark Weeks) -

- would probably be about right. 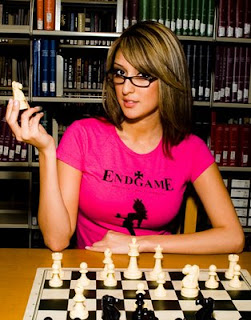 The Fritzes and Rybkas - those destroyers of dreams, those refuters of our fantasies, those merciless machines - no more.
Still, I suppose I must admit that the internet is quite good.
After all, according to Grandmaster Var Akobian it's responsible for "Without a doubt, the finest chess apparel [he's] ever seen," in the form of Endgame Clothing (via). An example is to the right.
Finest? Maybe, maybe not. If you don't agree with Var,
perhaps the more macho Chess Fight Gear (via) will prove more to your taste? 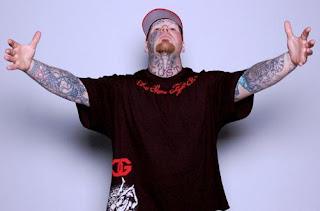 An example is to the left.
(And don't forget, previous t-shirt related posts can be found here and here.)
As to what out of these three I deem good, bad or ugly, I leave to the readers' imagination.
Posted by Tom Chivers at 10:01 am

That particular pink shirt got some press at http://lizzyknowsall.blogspot.com/2009/03/funny-t-shirt.html. I reconstruct the game as 1 e4 e5 2 Nc3 Nf6 3 d3 Nc6 4 Bg5 Be7 and now white, in the middle of Ng1-moves, is interrupted by black: "Oh, this would make a good picture for the catalog!" Can't see the clock, let's hope it is stopped ...

Endgame? She's not even out of the opening...

Oh, this is very exciting. I came across a photo of Bernstein and his chess computer in a book of general mathematics that I stole from my school library about seven years ago. The photo was credited to Andreas Feininger, but no further info was given. The following text accompanied it:

Computers seem to be taking over more and more human functions. They write music, compose poetry, evaulate stock portfoliios and even play the intellectual game of chess. Experts are now trying to make them even more like people by training them to respond to the human voice. One big obstacle is that sound patterns made by people's voices are as distinctive as their fingerprints: when the computer of the future "hears" a spoken word it will have to ignore those sounds peculiar to the voice, like volume and pitch, and retain only the "pure" phonetic pronunciation of the word. Fears are sometimes expressed that as computers act more like human beings "the machines will take over". But computer engineers are not concerned. Says one: "We can always pull the plug".

The picture is here: http://www.chessninja.com/images/chesscomp1972.jpg