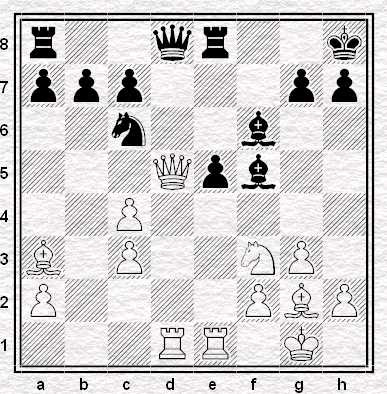 Once more unto the breach, dear friends.

I'm not sure exactly why this position, or more precisely this mistake, has become so fascinating to me. I certainly didn't intend to dedicate quite so many posts to it when I started out. Anyhoo, following on from the original post I've already looked at how I miscalculated a tactical line but perhaps only because I'd applied a faulty template and misapplied a perfectly good one to guide my thinking.

Today I want to move away from the litany of my shortcomings, as numerous as they may be, and look at the specific position in which I blundered. It was chess itself, you see, that led me astray. Well how humans tend to play chess anyway.

To explain what I mean I'll need to take another look at Jacob Aagaard's book Excelling at Chess. Specifically it's chapter 4 which addresses what the Overly Voweled One calls 'Unforcing Play' that concerns us. Here Aagaard suggests that we are inherently attracted to forcing sequences of moves when considering a chess position.

"We have a tendency to force play (as opposed to searching for good moves), and the less we feel the need to do so, the freer we are to address the matter of finding the best move."

At first sight this is a somewhat odd concept. What would be our motive for choosing a move that was not one which we considered in some sense to be the best one?

The reason we employ forcing moves is obvious - forcing variations gives us a sense of control, while less forcing play, in contrast, can leave us with a sense of floating in air and lacking control, which is not a naturally welcome feeling when anxious about the outcome of the game.

Our rational conscious minds, then, sometimes take a back seat allowing an unconscious process to take over. Our emotional need to feel in control trumps every thing else, however much that might lead to an outcome that is counterproductive in terms of our goal of winning the game. 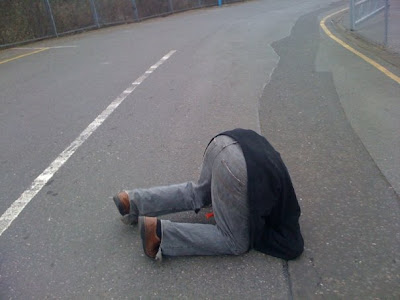 Applying Aagaard's concept to blunder ground zero, if we compare ... Qxd5 with ... Qc8 (see previous posts and comments) we can see the queen exchange is the much more forcing option.

After 1. ... Qxd5 I can be pretty sure White is going to respond 2. cxd5 and for that matter he's almost certainly going to follow my intended 2. ... Na5 with 3. Nd2 to stop my knight getting back into play. There's a huge chance, then, that the position I'm expecting to get at move three will actually appear on the board.

For 1. ... Qc8, however, things are very different. It's not at all obvious what White's next move is going to be let alone what might happen thereafter. I mentioned last time that I did not think about 1. ... Qc8 long enough to even consider what White's response might be. Aagaard's would perhaps see this as me steering myself away from an emotionally difficult option of not being sure what might happen in favour of a course of action that I could be pretty sure - or at least that I could believe - that I'd be able to chart with some accuracy.

Implicit in Aagaard's idea is the point that, leaving aside possibilities of miscalculation, there's a sense in which forcing moves are more likely to be mistakes than unforcing moves. Maintaining the tension is sometimes the best approach in a given position but we will nevertheless be tempted to force matters because we always are but there is no equivalent in reverse, i.e. when a forcing continuation is best but we'd be psychologically tempted to keep things steady.

Thus for Aagaard when mistakes happen our tendency to force matters, driven by our human need to feel in control, is disproportionately likely to be a factor.

The idea that we should be wary of forcing continuations is far from uncontroversial. It's also obviously the case, as Aagaard himself fully recognises, that you can't play chess without sometimes finding yourself in a position when it's the best thing to do. Nevertheless, when explaining chess mistakes, our at least explaining my mistakes, it seems to me that there's much of value to explore here and I feel very strongly that if I could learn when to avoid directing play down concrete lines it could well lead to a big improvement in my play. After all, isn't this line from Aagaard familiar to all of us?

"I have long had the feeling that Real chess players are less inclined to force variations, perhaps because they do not have the same insecurity as the rest of us, where we always fear (don't lie to me, I know you do it too) that we are about to mess up our position."

Yes, I often feel the impulse to move my pieces from good squares to ones where they make a tactical threat which can be easily countered, but it does leave me with that insecurity, that if I just leave the piece on the good square rather than making threats, that my position will become worse.

As I've observed in previous comments boxes, I'm suspicious of this whole line of thinking, and in general of the idea that we are going to identify certain position types in which we need - conveniently enough - to be avoiding tactical and forced approaches. I'm not denying that there's such a thing as using your loaf, nor that there's such a thing as thinking more efficiently and wisely (this of course being an aspect of using one's loaf) but at the very least, I think I'm entitled to wonder how it is that we're going to have the chess understanding to identify these sorts of positions if we don't have the chess understanding to calculate a two or three move sequence without serious error.

The point, or part of it, is that if that makes that sort calculation seem like an easy, trivial thing - oh can't you do even that - it's not. Really a very important part of chess thinking is "not throwing this game away in the next two moves". It's not easy at all. But it has far less to do with identifying position types than with having some awareness of alternatives and trying (I think this can be very difficult indeed) to look at a line a second time but considering alternatives to the moves you assumed the first time.

Now, that said, I do think that what Aagaard says is of interest, because I do think that most chessplayers, self included, have a very large tendency to try and force things, rather than asking the question - "how can I try and improve my position?". Apart from the reasons Aagaard gives, I'd suggest that people tend to overestimate small advantages when they have them (and for that matter they sometimes overestimate small disadvantages too, although that's less common). But in fact a forcing sequence will often dissipate our advantage rather than increase it, perhaps especially where it's an advantage of space - it's amazing for instance how many players who have d4 and e4 pawns against d6 and e5 pawns will rush to take on e5, because that is in some sense imposing their will on the game, and not realising that their edge, such as it is, pretty much lies in leaving that formation untouched.

I've occasionally tried to recommend that people might avoid this sort of thing by taking the following approach - treat all positions as being essentially in a state of equality unless and until the tactics show you otherwise. That way you may avoid getting carried away and may be more inclined to just look for better squares for your pieces, try to exchange off your opponent's good pieces and so on, rather than look for instant wins. I think it's quite a good idea and might help people acquire a necessarily discipline, but of course it has its drawbacks - notably that it may fall into the same category I've already criticised of being a convenient way to tell yourself you should avoid tactical involvement. (And the truth is that sooner or later, to win a game, you often do need to see and calculate a tactical line, as people don't always fall over.)

There's a few illustrative games from my personal experience I might write about on here in the future - at least if the game viewer ever starts working again (so for my own convenience I'll leave a note here that they're from a Cambridge congress long ago, my last 4NCL game before emigrating and a friend's game from the first round of the 2008 Aragón team championships). In all of them, the player spoiled their advantage by trying to force it rather than just try and put their pieces on better squares.

However, I nevertheless think this wasn't really what your position was about and that conceptually, there was nothing wrong with the idea of exchanging off your opponent's powerful queen. It really wasn't considering that idea that was a problem. It was miscalculating it, for one thing, and it wasn't considering either ideas, for a second.

(1) The fear that you are about to mess up your position is precisely what keeps you alert to your opponent's possibilities.

(2) To have the confidence to make non-forcing moves (maintain the tension, etc.), you need to be tactically stronger. Then you can calculate that on your opponent's next turn he won't be able to harm you. It seems like a paradox, until you realize there is no clear separation between tactical and positional play.

ejh: If all positions are essentially equal until tactics show otherwise, then there is nothing wrong with dxe5 in your example. Equal before and equal after, right? What you are doing sounds like an idiosyncratic trick, but I doubt its value for most players.

Equal before and equal after, right?Only, I think, if we interpret the idea more dogmatically than is intended (or suggested). It's not posited as an absolute truth: it's proposed as a useful self-discipline. It's not framed as "it doesn't really matter what you do, because you're going to be equal pretty much whatever". I'm sure it's possible to both praise God and keep one's powder dry.