The Chess in Art Postscript: Mirror Writing looked at Massimo Bontempelli's "The Chess Set in the Mirror" (first published in 1922 in Italian, but only translated into English in 2007) and Lewis Carroll's "Through the Looking Glass" (1872[1871]) which both have a mirror/chess theme, and which both are graced by bespoke illustrations.

Last time we focussed on the text, so now let's look at the two artists and their images: John Tenniel (1820-1914), Victorian gent. for TLG; and Sergio Tofano (1883-1973)(aka STO), Italian modiste for CSM. Their art was as different as their times, but with some surprising similarities.

Tenniel was a political cartoonist, and his illustrations were highly wrought. He was a picture maker, strong on characterisation, using allusion and reference to add weight. His images could really pack a Punch. 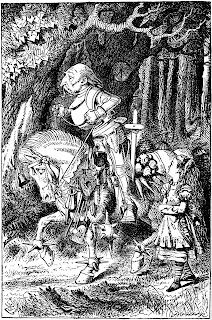 This is Tenniel's Alice meeting the White Knight. It is an illustration created for a context, but it could almost stand on its own (unlike the rather unsteady rider) as a comic art-work. What a picture as he readies himself to fall off again, concealing a self-deprecating in-joke: the incompetent chevalier is none other than John Tenniel himself. 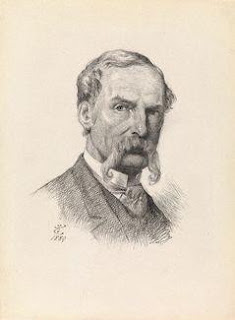 One commentator, Jenny Uglow (2008), says that Tenniel was content to let people think that the joker on horse-back was a lampoon of Carroll...as ever, nothing is quite what it seems in the looking glass.

JT could do scary, just look at the Jabberwocky (who/which has done sterling service from Salvator Rosa in the C17th, to Alien in the C20th) deemed to be too frightening for the frontispiece of TLG and so consigned to the bowels of the book. As a political cartoonist he could do character - if not assassination, then mugging - depicting the Mr Hyde lurking within the Dr Jekyll of a hapless victim. But could he do women, other that in mature matronly Red Queen mode? Don't his young ladies appear just a bit too much as Alice look-alikes (or vice-versa), as just so stereo as some of the other types he depicts? 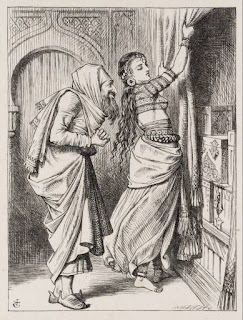 On this evidence it seems that he couldn't tell the ladies apart, couldn't capture their "specificity", however sharp his pencil.

Compare STO, a signor for the signore I'll be bound. He swam in different waters from JT: the theatre, haute couture, advertising. His line was elegant and spare, dashing with casual grace and facility across the page. 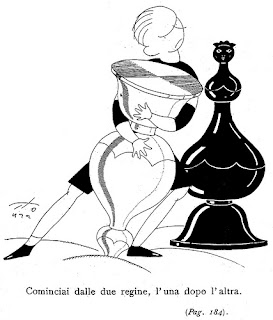 "I began with the two Queens, one after the other."

Here, in a few deft flourishes, he captures the determined efforts of the lad to wrestle a piece from a reversed opening. A wrestler with attitude? Maybe. But character? Not so sure. Width, but not depth. And there's a suspicion that, like Tenniel, his rendering of young people was a touch generalised. Each is one of an undifferentiated kind. Here Boy's visage could be that of any kid on the block, and none.

He also plays Tenniel-style jokes in his CSM illustrations, such as making his burglar, his carpenter, etc., a bit self-portrait-like. They are well-endowed nasally, something he wasn't too precious to send up in himself. Like Tenniel he hung his self-caricature on his most prominent feature.

He even followed his nose in his self-portrait photographs where, now in his element of image management, we might expect him to ham it up: 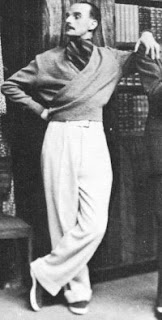 He dresses and poses like one of his cat-walk creatures, making a complete mannequin of himself. And speaking of mannequins, one appears in CSM to deliver this self-regarding observation "I am....the object upon which men and women attempt to model themselves, so that they too can appear to be [one]" (page 70). Reflect on that.

But he could also do serious, as in this stunning, economical, sly 1923 caricature of a well-known Italian politician: 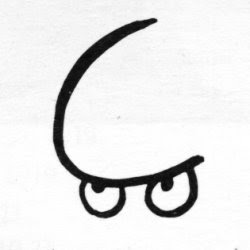 That's right, it's Mussolini (five marks only) just as he was grasping totalitarian power. STO exquisitely implies the weasel eyes and bull-necked, bully-boy head-case. Regrettably one doesn't know enough about STO's own political inclinations, if he had any, to say whether he was on the outside of Il Duce's entourage pissing in, or on the inside pissing out (let's hope the former).

In. Out. A pleasingly thematic mirror metaphor with which to end.

This post has wandered a bit far from its starting point, as both Alice and Boy did in their adventures. Try these books for the first time, or again, or on your young relations or aquaintances. In spite of their similarities they are a very different read. Compare, contrast and enjoy.

See Chess in Art Postscript: Mirror Writing for details of CSM and TLG.

This site has lots of detail on STO and his work, although it is in Italian.

Jenny Uglow's "Words and Pictures; Writers, Artists and a Peculiarly British Tradition" published in 2008 by Faber and Faber, London, has a section on Tenniel and Alice, and she refers to the Jabberwocky/Rosa connection. The Penguin centenary edition of TLG has very helpful "Note on Tenniel" by Hugh Haughton (1998).

Salvator Rosa's 1646 "Temptation of St. Anthony" is in the Museo de Villa Luca - Pinacotecca Rambaldi in Sanremo, Italy. Aliens can be found anywhere.

On a side note it's interesting to see Alien's granddaddy. Alien must be one of the greatest films of all time. It's amazing the special effects still stand up to scrutiny 30 years on, especially when you consider that it was made at the same time as Blake's 7