The Chess in Art Postscript: Two's Company looked at chess-in-art works that put a third party in the picture, which we continue to do in this post. But this time around the non-player takes an interest in the game, something they were too distracted, dismayed, or disinterested to do last time (except for a bit of rule bending in C16th Anon and Teneh-Tannenbaum, where they anticipated today's goings on).

In the piece below, from the same stable as Deutsch in Chess in Art XV, we can try and enter the Orientalist mind-set and spin a story for the scene. A walk-on extra pauses to sneak a look, his interest a bit more than passing. He knows the game, and can assess the position, but would refrain from suggesting a move - it would infringe the strict codes of this warrior caste. With so many scimitars at hand, and much dope taken, the consequences could be disproportionate to the misdemeanour; better therefore to bite one's lip lest a greater amount of blood be spilt.

This kind of reading (or perhaps something even more fanciful) of that kind of exotic concoction would have fascinated, titillated (the hareem springs naturally to the male mind) and scared the pants off the C19th chattering classes. Hermetic and unpredictable, in a culture both alluring and disturbing, those Arabian Johnnies seem to be playing chess, though not as the Victorians knew it, by Jingo.

So, what's their game?

Whichever; the point holds. In our own time, and our own sphere, it would be dead handy to be able to take a leaf from the Arabs' book and dispense summary justice to that particularly notorious offender against civilised etiquette: that odious bottom-feeder, the lowest form of chess life - the kibitzer; he who hangs around disposing unsolicited advice and self-aggrandising comment, always standing because not invited to sit; he who, unable to get a game of his own, messes officiously with other people's. Yes. Dead handy.

Kibitzing is a peculiarly, though not exclusively, chess phenomenon, and unless you are a serious player, frequently in the company of other chessers, it may be beyond your ken. Artists appear not to get it as there is no definitive depiction of a kibitzer feeding his wretched habit. It is painting waiting to happen, and though some head in the right direction.... ...they fall short, as above (a kibitzer, unlike this chap, lurks in a crowd, for audience and camouflage; here he confines his comment, politely and sotto voce, to a single friend, though the finger stab is a characteristic display - but see the note on Garinei at the end). No, I couldn't find a single painting that captures the downright bad manners, egoism and boorishness of the species. The nearest I could get was this: 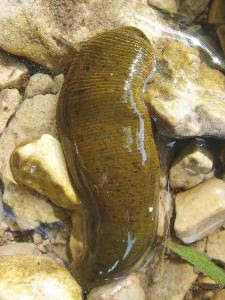 By contrast there are many chess-in-art works where the third party is a welcome guest sitting down as one with the players. Last time Teneh-Tannenbaum was an example. This time we can go even further and witness a minor miracle: 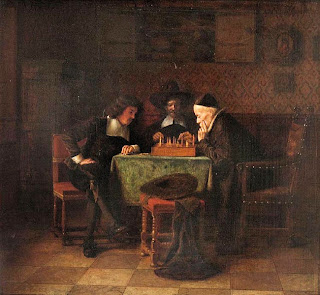 In this community of kindred chess spirits a fusion, a socio-nuclear reaction, takes place in which the third party appears to become a third player and you can't tell who is making the move. Like Harry Lime, he has come in from the cold; deep third man is called in to silly mid-off; the third person singular conjugates to the first person plural. Thus, adding extra characters helps brew the visual spell and, if required, deliver a sleight of compositional hand. They enable the viewer to vicariously empathise with the chess action on the board, enhanced by the social by-play around it.

So sorry then to spoil the party. As we noted in Two's Company, too many artists adopt a formulaic, hackneyed, pictorial arrangement: the two players are put stolidly broadside on, invariably leaning forward, and make a space wherein the extras find their allotted place. See all three examples above. Alas, that's all three (almost; see again the note on Garinei below).

To show again that a more dramatic disposition is possible, as did Kirchner last time, have a look at this: 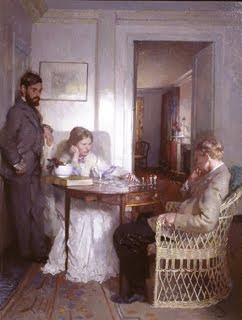 Compared with K's Expressionist strip-show this in an understated, and overdressed, gem; but just as dynamic for all that: a subtle rotation; a backward slump; a casual pose as the onlooker co-operates to frame the lady; a long view into the salon beyond where a chair echoes its counterpart in the foreground; the vases of blooms playing catch-me with the red pieces. All parties look at the board, and with eyes at maximum compositional range, their concentration fills the room with a psychic force. The door is open to let in a little air.

They say that the seated figure maybe the artist himself, aged 24. He has the red hair for it, though in the light of Orpen's commitment to Irish cultural nationalism, green would have been more emblematic. His career combined a line of nice little earners in Society portraiture, a series of astonishing, and not just for their frankness, nudes (shown as people, not meat), and First World War battlefield reportage revealing it as, and for what, it was: butchery.

He rounds things off nicely, showing again that more than two can make for congenial company and fine pictures at the chess board, so long as no-one distracts the players, though these Two's Company posts have revealed an unintended consequence, for me at least, along the way. They have stimulated observations on more than the formalities of composition, subject matter or style. They say something about the assumptions that may also get painted into a picture: dominant cultural givens applied by the artist's brush straight onto canvas, without engaging his (sic) brain. As well as artistic "isms" such as "Expressionism", "Impressionism" and so on, there may be others at work: "Racism", "Imperialism", "Sexism", and a few more besides.

Gérôme is in the Wallace Collection, London, as mentioned above, and they call it "The Draughts Players" dated 1859. The Tableaux Échecs site has the picture, but with the date 1898, and the title "Arnauds jouant aux échecs". Marek calls it "Jouers d'échecs", sourcing it to, yes, the Wallace Collection (he gets the date right).

Garinei seems a bit obscure, with little information on the web; the picture also comes from Tableaux Échecs. As luck would have it in the afternoon before posting I turned up a Christmas card I had been sent several years ago with the same Garinei image on the front - and on the back there is a thumbnail of the complete picture showing a fifth, much younger, man seated behind and to the right of the gent with the fez! The T. É. image (as in the blog above) is therefore cropped (whether wittingly or not). Dammit! Still, one more callow youth does not an audience make, so he remains a kibitzer manqué; but in the light of the Xmas card revelation Garinei can hardly be deemed a compositional hack. The card was published by Woodmansterne.

The exquisitely composed, and appropriately slimey, leech image is by Chris Schuster in Encyclopedia.com.

Buchbinder is in a private collection; picture also from T. É.

Orpen is in the Ashmolean. Thanks to Tom Chivers for bringing it to my attention.

Thanks to Jonathan B. for commenting last time that racism is a chess-in-art theme that deserves more investigation.

About that game of yours from last week Martin - you really should have taken on c4 much earlier you know. Of course if you were familiar with Arbuthnott - Nostraland (Rigby of course not Lupin) British Championships 1923 you'd know that. I remember leafing through Arbuthnott's monograph on the subject many summers ago ....

Enough kibitzing - another fine post Martin. I particularly like the guy's hat in the third picture down. Where can I get me one of those (to be employed on club nights only of course).

Is there a world record for longest ever postscript?