What happened next XIII 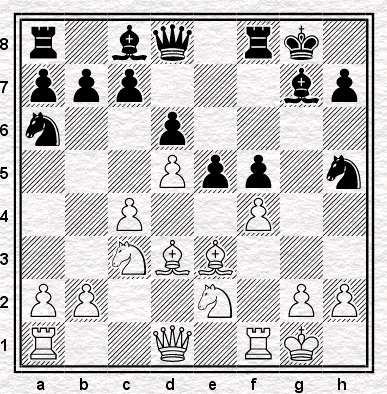 What happened next? The short answer is that Black lost on time, but for the longer answer you may take your pick from any number of sources (scroll to Links) though the Express India report is as good as any:

In an unusual incident at the ongoing Kolkata Open Grandmasters Chess Tournament on Thursday, a top-rated French player had to concede his game after he couldn't sit through his match against his opponent. Reason — he showed up drunk at the venue, slept through his moves several times over, and eventually had to be carried off.

Vladislav Tkachiev of France, who boasts of an ELO-rating of 2669, was declared 'timed run-out'— a rarity in international chess — when officials at the event decided he wasn’t in a condition to carry on against Tamil Nadu's Praveen Kumar. The Indian player walked away with a point.

The sight of a player falling over the chessboard, and eventually stumbling out of the venue, drew a fair number of giggles from the other players at the international championship at the Alekhine Chess Club in Gorky Sadan, but the organisers said action would be taken against Tkachiev.

Alekhine Chess Club official and tournament co-organiser Soumen Majumder told The Indian Express that the incident was bad advertisement for the tournament and that a meeting would be held to take action against the French player. "What happened is unfortunate. It's in bad taste. Once the event is over, we will hold a meeting and decide how to proceed against this player," he said.

Tkachiev's opponent Praveen Kumar didn't want to comment. "All I have to say is that I was given the point after the match, that's all," he said.

The match lasted over an hour, with the French player repeatedly dozing off while contemplating a move. Each time he fell asleep, players around would try to wake him up with a shake of the shoulder. Some even offered him water, and Tkachiev, having briefly refreshed himself at the change room while his opponent waited, dozed off again and eventually had to be carried off.

The flag, according to the game score, fell after White's eleventh move, not after his fifteenth as reported elsewhere. The game is given below: I've not seen it published before. Thanks are due to Mr Kenneth Sinha, Assistant Secretary of the Alekhine Chess Club, who located the score for me.

[What happened next index]

To me the interesting part is that the other players tried to intervene. Apparently the GM code is to not let drunk players sleep?

Something similar happened in a local (USA) tournament. Playing against an expert, Wojtkiewicz fell asleep at the board, and Ehlvest tried to wake him. The consensus here was that Ehlvest "broke the rules", although I argued that as Wojtkiewicz's roommate and ride, he pretty much had to act. But maybe Ehlvest just thought he was doing the normal thing.

Assuming you don't drink so much that you can't stay awake, I wonder how much the odd glass can aid a chess player. I've heard that alcohol can aid concentration, or at least make you focus on one thing. I sometimes feel I'm playing better after a pint but I've never tried this out during a match game as I'm dubious as to thether I really do play better; though I notice some club players do have a beverage next to their board during a match. Is this to help them in their chess play, or purely for the enjoyment of the drink itself?

This is bullshit of course - although I suspect alcohol may help people feel like they're concentrating in certain situations.


Didn't the early world championship matches allow players to consume unlimited amounts of champagne as part of the conditions of play?

I'm pretty sure that in minute quantities alcohol acts as a mental stimulant.