If you've been with us since the start you may already know that what is now the Streatham & Brixton Chess Blog was once the Streatham & Brixton Chess Club Blog. We broke the formal affiliation a while ago but it's still the case that most of our bloggers - even EJH in distant Spain - have some kind of connection with the club. So even though we've dropped a C from our name from time to time we'll have something that relates primarily to S&BCC.

Today we have the announcement that thanks mainly to Richard Tillet (with our Art Correspondent Martin Smith in a supporting role) the club's website www.streathamchess.org.uk has been relaunched. Alongside information for prospective members, contact details and match results Richard intends a section for members' games. After some thought the first game to go up - it may even already be there by the time you read this - will be a fine hack in the King's Gambit by James Toon. James, who's recently rejoined the club after a few years' absence, has kindly agreed to annotate the game for us here.

Completing the circle
By James Toon

The first time I joined Streatham was in 1985. I was new to London and living near Clapham Common. I didn't know much about the club but it was at least within walking distance so I signed up. In those days the club met in a room above a pub somewhere in Brixton. Club nights were lively affairs although I can only remember a few names from that time.

I threw myself into league chess and turned out for Streatham in the London League, the Surrey League and the National Club. As I recall, the club was quite successful in that period, winning the National Club one year. I think Joe Gallagher and Mark Hebden may have turned out on occasion. It never occurred to me to ask whether they were paid for this. I had known a lot of very strong players at university and at that stage they were all students who happened to play chess to a very high standard rather than full-time chess professionals.

I played some weird stuff back in them days. Here's a game from 1987, when Streatham played Fulham in the National Club.

In "Chess for Tigers", Simon Webb says that the best way for Tigers to play against Rabbits is to take no chances and rely on your superior technique. Sound advice, but I've always preferred the direct approach.

The Romantic choice. 4. h4 g4 5. Ne5, the Kieseritsky Gambit, is the line recommended by theory, in so far as any King's Gambit line can be "recommended".

Rejecting 4 … Bg7, which is the safest move, Black sets out on a materialistic path which can only lead to ruin.

The Muzio Gambit: White offers a piece for quick development. The first recorded game was in 1795, but the Italians were playing it nearly 200 years earlier. It may not be to modern tastes but White scores a respectable 57% from 200 games in my database.

There goes another pawn …

… and another piece. This is now the Double Muzio Gambit. It's more exciting than 1. Nf3

Inviting Black to take a third pawn. With check. 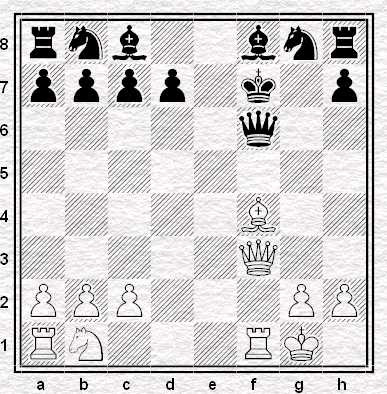 The basic position for this variation. What has White got for this huge investment of material? A big lead in development. And Black's king is exposed. In practice White has scored overwhelmingly from this position.

11 … d6 is not known to theory. It does nothing to help Black develop and, not surprisingly, White's attack proves too strong.

This is usually a bad idea in this variation. Black could improve by 13 … Qf5 when White has nothing better than winning a rook by 14. Nxc7 Na6 15. Nxa8 and 16. Rae1 with a continuing attack.

White wins back all that he sacrificed, and more. Interesting that the triumph of art is measured in materialistic terms.

It wouldn't be right to leave this game without acknowledging the enormous contribution made to the theory of the Double Muzio by the Oxford University player Peter Millican. Peter devoted hundreds of hours to analysing this line. I was one of several university friends of his who agreed to indulge his monomania, as he put it, by taking the black pieces in numerous blitz games. He published his analysis in 1989 in Correspondence Chess No.102.


Thanks to James for the notes and thanks to Richard and Martin for your work on the website.

thanks to Richard and Martin for your work on the website

Richard should take all the credit, including for the idea of including some chess in art on the website. All I did was suggest one or two pieces.

That King's Gambit stuff is spectacular indeed! Well played James! There is another example, by Mr Muzio Millican himself in Levitt and Friedgood's "Secrets of Spectacular Chess".

...which you can see here