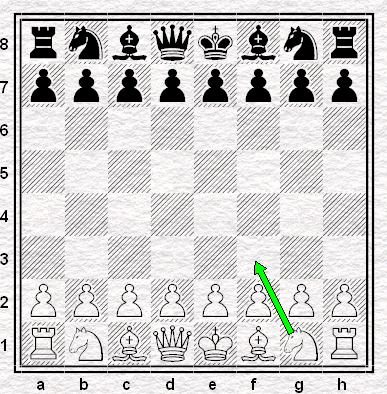 The exclamation mark is for affection, but that is the nature of this series. Of all the possible ways of opening a chess game, it's the one I like the most.

Thinking chronologically, it was my fifth choice rather than my first: like, I should think, almost all beginners I opened with the e-pawn for the first few years of my chessplaying life. At some point I had a season or so with the d-pawn, and in my mid-teens, having read a short pamphlet by David Levy on the Sokolosky, I started playing 1.b4 for school and club. With, I should say, a great deal of success: nobody had seen it before and nobody knew what to do against it. Eventually, though, in a syndrome that was to repeat itself throughout my life, I decided that even if they didn't know how to combat it, I did, I could think of several good ways and I didn't want to have to worry about them.

It's a trade-off: theoretical strength versus personal familiarity. If you choose less well-known options, you have, eventually, to admit that there's a reason they're less familiar, and to ask yourself how much your personal experience with those options counterbalances that fact. That much is, I think, generally understood: perhaps less so, the feeling in the back of your mind, and the effect of that feeling, that you are not playing the best moves, that you will eventually be caught out, that you will have to change sooner or later.

Nothing is so demotivating to a process of work, or study, as the belief that your time will ultimately prove to have been wasted. I have more than once been in jobs where I have been sure, for one reason or another, that I was going to be made redundant, or be sacked. In those circumstances the capacity to do more than the minimum, more than just to turn up (as one turns up at the chessboard) and do one's routine work (as one plays a game of chess) is very much reduced. Can you really, as an amateur, make an obscure system one's own, believing that it is not really sound? One can read, and remember one's reading: but doesn't the capacity to do one's own work depend on at least the hope that that work will be of value for life?

So it was back to the e-pawn until I stopped playing OTB for a few years in my early Twenties. After my return to chess I played 1.e4 again for a few years, before feeling the need again for my own system, my own degree of control over the game. My repertoire with Black changed constantly, a victim of the equally irresolvable problem of how to play sound systems without allowing White a draw. With White, the questions were slightly different, and for a while I answered them with flank openings, playing 1.c4 and keeping my d-pawn away from d4 whenever I was able. I was happy with that, even if it was only the happiness of the ignorant, because, perhaps inevitably, after a few years, I found that only rarely was I happy against 1...e5, in which the main lines all looked comfortable for Black. Solution: play 1.Nf3 instead.

Then 1.d4 started creeping in, partly because I became aware that White seemed to have nothing against Slav set-ups unless he transposed into the Slav itself, and partly because my mental pendulum had swung again, away from personal experience and back towards theoretical strength. I found that 2.c4 was no longer well-thought-of as a reply to 1...d5. I noticed that my score against Hedgehogs was something like a single half-point from several encounters against players of very different strengths. In fact I found that once ...c5 was played Black seemed to have all sorts of ways to deprive White of advantage. For a while, I alternated the knight and the d-pawn. For a while I had a plan to play the knight against weaker players, against whom I had less need to try for an opening advantage, and the d-pawn against stronger players, against whom it was my best chance of winning.

Until last week. When I decided that I like the knight move. I just like it. It's my favourite of the five I've tried.

Aesthetically, it is my favourite. No pawns are committed. It hints, but it does not declare. It spoils nothing. Nothing is done that cannot be undone.

Which makes it the ideal move for somebody who cannot make their mind up. It is a move that has not yet made up its own. It is the decision of the indecisive. Perhaps, at the same time, we can think of it as the Fabian move. Perhaps. It's a "perhaps" sort of move. But for this week, at any rate, it's perhaps my favourite.

It hints, but it does not declare