I originally intended to write something about mobile phones today but after spending some of Monday evening with Simon Williams' new DVD I'm going to hold that post over for another day. Instead I'd like to offer you a double dose of Dutch Duffers' Delight.

I've been playing the Dutch for a couple of years now and up until this point whenever I've been reading books on the opening I've always skipped over the chapters devoted to 1. d4 f5, 2. anything other than c4 or g3. "I don't need to worry about that", I (smugly) thought, "I'm going to play ... e6 on move one and avoid this murky stuff". It was a strategy that served me well until I pitched up at the tournament that Simon organised to celebrate the launch of The Killer Dutch. It turned out that the theme wasn't just that every game had to be a Dutch but that they all had to start 1. d4 f5 and before long I was getting severely tonked on the Black side of a Staunton Gambit and thinking it might have been a good idea to have looked up some of these lines after all.

It seems I've been missing out. For a start there are variations like 1. d4, 2. Nf3, 3. d5 against my 1. ... e6 and 2. ... f5 move order which I should really have explored before. If nothing else I might have discovered a lot sooner that a dozen moves into an Olympiad game one of the finest chessers that England has ever produced once reached this position with White 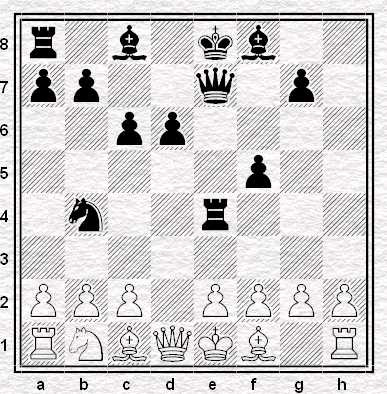 Presumably Miles was hoping that Vaisser would piss himself laughing and then lose on time when he went off to change his trousers but sadly White's superb strategy proved only good enough for a draw. A for effort though.

Happily Psycho-Cowboy's DVD has something for Black that's even better than Tone's impression of a person who barely knows how the pieces move. After 1. d4 f5, 2. Bg5 the recommendation is 2. ... h6, 3. Bh4 g5 intending to answer 4. e4 not with ... Nf6 (which looks like, and possibly is, the only sensible move) but this:- - a move truly beyond symbols although I'd be tempted to award anyone who plays it a "!!" - one for balls and one for comedy value.

Williams himself played 4. ... Rh7 in a crucial last round game a few years back. A win would have left him sharing first place with Nigel Short but unfortunately the game did not go well.

'Debacle' is perhaps not an unwarranted description of this game although one guy on chessgames.com was minded to go further.

How could Williams play this crap, when the ("European Individual") championship was at stake?? (He was in the lead with 6 others at 6.5/9)

Was this fixed ?!?!? Or just ludicrously stupid ??

Well neither as it happens. On the DVD Simon shows that had he not forgotten his opening preparation he would have obtained a good position with just a single improvement. That's the thing with moves like ... Rh7 I suppose. The line between playing like a genius and playing like a beginner is fine and easy to cross - and you only need to mess up once and your doomed.

Clearly our internet friend is not keen on the rook manoeuvre and that's without seeing what Williams had planned in response to 5. Be2 instead of Gormally's Qh5+. I think he might actually have spontaneously combusted had this line appeared in front of his eyes although to be fair I rather doubt Siegbert "Herr principles" Tarrasch would have made much of it either. If 4. Ng5 in the Two Knights Defence is a "duffer's move" how to describe this:- 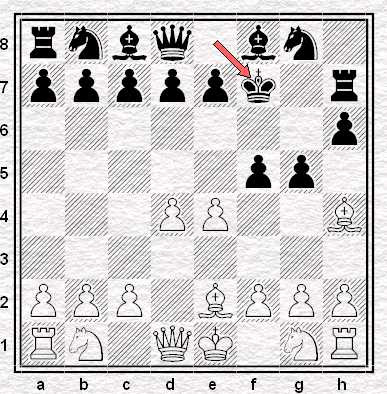 Does anybody know the German for what the fuck?

After a frustrating last 18hrs or so, I can't tell you how much that's cheered me up. It has some superficial resemblance to a Fred on steroids (though since Black isn't giving away two pawns I suppose the comparison is bust).

I played several blitz games in this line with Tom at lunchtime. Black got wiped out a couple of times (when I was Black) but also several very decent positions.

"What the fuck?" has no literal translation. Best would be probably "Was zum Teufel?" (What the devil?) Whatever this says about the languages.

Is it really a "recommendation", or "play it in a quickplay for a bit of a laugh"? There are better ways to win a piece in return for near overwhelming compensation.

Oh Richard, you're such a party pooper ;-)

Fortunately at my level the difference between "quickplay for a bit of a laugh" and "serious game" is not so great.

Talking of preparation - isn't that the game Simon played immediately after getting his GM? I seem to remember speculating at the time that his preparation may have been of a consumable nature. Was this unreasonable of me?

Didn't Williams get his GM title at Hastings EJH?

My mistake. So was it a GM norm he'd got before the Gormally game, or did he have a similarly quick loss at Hastings after he clinched his title, or is my fortysomething memory making it all up?

SW's game the day after gaining the title (against one of the Perts IIRC) was indeed nasty brutish and short. I rather suspect he cared not one jot.