Commenting on last week's Chess in Art Postscript: Keeping Two's Company fellow blogger Tom Chivers hinted, with tongue in cheekiness, that this series appears to be making a bid for the World Record Longest-Ever-Postscript. You bet it is. We've long since overtaken my previous Personal Best (a P.S. to Santa, many, many years ago, detailing Christmas stocking expectations at length; at great, great length). I'm hoping that Tom, as S&BC Blog's Chief Statistician, will bang the gong when we hit the WR. In the meantime I'm also going to make an attempt, kicking off with this post, at the Longest-Ever-Postscript to a Postscript - start counting, please.

Last week the excited, not to say over-wrought, critical faculty of your Maybe-World-Record-Longest-Ever-Postscribe alleged that the Chess in Art works then displayed were afflicted by shortcomings in the composition department, and they could do themselves a favour by forgetting the meat and two veg. formula so many of them served up. On my plate was this entertaining piece by Giovanni Garinei, but I was obliged to pull my punch just hours before publishing as evidence emerged, from the mustier corners of my bookcase, that there was more to his picture than had been supposed. It had been cropped. 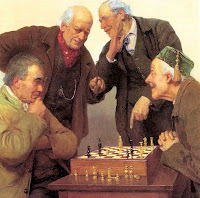 Are we missing something?

I'm pleased to say that I have since found, by accident, a postable image of the full picture, including the callow youth who had been so casually chopped off the Tableaux Échecs version: 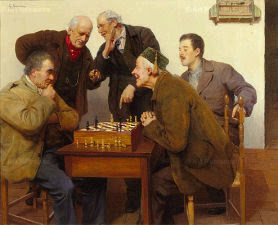 It is good to see the full complement of spectators, even if the older generation sets a poor example by giving the youngster the cold-shoulder; elders aren't always betters. However, on close inspection, the full picture is altogether rather curious: specifically, in the way it is framed. It has wandered a bit off-centre.

If it had been a photograph you'd think someone must have jogged the camera, and one would sympathise with any scissor-happy editor who might want to tidy it up, though not with Woodmansterne who, for one of their greeting cards, ruthlessly expurgated the young fella just to fit the remainder into a more conveniently square format.

So, looking at the full monty, questions spring to mind such as why Garinei excluded the back of the chap on the left (the one trying to find the move); and why he included the not very interesting strip of dark space to the right of the back wall. Why not get the whipper-snapper to move to the right, shift everyone else over too, and thus centre the group, left-back and all? And also, while we are on the subject, what happened to their feet?

It's not as though Garinei couldn't hit the bull's-eye if he wanted, as in this work in the same lop-sided jokey vein, though, I'm sorry to say, it has definitely nothing to do with chess.

Unless they are playing blindfold.

Unfortunately Signor Garinei isn't around to answer (or confirm his name - see Acknowledgements below). It's all a bit odd, leaving us with the intriguing possibility that even the second full-on chess image is itself already edited at the edge and maybe along the bottom. So for the moment we are left high and dry, but with the mouth-watering thought that there may be yet another untrimmed version (the original) waiting to be unearthed, and we might be able to do a future Postscript to the Postscript to the Postscript. We dream of a hat trick and maybe one more for the record book. Eat yer heart out, Mr. C.

The full Garinei image is on this Italian site, where they name him as Giovanni Galilei
and give the date of the painting as "c1880". "Galilei" is wrong (they are confusing him with the grandfather of the famous C16th astronomer). There are several other Garinei pictures on the web tracking his fortunes at auction. None has any obvious chess interest. If you want to get the full picture as a poster for your club room, at $39.99, try here.

76% of statistics are made up on the spot.

Maybe they are framed that way (if indeed they are) so that they look like they are on a white square, a black square is just to the side?

Incidentally, are we sure the game hasn't finished? Or is about to? Either case adds a different tilt to the title; especially the former.

76% of statistics are made up on the spot

Incidentally, are we sure the game hasn't finished? Or is about to?

I think the position on the board is, White: Ka1, Qe5, Rg1, Nh2(?), pc6; Black:Ke8, Rc3, Nb8, pb3. So Black is already a Q down and is now in check with both his remaining pieces in a fork to the WQ. Maybe the title should have been "Now you are completely busted".