Chess in Art Postscript: A Game At Chesse

We are back in the sixteen hundreds, sixteen twenty-four to be exact,
The stage is round and ready, the players eager to act.
Curtain up! Now, let the fun begin!
Chesse! Speeches! And high jinks in between!

Thomas Middleton, gent., makes a scene-setting introduction
To "A Game At Chesse", his rabble-rousing production. 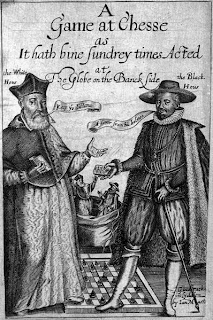 "What of the game called chess-play can be made
To make a stage-play shall this day be played.
First you shall see the men in order set,
States and their Pawns, when both the sides are met,
The Houses well distinguished; in the game
Some men entrapped and taken, to their shame,
Rewarded by their play. And in the close
You shall see check-mate given to virtue's foes.
But the fairest jewel that our hopes can deck
Is so to play our game to avoid your check."

The Royal Game will wear a thin disguise
Masqueing duplicitous rivalry twixt two scheming sides:
An intrigue, played out between Spain and fair Albion,
In a satire well wrought and wittily rhymed (well, nigh on). 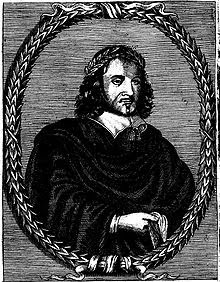 Thomas Middleton (1580-1627)
Tom was erstwhile contemporary of Ben, and of Will,
The crowd loved his barbs then, and maybe would still.
But not so the Spanish, a dour humourless bunch,
Who called the High Chamberlain, and took him to lunch.
Well oiled, they complained of Tom's lampoonin' innuendo.
And got the play banned, and thrown out the window.

He was forbidden to write one more tittle or jot,
Though duped he had been in a war-mongering plot
To declaim provocative jibes 'gainst the Court of Iberia
And whip up Olde England into xenophobic hysteria.
They'd used Tom to stoke ire 'gainst the Spanish King's name.
Pen-pusher had been pawn-pushed in some cunning knave's game.

Middleton's penultimate show titled "Women Beware Women",
Was all sex, and lies, and heavenly bodices rippin'.
One scene shows a chesse game with hints of skulduggery,
Suggesting lustful seduction, and procurement unmotherly.
It is currently revived at the theatre Olivier,
With fine Harriet Walter as the chesse-playing Livia.
Your S&BCC critics will watch, eyes wide and agog,
To report back, dear reader, with comment, next blogge. 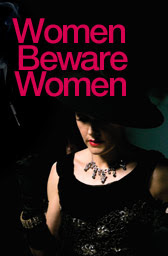 But not in rhyming couplets.

The account of Middleton's sting is based (loosely) on Wikipedia, for better or for verse.
For further observations on past Spanish-English relations see also We Are Not Amused.

Middleton's Introduction is given in the indispensable "The Poetry of Chess" edited by Andrew Waterman, Anvil Press, London, 1981; of which maybe more anon.

Next Blogges in this WBW sequence are linked here: Second Parte; and Thirde Parte; and Finale Parte

As to whether it's a coincidence or not I have no idea. That said, on Mickey's website there aren't too many links but there is one that might be of interest.