Didn't They Use to Put Chess on the Telly?

Did you see that chess programme on TV the other night? No? Me neither, because … well for a start because there wasn’t one, obviously.

That was how today's post was originally going to start - a pretty safe bet I thought - but jigger me backwards if the BBC schedulers didn't go and bung some chess on the box: a repeat of something from last winter. How to Win at Chess was first broadcast over Christmas 2009, and to a largely favourable reception if my non-playing friends are anything to go by, but it was the first programme devoted to our favourite game for what seems like an eternity and there hasn’t been anything since.

There was a proposal for a feature on junior chess at the recent British Championships but sadly it came to nothing. Our best chance of finding some chess on the box any time soon would seem to come from the cameras that were stalking Peter Williams in Canterbury although whether this footage will ever actually make it to the screen remains to be seen.

These days chess appears on our televisions about as frequently as Haley’s Comet turns up in the night sky. Older readers will recall, though, that it was not ever thus. The Master Game came a little too early for me but I do remember a similar series in 1986 which featured the likes of Kasparov, Short, Nunn and Korchnoi amongst others. In fact, looking back, it seems as if chess was never off the tellybox back then.

Apart from the countless editions of The Master Game, there was a programme on an Olympiad ('86 or '88 if memory serves) narrated by Stephen Fry; a Speelman vs. TV Audience challenge where the viewers phoned-in their votes to decide which move would be played; a Short-Kasparov match of six 25-minute games and the World Championship always got covered. All of these were great to watch but if I had to choose a personal favourite it would be Play Chess, a series which introduced a younger audience to the game. 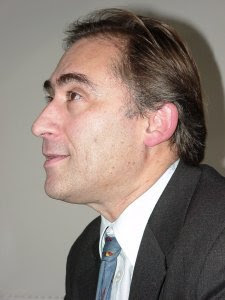 It was clearly our greatest era and nobody, aside perhaps from a certain R.D. Keene, could challenge Bill Hartston’s claim to be television’s “Mr. Chess”. Although no longer actively involved in the game, back then, some tournaments broadcast late at night on ITV aside, if chess was being televised Hartston would inevitably have his fingers in the pie. I caught up with him for a chat about his appearances on TV and why the game has all but disappeared from our screens. Our story begins, as many chess narratives do, in Reykjavik forty years ago …

Jonathan Bryant:
“How did you get involved with presenting chess on television?”

Bill Hartston:
“It started in ’72 with Fischer–Spassky when I was one of a group of commentators. We did a weekly programme on the match and they seemed to like the stuff I was doing. The producer of that was a guy called Bob Toner who was also the originator of The Master Game. That came about because at the end of Fischer–Spassky he thought there was a future for chess on television.

Bob was a man whose mouth, brain and feet always seemed to be operating completely independently and often flitted in different directions at the same time - which gave him just the right short attention span needed to make constantly fascinating TV programmes. We had this meeting to discuss what to do next; it was mainly him thinking ‘it must be competitive, you must have pieces moving on their own’ and he came up with this idea of the players speaking their thought processes. He got technicians in Bristol to work on the problem because they didn’t have electronic chess graphics back then and they came up with something quite beautiful that worked.

The first two series of The Master Game resulted from that meeting. It was largely because I’d won both of them and was there throughout all of the production that I knew very well what was involved. It seemed natural that I should then move up to … well, I think in the first international one I got knocked out in the first round or something and then moved on to become commentator.”

JB:
“Play Chess was different in that it was instructional and aimed at children I think.”

BH:
“Yes, very much at children. Chess was done by Documentary Features at that time and the Children’s TV department said ‘Could you do us a chess programme?’ so we made a pilot after one of the Master Games. That went down well with them so we did the series. The funny thing about Play Chess was that one year at least it was on over the Christmas holidays every morning immediately after a programme called Why Don’t You…? - ‘Why Don’t You turn off your television and do something useful’ - and we got a bigger audience than they did. (laughs)

- I was astounded to hear this. I bet everybody around my age, I’m in my early 40s, remembers Why Don’t You …? Even today, some thirty years on, the programme’s full title (“Why Don’t You Just Switch Off Your Television Set And Go Out And Do Something Less Boring Instead?”) remains etched into my brain.

It was hugely popular. We loved it even if, or perhaps because, we cheerfully ignored the programme’s central message: staying home all morning watching television was always going to be preferable to venturing out into the fresh air! Play Chess getting an even bigger audience than Why Don’t You…? was truly astonishing.

I expressed my surprise to Bill. Was it really true?

BH:
“Yes. We were getting audiences of about 2 million which was amazing.”

JB:
“The BBC must have been pleased surely?”

BH:
“Oh yes but I think that with all the chess things, for the cost of the programmes the audience was extraordinary.”

JB:
“Did you write it? Did you decide what was going to be taught and how?”

JB:
“Were you happy with the result, with what you’d created?”

BH:
“Not with my own performance but the general tone of the things yes I think we did quite well.”

JB:
“‘Not with my own performance’ meaning …”

BH:
“I’m sure I’d cringe and hide under the nearest piece of furniture if I saw them again now.”

JB:
“Would it even be made these days? One of the ironies of television at that time compared to now is that today there’s 24-hour television and huge numbers of channels while back then it would have been, what, three I would imagine? Three channels?”

JB:
“Three or four. The point is there’s so much more TV and yet …”

BH:
“I think it’s just a question of there being no-one within the BBC who wants to do it and it’s very difficult doing things from outside. Also I think Short-Kasparov [1993 – JB] killed everything. Once you’ve had an Englishman playing for the World Championship there’s nowhere to go. Anything else would be a comedown.

JB:
“I remember that people I knew who didn’t even like chess particularly would watch that simply because it was on so much.”

BH:
“Yes. Well I suppose the history of chess on television is from Fischer-Spassky to Short-Kasparov. They’re nice bookends. They both had interest outside the mere chess.”

JB:
“Because … well Fischer is obvious but Short because he was English?”

What chess on TV was like in the olden days - well at least it was on TV then.

JB:
“And you were involved in the commentary for that as well. It’s the last one I remember you doing which maybe because it was the last one.”

BH:
“Yes. That was completely ridiculous because Channel 4 thought that they had bought the rights to the match which stopped the BBC covering it. The BBC were so annoyed that they had been used to push up the price that Channel 4 paid for it, though, that we did the thing. At one moment they were denying access to the games to the BBC so we had at one man that nobody knew about with a pinhole camera going into the Savoy.”

BH:
“Yes! We weren’t transmitting the pictures of course but during the first game of the match the only source we had for the moves of the game were this guy’s pinhole camera and the Channel 4 teletext. There was a BBC van outside the Savoy where interviews could be done and since they were doing one at the time we couldn’t get the pinhole camera thing because they only had one line to transmit stuff to us.

So David Norwood and I were doing the commentary for the first game and the only source for the moves we had was teletext and there was one move that was wrong. We were broadcasting as though we were watching the game live and up came this move that just made no sense. I just guessed. I looked at the ones after it and guessed what the move was, fully prepared to go back on it if necessary. It was the only thing to do and fortunately I’d guessed right and we got through.

When we finished the programme Norwood just looked at me and said ‘That was amazing. Well done.’ He said when he saw the wrong move come up on the teletext he thought ‘That’s it. We’re fucked.’ (laughs)

Then the producer came in and said ‘God that was hairy’ and he of course hadn’t been following the moves. Norwood said ‘You have no idea how hairy that was!’ It was an amazing experience.”

On that hirsute note, so ends the story of chess on British television: Fischer-Spassky 1972 to Short-Kasparov 1993 with not much to follow. Oh well. At least these days we can look up clips from the old days on Youtube.

We'll be back on Wednesday for a little more of Bill Hartston. Please join us then.

I used to watch 'Play Chess' and 'Why don't you?'. Re: the 'Why Don't You?' theme song, I could never understand why a TV programme was telling me to switch off my television. I obviously didn't listen to them anyway.

"Bob was a man whose mouth, brain and feet always seemed to be operating completely independently and often flitted in different directions at the same time - which gave him just the right short attention span needed to make constantly fascinating TV programmes."

Actually Kasparov-Anand 1995 received minimal coverage on the BBC. One 30 minute programme a week on BBC2 Sat morning I think.
Hartston, Miles, Norwood, others were seated behind a long curved desk. Francine Stock presenting for some reason.

There should have been a question mark at the end of that sentence ... is in, I was asking whether it was the last one Bill did rather than stating it as a fact.

Yes, great quote indeed. Got quite a few lovely little nuggest like that from Bill during our chat. Keeping watching this space.

Anybody know if she plays or not??