With the championships in full swing, now seems the perfect time to remind ourselves that should whoever wins Canterbury take a leaf out of Kasparov’s book and pen a tome on their Great British Predecessors* it will be necessary to include a chapter on one Raymond Dennis Keene. Raymondo’s triumph may be four decades old now but neither the time that has passed since his victory nor Tony Miles’ disdainful response to RDK's claim of "14 separate British championship titles" – “That's twelve more than are generally known about” - should blind us to what Keene achieved in his day.

Blackpool 1971** is the championship that will forever be associated with Keene. It was, as we will see, very much a tournament of two halves for my occasional fellow blogger. After decimating the field in the early rounds he finished with either an unseemly stagger over the finish line or a triumphant coast home depending on your point of view.

That RDK emerged victorious is only half the tale though. Perhaps an even bigger story is his crucial game with Jonathan Penrose on the second Monday of the championship which proved to be of critical importance in deciding not just who would win that year but also the outcome of the battle between Ray’s generation and chessers of the old guard. The truth is, Raymondo didn't just win the British Championship he ended an era - and that makes Blackpool 1971 worth a closer look I hope you'll agree. 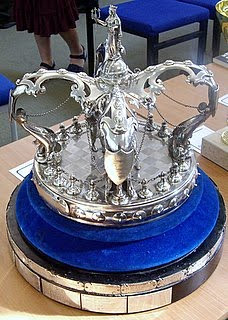 Whoever takes home the trophy this year will find that the name R.D. Keene is already on it.

The relatively quiet draw (Bonner, 41) with which he began his campaign gave no hint of what was to come. From the second round Keene began a blistering run, his next six games including that marathon with recent S&BC Blog interviewee Eric Holt, a brace of wins with the Black pieces (Sugden 0-1, 29; Ludgate 0-1, 63 – the latter containing what RDK considered to be one of the better combinations of the whole tournament), an easy victory over regular victim Andrew Whiteley, the defeat of Penrose and just a solitary dropped half-point (Knox, 25).


By the time the dust had settled our man was sitting comfortably on 6/7 a point clear of his nearest challenger (Whiteley) and a further half-point beyond everybody else. It's hard to imagine that Raymondo's confidence could have been any higher but instead of continuing to machete his way through the field his tournament suddenly took a radically different course. It seems that he had a quick look at the standings, calculated that 8/11 would be enough to finish on top of the pile and decided that for the remainder of the proceedings he would spend as little time as possible at the board.

RDK’s new halving-out strategy did not receive a serious challenge from John Littlewood (½, 38) and still less so from Bill Hartston (½, 14) but Bob Wade was an entirely different kettle of fish. The defending champion wanted nothing to do with Keene’s early doors peace offer and a double-edged game developed; Wade had the bishop pair and chances to menace on the kingside while Ray had given White doubled pawns and had his own protected passer on d4.

On move 24 Keene dramatically sacrificed an exchange with opinions divided as to whether he had sufficient compensation. Ritson Morry felt Black had a “promising position” but Raymondo himself later disputed this assessment. He felt he had been losing and had been lucky that Wade’s time shortage had forced him to agree a draw half a dozen moves later.

Whatever the truth of the matter, Keene entered the last round knowing that while beating Williams would guarantee him the title outright another draw would mean that Whiteley alone could catch up - and he'd have to defeat Wade to do so. Cue a very firm shutting-up of the Raymondo shop; a blink-and-you-missed-it final game where the queens left the board on move seven and the players followed them shortly afterwards. 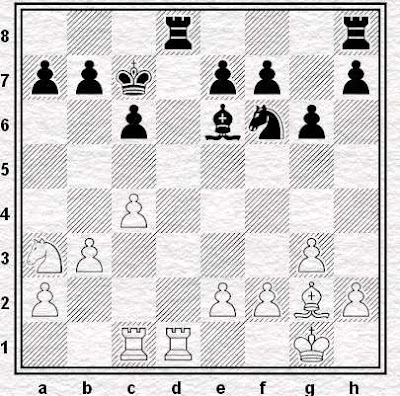 I like to imagine Ray immediately repairing to the nearest bar for a celebratory tipple. If he did his supping would not have been in the least bit disturbed by the prospect of a play-off. Whiteley was Keene’s whipping boy throughout their careers; he had lost every one of their seven most recent games and by 1976 had amassed a lifetime score of +1 =5 -13 against his nemesis. That he had no chance in a match between them was as apparent to Whiteley, it seems, as it was to Raymondo; his last round game went only one move longer than Keene-Williams before he gave up and agreed a draw. 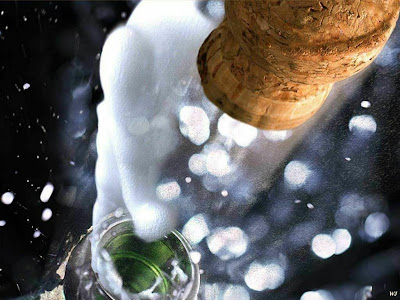 ... but let's take a step back for a moment; what about that encounter with Penrose? It seems to me that with the benefit of hindsight we can see it as one of the most significant games between two British players of the whole decade and no less meaningful than the two Short-Speelman Candidates matches that would be fought twenty years later.

Why so important? Well for a start Penrose had dominated British chess for more than a decade winning an unmatched ten titles between 1958 and 1969 so Ray, having shared second place with him in Coventry the year before and come second to him at Bristol in 1968, would have known from the off that to realise his ambition to be British Champion he would have to take Penrose down at some point. Their 7th round clash was about so much more than who was going to win that one tournament though: it was a fight for the right to be considered the country's undisputed Number One Chesser and perhaps even a struggle for the very future of British chess.

After being head and shoulders above everybody else for so long, in 1971 Penrose suddenly had a genuine contender snapping at his heels. It wasn't just that Keene had already beaten the old champion twice - in the London League (playing for Streatham!) in 1967 and in a County match in 1970 - he'd also temporarily taken possession of England's top board on more than one occasion - initially for a couple of isolated matches in which his rival had not played and then for the entire final stage of the 1970 Siegen Olympiad after Penrose fainted in the middle of a match from the preliminaries. By the time Blackpool came around Keene was even about to replace his rival at the head of the new grading list, albeit only by a single point.

When they sat down to play both men must have known that Penrose's position was under threat like no other time before but if Keene had seen the game as an opportunity to end a long reign and seize the throne himself he must also have seen it as the chance to turn the entire British chess scene around. Raymondo considered the Penrose years to be a time of stagnation and decline which had left England as a third-rate chess power; more than that he blamed Penrose personally for the sorry state of English chess because his rival's annexation of the British championship together with his famous victory over Tal in 1960 meant that he was the only home player that organisers of foreign chess events wanted at their tournaments. 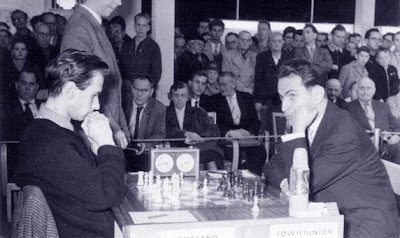 Penrose playing that game against Tal at the Leipzig Olympiad

So for Keene the long-term dominance of the British game by one man was limiting the opportunities available to young up-and-coming players, not least RDK himself, and to rub salt into the wound this man wasn't really interested in playing abroad anyway and consistently turned his invitations down. The extent to which this irked Raymondo can be seen from his explanation of why he agreed to play at Palma de Mallorca at the end of the year in the midst of an already heavy schedule,

not to mention the entire chapter he devoted to the theme in his 1977 book Becoming a Grandmaster and his contribution to Revolution in the Seventies in which he gave the argument another airing some 35 years later.

In Raymondo's eyes, then, if he could only defeat Penrose he would at a stroke secure a virtually unassailable position in the race for the 1971 championship, get top-dog status and bring a new dawn for British chess. The stakes could hardly have been higher.

And the result of this momentous encounter? A “crushing defeat for Penrose at the hands of Keene” (Ritson Morry).


The king is dead long live the kings. After this game, a 2nd= finish in 1972 notwithstanding, Penrose never returned to his former heights and eventually he switched - with a good deal of success it has to be said - to correspondence chess. In his place younger men such as Keene, Evil Uncle Ernie, Hartston, Basman and later Tony Miles became the leading over-the-board players of the day.

At some point we will return to the significance of this tournament for British chess in general and Ray in particular but for today let us end with thoughts of that final round at Blackpool. Keene was British champion and had won the tournament without losing a single game. The number of titles that Keene possesses may later have become a point of conflict between him and Miles but nevertheless Blackpool 1971 provides absolute proof that Ray could most definitely play.


* or get an underling to do it for them at least

Do we actually know whether Whiteley's or Keene's game was agreed drawn first?

Ritson Morry's report in the August BCM of 1971 says, after reporting RDK's draw:-

"Now Whiteley had his chance, we foolishly thought. He had the better game against Wade and by playing his heart out to win there was the chance of £150 in cash and a play-off for the Championship. Against this had to be set the fact that he would at worst tie for fourth prize and might lose about £50 in cash. The odds were something like 3-1 in cash plus the far greater honour and glory of the championship. He settled in 14 moves for 60 pieces of paper...."

This rather implies that RDK's was first. That, in any event, was what I had assumed to be the case.

Yes, it implies it - provided Ritson Morry actually saw it happen. Does the report suggest he was there to see it? If he was, then for sure.

While I'm here, after I'd complete this post I came across a thread on the EC Forum that has some material related to the second half (i.e. the battle with Penrose).

Something was bugging me about this question about which draw was agreed first. It poppped into my head when I woke up this morning ...

RDK sent a letter to the BCM complaining about Ritson Morry's coverage of the event. It was published in the November 1971 issue:-

regarding the claim that Whiteley could have won £150 cash

“I have won the last 7 games against Whiteley and I did not fear a match. Whiteley could not get £150 in any circumstance.”

i.e. not saying that Ritson Morry was wrong about which game finished first.

This is from my notes. I no longer have the paper copy in front of me but I'm pretty sure I'd have recorded it if RDK, or anybody else, had said Ritson Morry was wrong about which game finished first.


Still not quite 100% 'proof' but suggestive enough to support the assumption that Raymondo-Williams finished before Whiteley-Wade I think.