Something to try if you're bored on the rest day

After 160 moves on Friday and 78 yesterday, I imagine Keith Arkell might be feeling at a bit of a loose end today. For him, and for anybody else (player or spectator) who finds themselves in an absence-of-chess induced bout of thumb twiddling, here's something to occupy the long hours until 2:15pm tomorrow afternoon ...

S&BCC's own Angus French leads with an unbeaten 5/6. Go Angus!!] 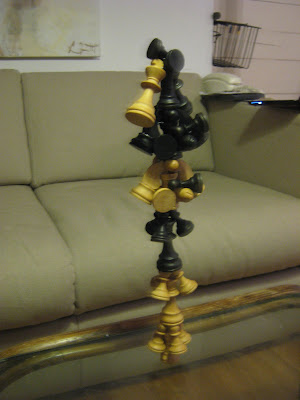 Here's the picture of the Great Chess Pile as promised. The history of it is as follows:

It all started with a conversation when I was still at school with a lovely fellow, and fine player, called KW Lloyd who told me that he'd wasted much of his time at Cambridge trying to pile an entire chess set on one white rook, but had never succeeded. I didn't know whether he was just making it up, or how hard he'd tried if he wasn't, or how close he'd come, but when I got to Cambridge and needed a way to waste my own time, I remembered the idea and started trying it myself.

The standard cheap set of the time, which I had with me, was made of French boxwood and had knights with ears that pointed upwards. That's very important.The first stage was designing the architecture.

Just trying to balance pieces on top of each other is clearly never going to work, and I quickly realised that they key was to come up with a design that comprised a number of storeys, each with a top that allowed the next storey to rest on top. I soon came up with the following plan:

1) You can hang a couple of knights by their noses over the top of a rook. The knight's ears then form a four-pointed base for the next level top balance on.

1a) Furthermore, two bishops can be tucked under the knights' paunches, held in place by the weight of the knight. Two rooks with knight-and-bishop accompaniment thus gets rid of all the minor pieces.

2) Three pawns may be hung around the Queen's crown to provide a three-point base made of the pawns' bobbles for the next level.

3) The kings' crosses can be used to attach the kings to the top of a rook.

4) That leaves only a large handful pawns to get rid of. Four of these can hang around the top of the rook at the base of the pile, kept in place by the weight of a rook/knight/bishop or queen-and-pawns combo above it. Two more pawns can sit between the ears of the knights. Two more pawns can be right at the top, where the kings' crosses are. Which leaves, I think, only two more pawns to be balanced on a couple of bishops that are already in the pile.

Easy! Only it took me most of my undergraduate career to get it to work, and my rooms was constantly echoing to the sound of clattering chess piles.

You can see why Islam banned representative images in their chessmen in the Middle Ages - flat draughts-like pieces are so much easier to pile.

My eyes are glued to the screen

Hi. Still enjoying your blog, but I wanted to check back through the July posts, and they only go back to the 23rd.

I played the Hitchin Open some time around the end of the Seventies and somebody had produced a similar pile - though with fewer pieces - and left it on one of the boards.

I recall a player walking past and saying "I had a position like that once, but I lost" which isn't necessarily Wildean in its wit but may at least be the reason I remember this.

PG - you're right. They don't seem to be on the monthly index. How odd. I don't know why, but I'll look into it.

(Having looked at a few monthly indexes, there seems to be a problem with some, presumably the longer ones. I don't know if it's a temporary problem, or a known one, but we'll see if we can find out. Normally I'd expect to see a "next page" function if there was too much content for a single one.)

Nice esoteric chess history piece Jonathan. I have made your posting the answer to a 'Cryptic Chess Puzzle' question.

The Streatham & Brixton Chess Blog is a great read. Clearly a lot of thought goes into the articles. Keep up the great work.

We'll get the problem sorted ASAP - thanks for pointing it out.

Were there any posts in particular you wanted to look at? If so let me know and I'll email you the direct links.

Thanks for your kind words... although the credit for today's post should go to Bill Hartston. He's the one who put all the work in.

Hi JB. No because what I do is have an occasional skim through here and there, and a proper read through once a month.

This should now be fixed, thanks to Tom and the generosity of Diamond Geezer, who went out of his way to help with a query from people he had never met or come across in his life. We commend his blog to our readers.

Thanks. Will have a double session next month.

We now have the internet instead to waste time with , I have now done this for 5 weeks in COVID19 lockdown . I need a boxwood set with nights that have ears