It's not quite halfway, but it's never too early to have a tailpiece. So, are you sitting comfortably?

And if so, on what, dear reader, on what? A pertinent question, perhaps even a sore point, if you remain, maybe for some time, at a chess board. Where, in short, do you park your fundament, your hunkers, your sit-me-down, you know, your tail?

Over there at the British Chess Championships at Canterbury they have to spend several hours a day on one of these: 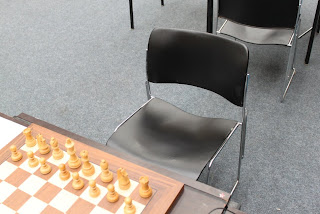 One can sympathise. But it must be more comfortable than being shoe-horned into Rodchenko's revolutionary play-station circa 1925: 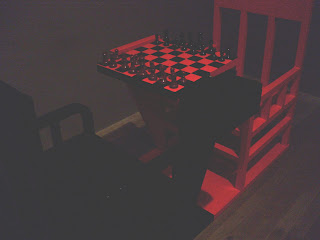 This murky image shows his all-in-one table/chairs/storage/colour co-ordinated chess set designed for a workers' club back in the USSR. The seat is bolted down and, without wiggle room, looks like an extremely tight sit. It casually tosses aside left-inclined principles of comfy chair design - which dictate a bottom-up approach.

But, Comrades. Beat False Medievalism with the Red Wedge! 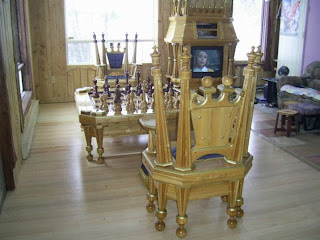 These days an ensemble such as above might do for some unfocussed wannabe Druid who prefers to watch TV while they adjust their set, but seven-hundred years ago in the real days of genuine yore they put their backs into their chess. And chess into their backs - as in this 14th-century hunk of seat (below), that your blogger chanced upon earlier this year in a delightful corner of Mallorca. 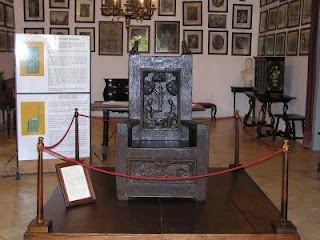 In la casa at the Jardines de Alfabia. Bunyola, Mallorca.

Hitherto it has been unclocked by the Chess in Art community. And so we use the occasion of the British chess-fest to reveal it to all and sundry. Remember, you saw it, and we blogged it, here first. This is the chess in close-up: 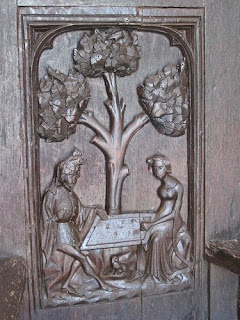 Now, the Big Question is why on earth would any furniture maker think it was 14th-century cool to have a bas-relief chess board impaling the lower vertebrae of their client, and a tree-trunk wedged between their shoulder blades?

It helps to know that the characters are drugged up to the eyeballs with a love potion that today would get you arrested. They are Tristan and Isolde. Young Tristan, as the much-told yarn has it, was entrusted by Uncle Mark with a philtre d'amour, and he was supposed to drop Isolde such a Mickey Finn as to make her compliant with the old goat's entreaties. But he disobeyed orders and the two youngsters convivially egged each other on to knock back more than the recommended dose.

As for the chair: any 14th-century admirer prepared to plonk their tender parts into its oaken embrace might hope to be rewarded with an uplift in their libido: that the ectasy represented on the chair's upright might be absorbed by contagion, transporting the plonker to his own seventh heaven via the back of beyond.

Which is fair enough, and the up-side. But what is thoroughly perplexing, and the down-side, is that our loved-up couple should spend their happy hour playing chess, of all things, and as a consequence the over-optimistic punter might rise possessed only of a depressing compulsion to try and improve his grade. 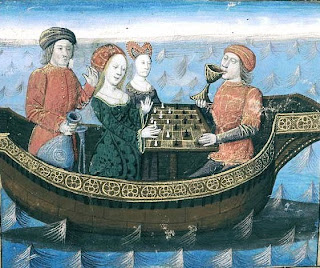 This ancient image, contemporary maybe with Chess in Art XII, and the Alfabia chair as well, give or take the odd century or two, also shows the dipsy pair, alive on the ocean waves, hitting the bottle in the early middle-game. Note that chaperones are on duty to make sure they play the board and not the man (or woman, obviously).

Actually, in the furniture scene, Uncle Mark is up in the tree spying on the playful couple. You can see him bird-like top right (detail below). So in this version of the story the chess is nothing but an artful ruse to put him off the scent. 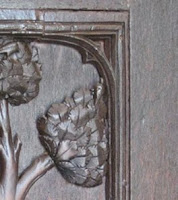 He has perched himself on the branch, not just to note Trist & Issy's TNs, but to check that they are behaving in the approved manner, that there is no hanky-panky and, as befits a game of chess properly pursued, everything is above board. Alert to the danger they'll not reveal their preparation and just play down the main line.

There are many modern uses of the same story, even without mentioning Wagner. The one below has Uncle (behind you!) out of his tree and on the prowl. It is chessless. My goodness, it also shameless. Just look at that blatant brand placement. 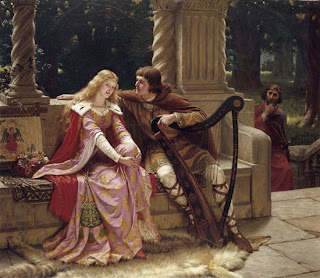 So: the travails of the regal heart and the play of the royal game; their bygone standards of courtly chivalry; our bearpit of dog-eat-dog chess politics. We can put it all in a nutshell, thus. Bona fide then, but not so FIDE now. Boom, boom!

And with that, we end this Canterbury Tale (but just mention, en passant, that Chaucer in The Book of the Duchess has an episode on a game of ches (sic) in which the loss of it betokens losing a Lady; so beware) and return you, sitting comfortably, to the British Championships...

Thanks to ejh for the Chaucer reference, of which more, maybe, sometime. Rodchenko's chess table was reconstructed recently at Tate Modern.

The Victoria Kijiji one looks cool.

Thanks you for your comments M Chivers,
I am designer of this chess set. The comments of M, Plain on CCI France: a Canadian creator whose talent of cabinet maker is indisputable and whose creations deserve a Venetian palace! I shall install(settle) of much better photos in a decoration(set) much better adapted on Blogger soon.
Thanks again

You are a very small man from the inside Mr. Martin, very narrow minded, and probably very imbued with yourself, which must surely hurt you when you come to play a chess game at Canterbury. It is said that in general the human being can not see further than himself, I would say that this sentence fits perfectly to your narrow-mindedness and is also a very developed narcissistic side. I hope at least that you are happy in everything. To judge a work it is necessary first to know the author, or at least have the mind open enough to be able to decipher the meaning or will of the creator through it. But the narrowness of your mind can not go as far, especially because of your highly developed narcissism.
Good to you, mr. MARTIN smith ...