Chess in Art Postscript: A Game At Chesse - Thirde Parte

There is still a bit more to say in connection with Women Beware Women, Thomas Middleton's C17th play, recently revived at London's National Theatre, to which sundry London chessers were invited to suggest moves for an on-stage game between characters Livia and Mother. It was the subject of the first part of this post, and the Seconde Parte.

By the way, Middleton loosely based his play on the real-life intrigues of the de' Medici court in 1500s Florence, whose fact-is-stranger-than-fiction back-stabbing, molestation and murder provided him with rich pickings. There are portraits of some of the principals below.

Though she isn't in the play, the Godmother of the dynasty, Catherine de' Medici (1519-89) was, according to Marilyn Yalom (2004), "known to be an excellent chess-player" and promoted the game in the French court after she married her way into it. A contemporary was Sofonisba Anguissola of Chess in Art X, otherwise the nearest I could get to something relevant is this, from Italy around 1535. 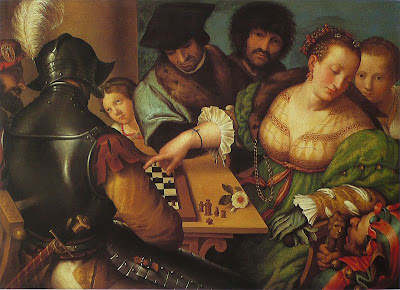 At first glance it looks like one of those courtly scenes of chess as a fashionable pastime, with Eros sublimated and lying limp in the wings. But, as befits a raunchy Women Beware Women context, this really is in yer face, full-on, and PG only.

There's some rather risqué play off the ball (to indulge in a little Middletonism) that begins on the left - see the meeting of the eyes suggestive of rather more with the hands - and continues under the table - consider where the good Knight has pleasingly nestled his knee. The diminutive jester is obviously up to Puckish mischief, with knobs on. The Lady's stake in the game is the white rose of her maidenhood, cherry-centred. But she is distracted (an echo of Mother in WBW); the little fellow has caught her attention. He must be reminding her of some tasteful favour she bestowed on him. Perhaps that baton (the one he's holding) with head. Oh yes. Ooh yes. Oooh YES! Yup, that must be what she gave him. Whatever. The respite would give the black Knight time to rearrange his bits and get on top. Stop it, Middleton! Enough already...(but, see note)...

As we reported last time, the National Theatre production used a game with a period coffee-house flavour (if that's not an anachronism) brewed up by Nigel Blades from Greater London Chess Club. Nigel kindly gave us the moves in a comment to our post, and you can see it, complete with his witty use of hot C17th opening theory, here. It is aligned to the verbal sparring, and punning, of the script - remember that apparently a rook was called a "duke" at the time, and that Livia challenged Mother as a ruse to distract her from safe-guarding her daughter-in-law Bianca, whom the Duke, having "bestirred himself" (you don't need any more help with that), then set about seducing (as we might euphemistically put it). 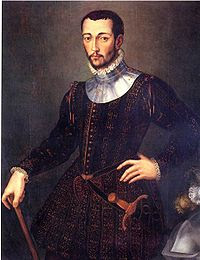 As we have discussed before, there is much multi-layered interplay between the dialogue, the chess action, and the goings-on in the Duke's lair; including the use of the archaic, and thankfully obselete, term "blind mate" by Livia. Nigel's terrific game, rattled out on stage blitz-style, didn't seem to refer to this element of the script. Our own cumbersome effort (see Seconde Parte), on the other hand, included two instances of what we took, back in February, "blind mate" to be: A mates B without B realising it. Thus we had Livia "blind mate" Mother twice, as per the text, the latter repeatedly losing her game on the board, while her daughter-in-law, Bianca, was reportedly losing her virtue on the balcony.

It is here that our blog can modestly claim to have carved one more nick on the bedpost of enlightenment when, based on impeccable sources, it brought to the attention of anyone still awake the proper meaning of the term "blind mate", to wit: A mates B without A realising it; which is diametrically opposite from what we had been led to believe. On reflection, this must be right. An accidental victory, in the cockpit of knockabout C17th drinking-den chess, would surely attract a special term of disparagement. A "blind mate" says that A won more by luck than judgement; no small matter when there's more than victor's laurels at stake - dosh, for example.

The credit for revealing the truth goes to Paul Yachnin in 1982, based on an exposition of the manners of C17th chess laid out by one Arthur Saul in 1614. All we did was rescue Mr. Yachnin's paper from obscurity and draw it, thanks to ejh's presence of mind, to the attention of Emeritus Professor Ronnie Mulryne who wrote the authoritative guide to Women Beware Women (see note). 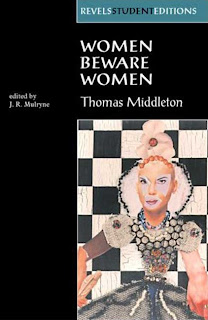 Only £5.99 from all good bookshops

Since the last post Prof. Mulryne has generously e-mailed to thank us for the tip-off, and to suggest that, after Paul Yachnin, we might get a mention in despatches, which would be a nice little feather in our cap.

But, now that the correct meaning of "blind mate" has been recovered, Prof. Mulryne has the unenviable task of revising the annotations in his guide to make sense of Livia's now properly understood use of the term: which is that it was she who didn't see the possible mate that could have cost her the game. But that unfortunately would, as Paul Yachnin put it, contradict the sense of the scene: failing to see everything on the board destroys the metaphor of Livia overseeing everything off it.

How then to square the circle? I hesitantly offered Professor Mulryne my twopenceworth on the matter with the suggestion that Livia's line "I have given thee blind mate twice" should be construed as "I gave you the chance to give me blind mate twice" with the unspoken implication "and you, hapless woman, couldn't win, even by accident, at all, even though it was right in front of you, not once, but twice." Which cranks the meaning round another 180°, back to where we thought it was, so as to give the effect we initially supposed: that Livia was all-seeing in the game, and was in über-control of the seduction. Admittedly though, this application of semantic sticking plaster requires a painful realignment of our everyday understanding of the words. 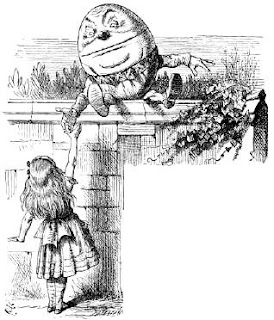 "When I use a word, it means just what I choose it to mean -- neither more nor less."

Prof. Mulryne was kind enough to call my suggestion "ingenious" (though I'd have been even more delighted had he suppressed the first syllable). However, he pointed out that such epistemological gymnastics might be impossible to portray on the stage. Still, as a star-struck innocent abroad in these matters I'd like to think that, if left to the heavenly Harriet Walter (who plays Livia at the NT), it might be conveyed by a telling nuance of her exquisitely chiselled eyebrow. Mark you, if I understood him correctly, Prof. M. concedes the same doubt about his own possible re-interpretation, so we shall have to await his next edition to see how he finally resolves the conundrum.

He also remarked on the "mind games" Middleton has his characters play in the chess game scene; rather presciently, we might add, considering the shenanigans of Topalov/Kramnik/Anand and others of that ilk, whom Livia and Mother knock into a cocked hat.

So, thanks again to Professor Mulryne for engaging with "our humble and obscure blog" (as ejh put it with due modesty somewhere, recently), and I hope I have not misrepresented him. And on the theme of concoctions there is yet another titbit, or two, to be told in the Fourthe Parte of this post. So, if you've got this far, please come back for more in a week's time.

Notes/References
Women Beware Women; Thomas Middleton. Edited by J.R.Mulryne. 2007. Manchester University Press.
The Birth of the Chess Queen. Marilyn Yalom. 2004. Pandora Press.
In his Art échecs et mat (2008, Imprimerie nationale Éditions) Yves Marek comments, if I've got the French, thus on the Campi picture, un peu po-faced: the game symbolises feminine superiority over man, here armour-clad but dominated, and trying not to show it. Quite so, but I think M. Marek has missed most of the fun.
The Yachnin and Saul references were given in the Seconde Parte.