The British Championships kick-off in Canterbury this afternoon and since we at the S&BC Blog consider this an event worth celebrating we’re going to abandon our usual Mon-Wed-Fri-Sat schedule and publish a British-themed post every day from now until it’s all over. OK, we actually started this yesterday but today we’re beginning our coverage of the event proper with a look at the top end of the Championship – who the contenders are, who’s missing and why the late entry of some GMs as well as the complete absence of others could potentially mean very bad news indeed for British chess in the not to distant future. 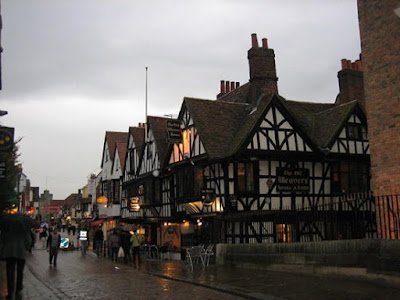 The big story, needless to say, is that Michael Adams is playing at the Championships for the first time for ages (by which I mean I think it's the first time since 2001 but I haven't got around to checking it). Adams, who is following in the footsteps of the likes of Ray Keene, who played at Brighton in 1982 (finishing 3rd=) after an absence of almost a decade, and Nigel Short, who waited 11 years after Swansea 1987 before coming back to win in Torquay, must be the big favourite. True, his rivals will be much more used to playing for a win with the Black pieces in the rough and tumble of a Swiss-system tournament but presumably his 200 point elo advantage over the field will more than compensate for that disadvantage. We shall see.

Mickey’s competition for the crown has turned out to be a good deal tougher than looked likely just a few weeks ago. The presence of one of the world’s elite combined with the ECF not providing appearance money for GMs perhaps making this year’s event a somewhat unattractive prospect, not many pros had signed-up by the 15th June when Keith Arkell [I, II, III] posted this message on the EC forum:-

I spend most of the year playing in "smaller" tournaments than the British, and getting paid to do so.

The prospect of moving from the seaside (where I live now) to Canterbury, to do my job for 2 weeks and take the risk that if I perform badly then I will make a loss of 800 pounds, strangely does not appeal to me ...

I don't pretend to be anywhere near the class of Mickey of course, but as private sponsorship appears to be the way forward this year, 800 pounds is my price .... 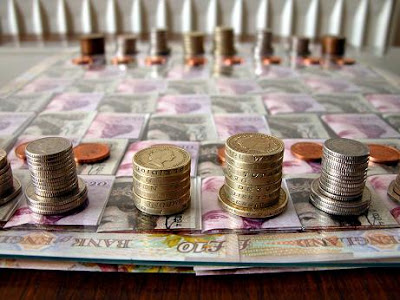 Happily Keith eventually received sponsorship (from one of his chess clubs it seems). Whether private funding has been provided for anybody else I don't know but Canterbury's top dozen starters by elo rating will be:-

... last time. Mark Hebden and The Corporal will definitely be missed but this year's line-up isn't looking too bad at all as things haveturned out. It could have been quite different though; Nick Pert (2nd seed) and Danny Gormally (7th) weren't listed to play as late as Saturday afternoon. 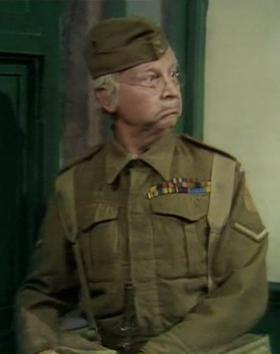 Gawain on being asked if he fancied a trip to Canterbury this year.

Do these late entries matter? I rather think that they do, not so much for Canterbury but for what it might lead to in future championships.

Fewer of the country’s top players means the tournament becomes less attractive to IMs and fewer of those makes it less appealing still to the untitled qualifiers – i.e. the folk whose £200 entry fees fund not just the British Championship itself but the whole two week shebang for everybody else.

Right now there's (some) private funding around now but what happens if it disappears and the GMs who've benefited from it decide to ply their trade elsewhere? What happens if the residual prestige of the British Championship title starts to dry up and the grandmasters who entered late this year decide not to repeat the trick in the future?

It’s hard to imagine that the 2000-2300s will continue to fork-out what would otherwise be considered to be an exorbitant sum to enter a chess tournament if (a) their chances of meeting titled opposition are drastically reduced and (b) the status of the championship as a whole is all but destroyed by the absence of the strongest players. No doubt times are hard but I hope that the ECF will make every effort to be able to provide appearance fees for Grandmasters again in 2011. If they don't I fear we may be heading for a period of decline for our Championship tournament. 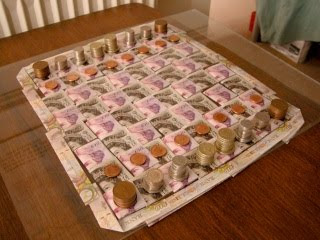 Enough doom and gloom - back to Canterbury. We’ll be keeping a close watch on the progress of our recent interviewees GMs Arkell and Williams [I, II, III], Adams too of course, and we also hope to be able to throw an eye witness account into the mix as well. In the meantime, good luck to anybody who's playing at Canterbury today ... and don't forget we'll be back sooner than usual. Having started with the top end of the championship, tomorrow we'll be returning with a look at the tournament as a whole.

CREDIT:
Photos of the Money Chess Set taken from thechessworld.com
Posted by Jonathan B at 8:00 am

Meanwhile I'm pleased to report that with or without the inverted commas and with our without the extra s, the top result for a British Chess Championship search is here. Hurrah!

I notice Terry Chapman in the starting list - is that the bloke who played Kasparov at odds a few years ago? He's improved a bit.