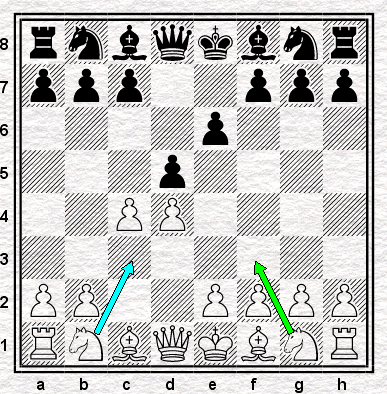 Topalov v Anand, world championship match 2010, Sofia, game 12.
Position after 2...e6.
It seems strange to be writing about the last game of the world championship two months after the event, but I was waiting for New In Chess, hoping that it might shed some light on something that puzzled me about the final game. Alas, no such enlightenment was forthcoming and so I'll ask the question myself, here: why did Topalov play 3.Nf3?

To understand this question at all, you probably need to be an advocate of 1.d4, or at least somebody who plays 1.Nf3 and 2.d4 as I very often do. This would put you, and me, in a minority at club level and even among that minority, I would guess that not quite everybody is aware of all the merits and demerits of either choice. So I hope the following digression will merit either your attention or your forgiveness.

You'll appreciate that the question is not which move is better, but which options are retained, or lost, for either player, if one or other is selected. 3.Nc3 abandons some possibilities which 3.Nf3 retains, and we'll get on to these, but let us begin with what it gives White (and threatens to impose on Black) that 3.Nf3 does not, which is two different kinds of exchange variation, both of them a little uncomfortable for Black. These are: 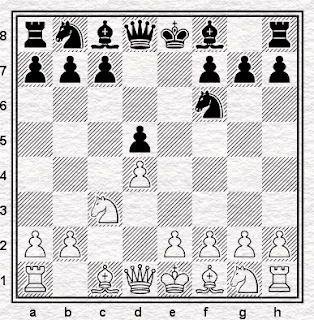 This is a position which has been seen thousands of times in grandmaster play, but which has not been much seen at the highest level in recent years. We can probably assume that Anand would not have gone in for it, and certainly that this position would not have constituted a reason for Topalov avoiding 3.Nc3 rather than choosing it. 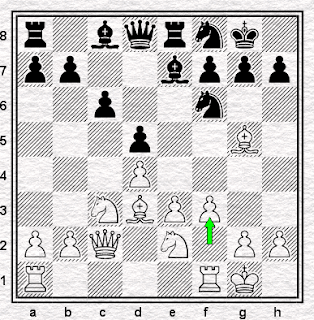 3.Nf3 obviously deprived White of this, the most dangerous option. That's easily understood, though it may be less obvious that it also deprived him of the second most dangerous line: that is, the best possible version of the Exchange Variation with Nf3. How so? Because if the development of the g1-knight is delayed, White can obtain the best possible arrangement of the other pieces first, notably the Queen and white-squared bishop. Hence after, say, 5.Bg5 Be7 6.e3 c6 (not 6...Bf5? 7.Bxf6 Bxf6 8.Qb3!) 7.Qc2 Nbd7 8.Bd3 O-O 9.Nf3 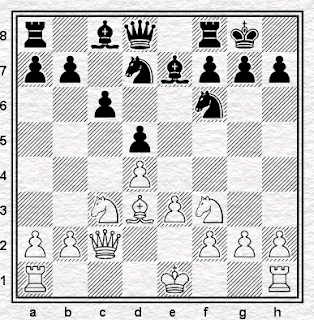 and you will have realised that the sequence has been designed to prevent Black's bishop coming to f5. Black is OK, but passive. White has the formation he or she has played for. 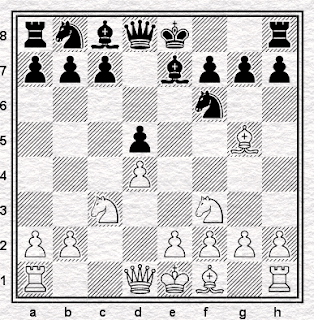 then White can't get that ideal arrangement of queen and bishop because Black has 6...c6 and now either 7.e3 Bf5 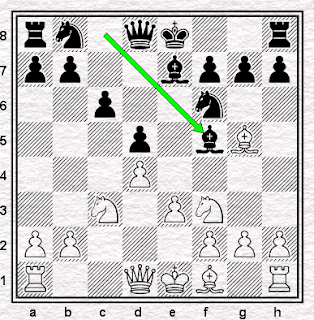 which is job done, as far as Black's concerned, or if White tries to keep the bishop away from f5 with 7.Qc2 there is 7...g6! and it will get there after all. 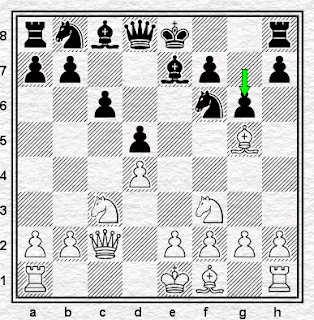 The resulting position isn't lifeless - I've lost on the Black side of it - but it isn't troublesome for a good player. Black should not struggle to equalise and White would not aim for this position if he or she were looking for a win.

Please be aware that there are various tricks and complications that I've not gone into here for fear of inducing excessive boredom in the reader - a still-useful guide is Sadler, Queen's Gambit Declined, Everyman, 2000 - but the basic point should be clear enough, which is that if you want to play the dangerous lines of the Exchange Variation, you have to play 3.Nc3*.

If you do, Black has one further trick already mentioned above, which is to play Alatortsev's 3...Be7 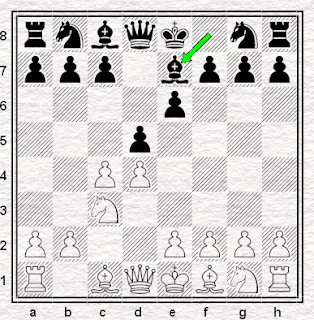 which prevents the bishop coming to g5 for the moment, and thereby proposes that play proceeds 4.Nf3 Nf6 5.Bg5, or 5.Bf4, which sequences bring about mainline Queen's Gambit Declined positions, but with the Exchange Variation nicely sidestepped.

However, it's not all good news for Black, since White's not obliged to accept these transpositions and may instead prefer, as mentioned above, 4.cxd5 exd5 5.Bf4. The bishop doesn't go to f4 in the Exchange Variation with 3...Nf6, for a couple of reasons - one of which is that after 4.cxd5 exd5 5.Bf4 Black would have 5...Bd6 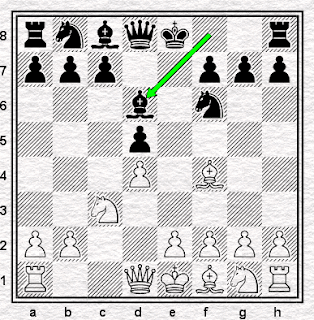 swapping off black-squared bishops, almost always a desirable objective for Black in the QGD where he or she is a little cramped and wishes to ease the problem with exchanges. But after 3...Be7 4.cxd5 exd5 5.Bf4 the option isn't available 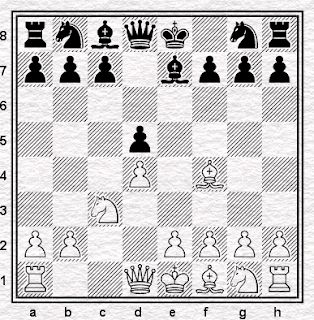 not so much because Black would lose a tempo, but because 5...Bd6?? drops the d-pawn.

That doesn't make the position above at all terrifying for Black - Karpov, for instance, played this variation very successfully against Kasparov on several occasions - but again, it cannot have been for fear of this that Topalov played the g1-knight out first. Two reasons:

(a) current theory does seem to consider White a little better and it's not presently being seen much at high level;

(b) possibly more to the point, White has, as mentioned, the option of transposing to the very line which was actually played in the game. 3.Nc3 Be7 does not prevent what he was willing to play.

So from what we have above, everything seems to be in favour of 3.Nc3. So why didn't Topalov play it? It's not so simple, of course, but as far as I can see, there are two major reasons for preferring 3.Nf3 (which, to tell the truth, is the present writer's choice) of which one wasn't Topalov's intention - leaving the other, which is the puzzle.

The first reason for preferring 3.Nf3 is that it permits White to play the Catalan with 3...Nf6 4.g3 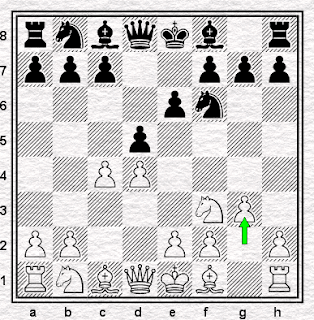 which is probably White's normal preference at super-grandmaster level these days, but which wasn't Topalov's intention, because he didn't play it. So we have one other major possibility - that Topalov didn't like the sequence 3.Nc3 c6. 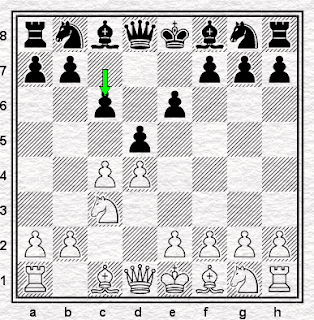 This is kind of an accelerated Semi-Slav: the position above is sometimes referred to as the Triangle Variation, of which there are two versions, this being one and the other occurring after, of course, 3.Nf3 c6. 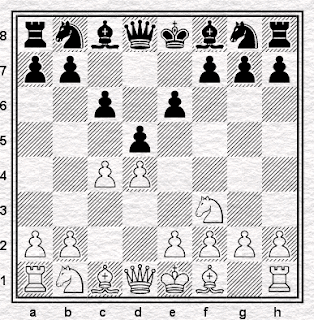 This joins the considerable number of variations mentioned in this article which can be filed under Playable But A Little Inferior: the problem for Black is that while after 3.Nc3 c6 there's an awkward threat to take on c4, after 3.Nf3 c6 White can play simply 4.Qc2 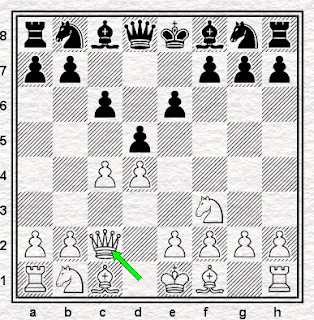 and Black has committed to the Semi-Slav formation perhaps just a touch too early, giving White the chance to select a flexible formation that normally, because both knights have been developed (e.g. after 1.d4 d5 2.c4 c6 3.Nf3 Nf6 4.Nc3 e6) is not available.

The version after 3.Nc3 c6, however, is a different game entirely. White has to think about the threat to c4 and can either choose 4.e3 - when Black normally plays 4...Nf6 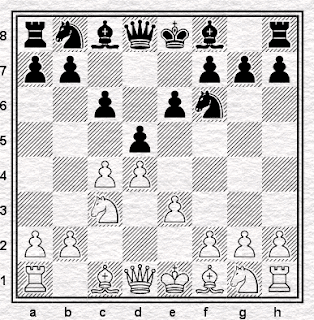 and gets a Semi-Slav in which the most dangerous line with 5.Bg5 is no longer available - or 4.Nf3 in which case Black can either play back into a Semi-Slav with 4..Nf6 (with 5.Bg5 now possible, of course) or can accept the dare with 4...dxc4 reaching the incredibly complicated Abrahams-Noteboom Variation 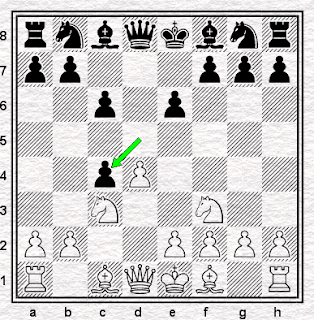 which Black on current assessments has no reason to avoid.

So Topalov avoided 3.Nc3 in order to retain the option of 5.Bg5 in a potential Semi-Slav? Well that's possible - and in fact, given that the game proceeded 1.d4 d5 2.c4 e6 3.Nf3 Nf6 4.Nc3 Be7, I think that's probably what happened. But there's still a puzzle! Because if White was afraid of Black's extra options after 3.Nc3 c6, why didn't he think Black would be afraid of White's extra option? Because if 3.Nc3 c6 White can play Marshall's Other Gambit with the very dangerous 4.e4! 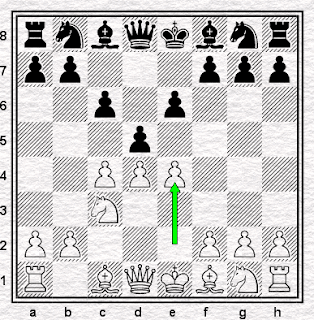 Very dangerous, that is, for both sides - but surely more dangerous for Black than White.

This is what's been puzzling me. Because after 1.d4 d5 2.c4 e6, if White chooses to develop the b1-knight first, Black is either obliged** to allow one of the exchange variations investigated above, either of which would give White a slight edge - or he can take a punt on the Marshall Gambit, which many White players choose not to play, for fear of being out-prepared in the complications, but which scores well for White. When White has the nerve and the preparation to go in for it.

[** for the purpose of this article I've not gone into the Tarrasch Variation with 3...c5, but I don't believe for a moment that Anand intended it or that Topalov feared it.]
Posted by ejh at 7:55 am

Ah ha! I had no idea Qc2 was such a nuanced idea. & I wonder if Topalov just didn't think to try the Marshall.

Superb post, very clear to this 1 e4 player. I love this sort of move-order stuff.

It's a nice post, but you're mistaken about the Marshall Gambit - Black has done just fine there. It's more dangerous for Black at the club level, but at the professional level White had nothing in this gambit, at least the time I looked.

"Fear of any kind - that's not Veselin Topalov" ...well... The whole reason he played the last game so badly was because he was very much afraid! He was afraid of going to the tiebreaks because he knew he had no chance to beat Anand in that case.

Maybe he just wasn't expecting the QGD, and didn't have anything specifically planned against it...

Richard - well yes, I bet he was well surprised by 2...e6, precisely because (contra Anonymous) the Marshall Gambit is pretty rare at the top level* as far as I'm aware. So presumably he must have thought well, Anand must have something (just as, he may have thought, Anand had that Vienna Variation prepared against Kramnik) and so he avoided it. And presumably Anand did have something. But what, I wonder? And I think Topalov blinked first in deciding to not to see it. Which kind of backs up Matt as far as fear is concerned - but if a draw was an unacceptable result, wouldn't the Marshall be a better way of going about it than the QGD?

I thought about this some more over the weekend. My guess is Topalov went down a mainline because up to this game, he'd been doing well as white in the mainlines with 1.d4.